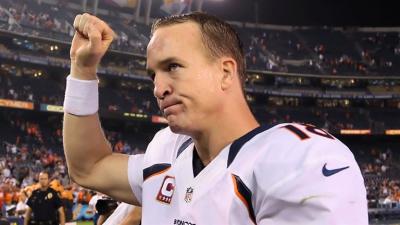 Ask not, Peyton manning, for whom the bell tolls – it will toll for thee this Super Bowl Sunday.

Since he can remember, Peyton Manning’s focus has been consumed by what was next in his career as one of the finest quarterbacks to ever play football.  Putting that away and moving on to what is next in his life will be excruciating, but the time will come Sunday night for Manning to do exactly that.

There will be pangs of regret fueled by questions that rattle around in that huge noggin of his as to whether Manning might be able to wring out one more season from his aging and increasingly creaky body.

Reports persist that Manning has already made the decision to ride into the sunset after Super Bowl L, and that is the correct audible by a guy who has earned a handsome living checking down at the right time since being drafted #1 overall in 1998 by the Indianapolis Colts.

If Manning needs a little help with a list of pros and cons as he weighs the wisdom of pulling the plug on his hall of fame career, I have 10 compelling entries for the con column right here:

10 – The fastball is gone, and the change-up will be next.  Manning can still deliver the ball to the perfect spot, but he needs to release it before the receiver begins his cut.  So far so good as there is still enough velocity on the ball to keep defenders from running under his passes like they are weak punts.  Guile can only get a quarterback so far, and Manning has gotten to exactly that point.  If he loses any more velocity, the ball might fall backward out of his hand.

9 – Quick feet are slowing too.  Never gifted with great speed, Manning has always labored to leave the pocket and threaten defenses with his legs.  He has always had, however, the ability to hop and shift quickly in the pocket to avoid getting hit.  That attribute is leaving him too.  At some point, he will be a sitting duck for defensive linemen looking to make his bones by taking out the Sheriff.

8 – Hip replacement surgery.  Manning revealed to the media this week that he was told by a doctor that hip replacement surgery awaits at some point down the road.  Knowing that your body is already showing signs of advanced deterioration prior to turning 40 should cause Manning to shift toward a comparatively sedentary lifestyle.

7 – Brand as a winner is now at its zenith.  Manning will be paid millions to tell audiences how his way of life led to an unprecedented level of on-field success.  That’s a valuable legacy which would be put immediately at risk by signing with another team for a season that could wind up a 4-12 debacle with him being removed because of ineffectiveness.  Manning should enjoy his cash and not risk his brand that conveys the essence of success.

6 – 40 is the age to put away childish things.  The athletic world belongs to young men and women, and 40 is the threshold where the life’s pendulum swings past the axis separating young from old.  Manning will turn 40 on March 24.

5 – There are perfect exit moments and this is one of them.  The Thrilla in Manila would have been a magnificent final fight for Muhammad Ali, but he lingered and withered.  Johnny Unitas won the Super Bowl after the 1970 season, and then declined quickly and irrevocably through the 1973 season as a backup in San Diego.  Timing is everything in life, and timing dictates Manning’s exit Sunday night.

4 – Playing for the Rams will not be worth it.  There are reports the Los Angeles Rams would like to sign Manning for one more season.  The Rams haven’t gone to the playoffs since 2004, nor have they posted a winning record since the season prior to that.  Going out as a soft-tossing game manager for a franchise that has shown a generational inability to win is no way to end a career – especially under the bright lights of a new home.  The 1977 season of Joe Namath – his last in the NFL – stands as a monument to the lack of wisdom in following this path.

3 – Recovery from neck and back surgeries is not aided by repeated collisions with large, fast, angry men.  Our hard wiring runs through the spine in the back and neck.  Arm and leg issues can be easily corrected, but spinal injuries put people in wheelchairs.  At some point, the return on investment is outweighed by the risk, and that point will come on Monday – if it hasn’t already.

2 – Hard to top this finale.  A trip to the last single letter Super Bowl for a half century is a pretty cool moment to call your last as an NFL quarterback.  Knowing he is very unlikely to be invited back to the Broncos for a variety of reasons, Manning would have to find another suitor who has all the pieces minus a game-managing QB to wind up in another Super Bowl.  I don’t see a team with that dynamic in the NFL right now.  This is a fitting send-off to one of the best to ever play the game.

1 – CTE seems a virtual certainty.  The percentage of deceased pro football players whose brains have been donated for study that suffered from CTE tops 90%.  If you need a reason to retire at the age of 40 and enjoy every single day of the rest of your life, this is a great one.  It stands to reason that only those with symptoms would consider donating their brains to science, but the report that former Raiders quarterback Ken Stabler had advanced CTE is the latest piece of bad news that should resonate for Manning.