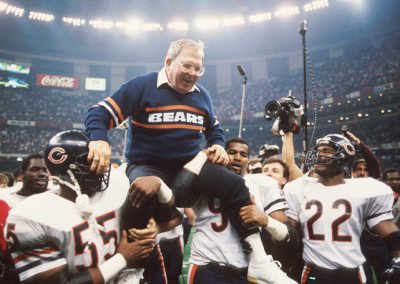 Buddy Ryan carried off the field after Super Bowl XX by members of the best defense ever assembled.

Last night, a thoroughly enjoyable look back at the 1985 Chicago Bears aired as part of the ESPN 30 for 30 series.  It documented the season of grace enjoyed by the team, city, and fans as they tracked perfection – not in record, but as a play by play objective.

They captured America’s imagination 30 years ago with fury, diligence, and minus one miserable night in Miami – a level of perfect football that has never been seen in the NFL.  They were – and are – known simply as the ’85 Bears, who tore through a lone Championship season with style charisma, and love for one another.

The Bears were not the team of the 1980s.  That distinction belongs to the San Francisco 49ers, but ask fans and experts who the best team of all-time is, and that group of Bears are always mentioned at or near the top of the list.

One of the few teams to not only believe in their own excellence but compel others to accept it as fact, the Bears tirelessly chased greatness, and finally caught it for three months before it finally wriggled free as it always seems to.

Here are the 10 reasons we still talk about the 1985 Chicago Bears:

10 – Minus the aberrant loss to the Miami Dolphins, the Bears outscored opponents 360-82 in final 13 games of season.  Including the playoffs, the Bears thoroughly dominated the NFL in a way no post-merger team ever has.  This team wasn’t about winning – it was about milking the best football possible out of each play.  The result was a level of football that still defines excellence.

9 – Against the Falcons, the 1985 Bears collected more sacks than Falcons QBs completed passes.  On it’s way to allowing an unfathomable -22 yards of passing offense, the Bears terrorized quarterbacks David Archer and Bob Holly for five sacks which led to 38 yards lost.  They completed 3-17 passes for 16 yards.  This was in a game the Bears won 36-0 that seemingly left the Falcons no option but to throw, and yet they couldn’t.

8 – Numbers of current Bears still evoke 1985 roster.  When I watch the current bears, and see #50, I think of Mike Singletary.  I see #99, it isn’t LaMarr Houston – it’s Dan Hampton.  And #72 is still William Perry, not Charles Leno.  It’s not just the stars either.  Even a great player like running back Matt Forte, who wears #22, is just borrowing the late Dave Duerson’s number.

7 – ’85 Bears forced at least two turnovers in 16 of 19 games.  Including the three playoff games, the Bears defense failed to generate a turnover only once totaling an astronomical 64 takeaways.  As a comparison, the 2015 Bears notched only 17 fumbles and interception, and the Colts only had 25.

6 – During four games in November, the Bears defense outscored opponents’ offenses 18-13.  Two defensive touchdowns and two safeties accounted for more points than the Green Bay Packers, Detroit Lions, Dallas Cowboys, and Atlanta Falcons offenses.  The defense of the Bears brought making offenses uncomfortable to a historic level during a month in which they outscored opponents 84-13.

5 – Thirty years later, the most famous Bears in Chicago are not the current players.  Walk into a sports bar in Chicago and ask anyone how many current Bears they can name.  Then ask how many 1985 Bears they can list.  The 1985 list will be longer for almost all.  If an event featuring members of the current team was held in a room adjacent to that of a 1985 Bear reunion, the crowd for the Bears of 30 years ago would dwarf that of the temporarily relevant team.

4 – Walter Payton was arguably the best football player in history, and he is a footnote on this team.  First ballot Pro Football Hall of Famer Walter Payton ran for 1,551 yards for the 1985 Bears.  Even so, the stars of this team had nothing to do with “Sweetness”.  The was a team of Mongo, Danimal, Iron Mike, Fridge, and the Colonel.  Payton was relentlessly excellent through his entire career minus his first and last season.  Payton’s work ethic shaped this team’s culture, but the defense is the reason people are still fascinated by the ’85 Bears.

3 – Super Bowl XX still boasts the highest TV ratings in history.  This was not expected to be a competitive Super Bowl, and it wasn’t.  According to pro-football-reference.com, at the end of the first quarter, the Bears were a 93.7% favorite to win the game as they led 13-3.  Still people watched as that lead grew to 44-3.  Because of this group’s charisma and relentless pursuit of greatness each play, they captivated regardless of their dominance.

2 – This is the only team to carry two coaches of the field after a Super Bowl win.  The ’85 Bears really had two head coaches – Mike Ditka and defensive coordinator Buddy Ryan.  Ditka coached the offense, and Ryan led the defense.  Retained by owner George Halas after the firing of the previous coaching regime, Ryan didn’t answer to Ditka.  Ryan knew it, so they operated in two separate universes that often collided.  For Colts fans who believe peace and harmony between GM Ryan Grigson and coach Chick Pagano is the only road to success, they need to bone up on the contentiousness that existed with the ’85 Bears.  Ryan reportedly kicked Ditka out of a defensive meeting by throwing a chalkboard eraser at him.

1 – We are still talking about this almost mystical collection of talent and personalities in 2016.  It’s said that the quality of a presidency only begins to come clear after 50 years following his exit from the White House.  The greatness of a football team is similar.  The brand awareness of the ’85 Bears continues to grow.  For me, I can still name more members of the 1985 Bears than any non-Colts team in the history of the NFL.  They are NFL royalty because they were unique in result and personality.  There was no single star on this team.  it was – and remains – a brotherhood of men who were dedicated to the pursuit of greatness.  They caught it for a short and sweet period of time 30 years ago, and we always remember the truly great.