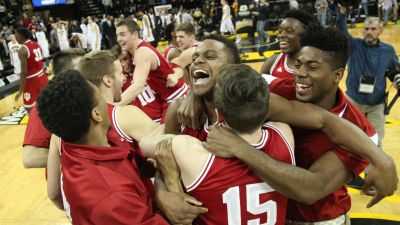 Hoosiers celebrate their Big Ten Championship after holding on for a win at Iowa.

Indiana got it done last night.  They had chances to turn that 14-point lead into a loss, but finished Iowa to clinch the regular season Big Ten Championship.

That’s a hell of an accomplishment for a team that spent the last three seasons failing to meet the expectations they promoted to fans and media.

With a schedule front-loaded with cupcakes, and few serious tests until the final seven games of the Big Ten season, it looked to most like the Indiana Hoosiers would be a fool’s bet to finish strong.

Losses in Maui to Wake Forest and UNLV did nothing to calm fears that this would be yet another Indiana team that showed promise, but couldn’t close the deal.

When the Hoosiers beat Iowa – a good team with everything to play for on an emotional senior night – they showed that this will not be a redux of the previous Indiana teams that underachieved as a the schedule flipped to March.

The Hoosiers awakened this morning at least 2 1/2 games in front of the posse of the six teams chasing second place.

There is still plenty of work to be done, but it isn’t too early to take a look back at the 10 reasons Indiana is playing its best basketball this season at the time it regressed in 2013, 2014, and 2015.  Here they are:

10 – IU keeping it simple.  When things looked bleak for Indiana, it appeared players were confused on both ends of the floor.  Complication yields confusion, and basic yields confident and repeatable performance.  Tom Crean simplified the action on both ends, and the Hoosiers responded by performing at a higher level.

9 – Hoosiers have found a way to finish close games.  Indiana has won seven of nine Big 10 games this season that were decided by a single-digit margin.  In close games, the little things are massive, and Indiana is much better at little things – blockouts, talking, setting a good screen, getting in a stance, recovering correctly, etc…  Those aren’t really little things – they are huge – but the teams who have five guys committed to doing them often tend to win a lot of close games.

8 – Thomas Bryant is improving defensively.  Over the course of the season, Bryant has gone from being a horrific hedger to being decent at it.  Attacking Indiana early in the season was simple with the pick and roll because Bryant recovered so poorly.  Not anymore.

7 – Grad transfer rule has been used very well by Crean.  Imagine this team without the production and stability provided by seniors Nick Zeisloft and Max Bielfeldt.  it isn’t pretty.  Zeisloft and Bielfeldt have combined to hit 80-186 three-pointers this season, and it isn’t the tonnage as much as the timing of those makes that have benefitted IU.  Last night, they were 5-7 from behind the arc in a game won by three points.  Against Purdue, Bielfeldt had 10 points and six boards in a four-point win.  A couple of weeks ago, Indiana beat Iowa at Assembly Hall by seven.  Zeisloft and Bielfeldt combined for 19 points.  How about the Big Ten opener at Rutgers where Bielfeldt had 18 in a seven-point win?  Start doing a little math, and you realize that without these two graduate transfers, this season would have unspooled in a very different direction.

6 – Troy Williams is subverting individual goals for team.  An NBA level athlete, Williams has gone from being a player who appeared more motivated by SportsCenter highlights that might get the attention of NBA scouts to a more restrained version of himself who takes great pleasure from team success.  That’s my take from a distance, but over the last three games Williams has turned to ball over twice.  That’s a marked improvement over his past as an empty possession/highlight reel machine.

5 – Soft schedule.  Indiana can’t be blamed for having a favorable Big Ten schedule, but it can’t be denied that they have benefitted from it either.  Playing the 105th toughest schedule in the nation and the 13th toughest in the Big Ten has its perks.  The Hoosiers were required to play Michigan State, Purdue, and Maryland only once.  The unbalanced Big Ten schedule giveth and taketh away, and this year it gave to IU.  Not only does the easy schedule make it easier to stack wins, it allows players to save gas for March.

4 – Commitment to defense followed James Blackmon Jr’s injury.  It’s not a coincidence that Indiana got better defensively when Blackmon has season-ending surgery – in part because the team knew they lost offense and needed to counter that loss with improved defense.  Schemes are simpler and execution is more exact now that the Hoosiers no longer have a great offensive asset at their disposal.

3 – Spacing and shooting.  Basketball isn’t some mystical game that requires years in a monastery to understand.  If you space the floor offensively, move the ball quickly, and knock down shots, you score points in bunches.  Keep the other guys from doing it, and you win a lot of games.  Minus Troy Williams, every Hoosier who has attempted 10 or more three-point shots this season has made at least 38%, and as a team they have made an eye-popping 42% from beyond the arc.

2 – Yogi Ferrell has been a consistently superb leader.  Not only is Yogi doing the big and little things on both ends of the floor to put Indiana in a position to win, he’s the undisputed leader of this team.  Over the years, we have seen fractured leadership among the Hoosiers, but not this time around.  Yogi is the man Hoosiers look to for guidance, and part of the credit for that goes to Tom Crean for allowing Yogi a significant voice during timeouts and practices.  By the way, nobody in the Big 10 is more valuable to his team than Yogi.

1 – Tom Crean has learned that less is more.  it’s indisputable that hard work yields a positive result, but it’s also true that too much hard work causes physical and mental burnout.  Indiana has routinely reached March exhausted by long practices, extensive individual work, and expansive lectures on game plans and basketball theory.  This year, the Hoosiers look fresh.  Crean has gone to the whip less often, so his team has more left in the tank than their opponents.  It’s to Crean’s credit that he has continued to learn and develop his leadership style in his 17th season as a head coach.