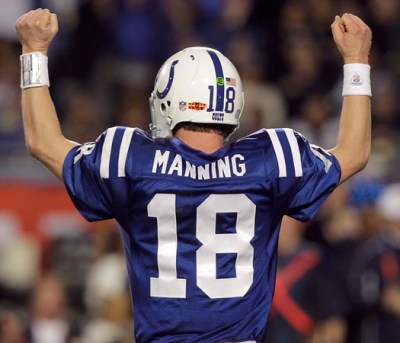 peyton Manning didn’t end his career a Colt, but Indy is where he made his greatest lasting impact.

Peyton Manning’s announcement that his playing days are behind him has sent the media into a reflective frenzy.

Is Manning the best quarterback ever?  Does going out a winner enhance his legacy?  Did the Colts err in allowing Manning to spend the last four years of his playing career with the Denver Broncos?  All these questions without definitive answers.

Let’s talk about some concrete aspects of Manning legacy with definitive answers..

Indianapolis knows Manning best, and has the most to be thankful for.  Our thanks to Manning extends beyond the touchdown passes and relentless regular season success.  This city is different – bigger, better – than it would have been had Colts general manager Bill Polian pulled a different trigger with the first pick of the 1998 NFL Draft.

Bringing Manning to Indy was a game changer for the Colts and its city.  Is Manning the best QB ever?  People can debate that, but there is no doubt he is the most important athlete ever to the growth of a city.

Here are 10 of the multitude of things for which Hoosiers should be thankful to Manning:

10 – Manning taught Indianapolis football.  When Bob Knight coached at Indiana, he spent a lot of energy teaching fans about basketball.  Because of his desire to teach, fans learned at a higher level how the game works.  Manning, in a different way, taught fans how to diagnose defenses.  Fans at the RCA Dome and Lucas Oil Stadium would try to guess Manning’s read.  Through that, we learned about the game at a level many never get the opportunity to.

9 – Downtown restaurants other than St. Elmo’s.  Back in the 1990s and before, getting a good steak in Indy wasn’t easy.  St. Elmo’s was the only option, and even those were a little little sketchy (much better now).  Today, there are great steakhouses all over downtown – Mo’s, Prime 47, Shula’s. Morton’s, Ruth’s Chris, and others.  There are plenty of bars that weretn’t around back then too.  Ike & Jones’s was just about it back in the day.  Without sports as a magnet, downtown would still be a barren wasteland.

8 – Hall of Famers in the Colts Ring of Honor.  Chris Hinton and Billy Brooks are good men who played well for the Colts, but compared to the members of the rings for other franchises, they just didn’t measure up.  Hell, Jim Harbaugh played here for only four years, and somehow he’s in there.  Because of Manning, Marvin Harrison is in the Hall, and Reggie Wayne, Edgerrin James, and Jeff Saturday have a great chance to find their way in.  That raises the level of historical relevance for the Indianapolis Colts far beyond where it was in 1997.

7 – Indy fans became etiquette savvy.  When I moved here in 1993, people in the RCA Dome would yell at fans who dared stand to cheer.  They also cheered loudly what the Colts were on offense.  Manning came in and schooled the fans quickly that cheering the offense should be done after they score, and that standing was just fine.  And those who grew up learning about Indiana’s other game – basketball – invested the time needed to be able to understand the nuances of football.

6 – HS football talent explosion in Indiana.  In the mid-1990s, high school football in central Indiana was fine – a fun diversion for kids.  What it became during Manning’s 13 years as a Colt might be his greatest legacy.  College coaches today target Indiana prep stars in bulk, and certainly in a way that was unimaginable 20 years ago.  Indiana isn’t just a basketball state anymore.

5 – Super Bowl XLI win over the Bears.  Nothing like a world championship to put a smile on the faces of a city’s people, and the lone Super Bowl win authored by the Indianapolis Colts was a huge boost to the morale of a championship starved city and state.  That the opponent was the Chicago Bears made it all the more sweet.

4 – Hosting a Super Bowl.  Without Lucas Oil Stadium, there never could have been a Super Bowl in Indianapolis, and without Manning there would never have been a new stadium (see #3).  Hosting the Super Bowl brought cash and media coverage to the city that continues to bear fruit.  For a town without a waterfront or a memorable skyline, the best path into the hearts of tourists is through integration with the uniquely friendly people here.  The Super Bowl exposed thousands of media members to Indy’s greatest resource – people, and the word of mouth continues to inspire visits.

3 – Lucas Oil Stadium and convention center expansion.  Without the consistent excellence Manning brought to the Colts beginning in 1999, there is no way a publicly funded stadium would ever have been built south of the old RCA Dome.  For another generation Indianapolis fans will enjoy events from Colts games to concerts to motocross to high school football games in a top flight facility.  No Manning, no Lucas Oil Stadium.  The convention center expansion was folded into the building of the stadium, and is a significant economic driver for the city.

2 – Peyton Manning Children’s Hospital.  Now Manning doesn’t administer to the health of sick children, and the facility existed before Peyton’s name was on it, so he didn’t create pediatric care in Indianapolis, but his presence is incredibly important to the treatment of sick children in Indy.  Estimates are that Manning donated $50-million to have his name on the building, and that’s quite a generous gift.  There are 163 beds in the hospital which means that the check written by Manning, and the other contributions generated because of his presence, are helping up to that many sick kids at any one time.

1 – The Colts are still here.  If not for Manning, the Colts would have continued to enjoy only sporadic success and when the time came for the state and city to respond to ownership threats to move, fans would have shrugged in the same way those in St. Louis recently did.  The result would likely have been a move to Los Angeles.  Because of Manning’s relentless work ethic and desire to prepare, the Colts became a team worth keeping – regardless of the $720-million tab for the new digs.