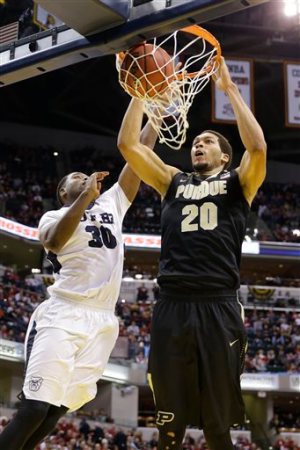 It all comes down to this. March Madness in Indiana is special, and it starts this weekend.

Basketball is a great game 11 months a year, but in March it’s special.

And March starts this weekend.

If you live in Indiana, there is nothing like March.  Starting tonight, even passive basketball fans pay attention to the drama of sectional weekends, senior days & nights, conference tournaments, bracketology, and the Pacers drive for the postseason.

Here are 10 great reasons you should pay rapt attention throughout this weekend of March Madness:

10 – IUPUI is capable of winning the Summit League Tourney.  Jason Gardner’s Jaguars play North Dakota State Sunday at 6p in the first round.  Capable of beating or losing to any of their conference rivals, the Jaguars could be a great story next week.  Gardner is an up and coming coach, and his roster is talented and likable.

9 – The Pacers might host a playoff series, or fall out of the postseason.  Going into a tough three-game in four nights stretch, the Pacers are three games behind the Miami Heat for the fourth seed in the Eastern Conference, and just 1 1/2 games in front of two teams tied for ninth place – just outside the top eight that earn playoff berths.  With only 21 games left, the Pacers need to get cracking right now.  Winning two of these three will put the Pacers in a good spot for the final dash to the playoffs.  Two (or three) losses could be catastrophic.

8 – Saying goodbye to Kellen Dunham and Roosevelt Jones will be very emotional.  Austin Etherington and Jordan Gathers will say goodbye to the Hinkle Fieldhouse faithful too, but it will be the careers of Dunham and Jones that bring tears from both the players and fans.  Senior days are always a big deal, but these two have been so instrumental to the continued success of the program as it transitioned from Brad Stevens to Brandon Miller and then to Chris Holtmann that fans will certainly bring the house down for when those two are thanked for their service.

7 – One more chance to appreciate Yogi Ferrell.  There are very few players in the long and storied history of Indiana University Basketball who have meant more to the program than Ferrell.  Where they would be this season without the most valuable player in the Big Ten is anyone’s guess, but the likelihood is that IU coach Tom Crean would either be elsewhere – or about to be.  Ferrell will extend his records for starts and assists by a Hoosier, and he will have a chance this month to catch Alan Henderson as the seventh most prolific scorer in IU history.

6 – Senior day for AJ Hammons and Rapheal Davis will celebrate two men who showed up in West Lafayette as boys.  Both Hammons and Davis have reimagined themselves during four years as Boilermakers, and both represent all that is great about college basketball.  Johnny Hill, Jon McKeemon, and Stephen Toyra will also be hailed, but the journeys of Hammons and Davis have been very public and fruitful – for them and Matt Painter’s program.

5 – Sixty-four sectional champions will be crowned Saturday night.  Right now, 256 high school teams are alive in the IHSAA Boys State Basketball Tournament.  In 48 hours, there will be 64.  There is nothing like watching seniors in high school strain to keep their careers alive for another week.  The drama of sectional weekend is the highest of the high school season.  The talent level in Indiana is outrageous, so if you attend the sectional at Tech or Southport, you are going to see a lot of kids who will play at the highest levels of college hoops very soon.

4 – Can Ty Lawson fit with the Pacers?  Lawson is a year removed from a season where he finished third in in the NBA for assists, but also less than 14 months separated from the first of two DUI arrests he suffered in 2015.  Lawson was released by the Houston Rockets last week, and the Pacers are going to sign him, according to reports.  There is no doubt Lawson can play basketball, but can he live without endangering others by driving drunk?  This isn’t the first foray by Pacers president Larry Bird into bringing in a very talented but troubled player to help the Pacers win.  Lance Stephenson was a success by most measures.  Andrew Bynum was a disaster.  Lawson is going to tilt the scale one way or another.

3 – Indiana plays a mercurial and talented Maryland team.  The Hoosiers will have a chance to prove – again – they are a team to be taken very seriously in the NCAA Tournament.  That proof will be a big deal for fans, but even more important for the selection committee who will assess the Hoosiers while deciding what seed suits them.  A win against Maryland, and a #2 seed is possible.  A loss will give those who still claim the Hoosiers success is a result of a friendly schedule rather than on-court excellence.  Indiana has won the Big Ten, but their work is far from over in proving themselves.  Competing successfully against one of America’s most talented teams provides a great opportunity.

2 – Purdue might finish second or seventh in the Big Ten.  The cluster of teams following Indiana in the Big Ten is comprised of half the league.  With a Senior Night win at Mackey over Wisconsin, a Michigan State loss to Ohio State, and a Maryland loss at Indiana, the Boilermakers will finish tied for second in the conference.  A double-bye in the Big Ten Tourney would sure be nice for a team that has the size to dominate the boards against anyone.  If Purdue loses, they could tumble into a tie for seventh.  The road to a successful March must begin Sunday night.

1 – Butler is bubblicious.  The Bulldogs NCAA Tournament hopes are in the hands of teams who might pull upsets in conference tournaments unless they beat Marquette tomorrow at Hinkle Fieldhouse.  With every team that unexpectedly wins a conference tournament to secure an automatic bid – let’s pick a ludicrous example and say Rutgers in the Big Ten Tourney – an at-large slot is taken that might have gone to Butler.  A loss to Marquette, and the Bulldogs may need at least one win in the Big East Tournament to claim their spot.  Best to control their own destiny by finishing the second half of the Big East least 7-2 with a win against a desperate Marquette team.