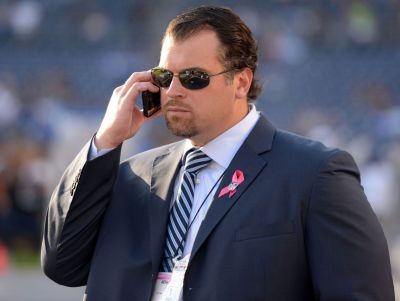 Colts GM Ryan Grigson is working the phones to improve the Colts.

The annual free agent shopping spree for NFL teams starts today at 4p, and while the Indianapolis Colts aren’t likely to be as active as in previous years due to salary cap related financial constraints, it’s still going to be critical for the Colts as they try to regain the playoff mojo that marked the first three seasons of the awkward marriage of coach Chuck Pagano and general manager Ryan Grigson.

To put it kindly, the Colts have needs as their franchise quarterback enters the prime of his career.

The clock is ticking for Luck, and every season lost while at is at the peak of his gifts is a season for which all members of Colts management should be held accountable.

While the Colts won’t spend like they did last year on Andre Johnson, Frank Gore, Trent Cole, Todd Herremans, Kendall Langford, and Nate Irving, the moves made starting today will determine whether the Colts are able to bounce back in 2016, or if they will continue to ebb downward after missing the playoffs with an 8-8 mark in 2015.

10 – Draft focus will be determined by who Colts sign as FAs.  Putting together a mock draft, or at least trying to project whom the Colts might take with the 18th overall pick is a lot of fun – fruitless but fun.  The work to try to guess whose name Grigson with call April 28th will begin after we know who signs during as a free agent.  After the no-brainer pick of Andrew Luck, fans and media would have been better pulling names out of a hat than targeting Bjoern Werner and Phillip Dorsett as Colts 1st rounders under Grigson.

9 – Will Coby Fleener be back, and should he be?  Dwayne Allen was signed to a four year, $29.4 million contract yesterday, which likely blocks a possible Fleener return.  Fleener showed great promise as a receiver in 2014 with 51 catches, and 15.2 yards per catch average, and eight TDs, but regressed last season as his per catch average tumbled to 9.1 yards.  Fleener hasn’t missed a game since his rookie year, but Fleener is a luxury the Colts can’t afford with Allen already earning top 10 TE cash.

8 – If Andrew Luck gets hurt, who steps up?  Matt Hasselbeck retired from football today, and Josh Freeman was released by the Colts last week.  That leaves Stephen Morris and Charlie Whitehurst on the roster as backups for Luck.  Hard to believe the Colts are satisfied with those two as the next best chances for the Colts to compete if Luck gets hurt again this season.

7 – The Colts are set at one corner with Vontae Davis.  That’s viewing the cup as half full as one solid corner is a better scenario than many teams face this offseason.  It’s assumed Greg Toler won’t be back, and while D’Joun Smith was taken early in the third round of the 2015 draft, guessing whether he might be ready to compete is a fool’s errand after six games with one tackle before being placed on injured reserve.  Trusting a rookie to play press corner would be a stretch no matter who is drafted and in what round.

6 –  Is Boom Herron the answer to back up Frank Gore?  Boom isn’t terrible, but as Gore reaches the outer limits of effectiveness at age 33, someone is going to have to augment his contributions in 2016.  Can that be Herron, or will the Colts go after a younger version of Gore in free agency to shoulder part of the load.  Former Chicago Bear Matt Forte may still have some juice in the tank, and like Gore, Forte is an adept receiver and pass protector.  If the Colts don’t sign a FA running back, maybe they target Ezekiel Elliott of Ohio State with the 18th overall pick.

5 – Does Jerrell Freeman return, and if not who plays inside linebacker?  It’s hard to imagine the Colts defense without Freeman.  He’ll turn 30 on May 1, but he is still fast and smart.  The Colts have enough needs to want to avoid creating another because they couldn’t get Freeman to sign an extension.  He’s not elite, but Freeman is plenty good enough to play ILB on a championship level team.

4 – Robert Mathis is 35, and Trent Cole 33.  Both will return to the Colts, but are awfully long in the tooth to be counted on to play at their potential for 16 games.  It’s especially difficult to imagine Cole being a game-changer one season after accounting for a paltry three sacks in 2015.  Mathis is a freak, and might have another great season in him.  Getting to the quarterback is a trait championship teams like the Denver Broncos possess.  It’s an urgent need for the Colts.

3 – Who will help protect Andrew?  Keeping Luck upright is the most pressing need for a team that learned what life is like without their franchise QB.  If I’m Luck, part of my agreement to sign an extension would hinge on Grigson’s promise to find offensive lineman to help keep me healthy.  Having a very expensive quarterback carry a clipboard while his back, neck, kidney, or knee heals assures mediocrity at best.  The Colts are either going to go get a right tackle in free agency or early in the draft.

2 – Too many holes to be plugged with draft.  Grigson currently has a pick in each of the first five rounds of the draft and one in the seventh.  That means six new Colts will be welcomed via the draft.  They need a right tackle, pass rush specialist, cornerback, help on the defensive line, a backup quarterback, and more.  Six new draftees – three chosen inside the top 100 – are not going to make the Colts a Super Bowl contender.  Without some cagey work in free agency, the Colts are going to open the season with at least one glaring weakness.

1 – Jury is still out on Ryan Grigson.  Regardless of the extension that was brokered as part of the  drama at the Colts Complex immediately after the end of the 2015 season, it’s hard to look at Grigson’s draft and free agent track record and be inspired.  Werner was a 2013 first rounder who was cut yesterday.  The trade of the 2014 first round pick for Trent Richardson was another boondoggle.  There have been prescient moves too – the trade for Davis, signing of Freeman, signing of Langford, and middle of the 2015 draft provided great return.  Grigson has neither been good enough to inspire confidence nor bad enough to cast into the abyss of failure, so what happens over the next two months is going to go a long way toward confirming his legacy in one direction or another.