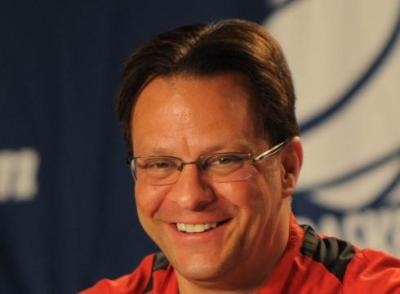 Tom Crean has every reason to smile if the list below is an accurate depiction of the state of the program.

As promised, here is part 2 of the internal dialogue I have with myself regarding the future leadership of the Indiana basketball program.

Yesterday, we dealt with the negative – 10 reasons to replace Tom Crean as coach.  Today, we list reasons to embrace Crean as the right man to coach the Hoosiers.

Regardless of which side of the ledger you pledge allegiance, you must understand an adverse argument can be made.  One area where Crean and at least one of his predecessors share is the polarizing effect they have on the Indiana fanbase.

Here are 10 reasons that Crean is the right coach for the program moving forward:

10 – The organizational workflow issue for the staff appears to be solved.  At least when I sat behind the bench during the too-short visit to the Big Ten Tournament, the lone voice directing the Hoosiers belonged to Crean.  The cacophony of multiple directives during the same event two years ago was impossible for players to understand.  Extrapolating that the workflow confusion in all areas has been corrected is a hell of a leap, but I’m giving Crean the benefit of the doubt here based on the excellent communication during the tourney game against Michigan.

9 – Behavioral issues seem to have been cured.  For 18 months, Bloomington appeared to be a playground for drunken revelry and high times for the basketball team.  Over the last six months, a lid seems to have been affixed to the wayward activities of a team that needed rapt focus to achieve any level of success.  Those who didn’t heed serious warnings were quickly dispatched, and the remaining players grew to understand there is a consequence for self-indulgence.

8 – Times have changed, and the curmudgeon in the red sweater isn’t coming back.  Of course, no one in his right mind would hire Bob Knight to return to Bloomington, but that extends to Knight-level tyrants who refuse to accept that a university is run by the president and not the basketball coach.  Crean has recently grown to understand the collective nature of an athletic department, and that education took eight years.  It would be a shame to start the lessons with a brand new guy who doesn’t understand that he’s not the boss of bosses.

7 – $4-million is better spent on student-athletes than buyouts.  Regardless of whether the $4M comes from the athletic department’s deep pockets or well-heeled donors, that is a lot of walking away cash for a coach who just won a Big 10 Championship.  The program might be inching closer to real success.  Four million bucks is a lot of money to wager it’s mired in March mediocrity.

6 – Indiana could have a ten-deep monster of a roster next year.  If Thomas Bryant, OG Anunoby, and Troy Williams return, the Hoosiers will add three freshmen to immediately help Indiana chase another Big Ten crown and seek March redemption.  Add Josh Newkirk as a pass-first point guard, and IU could have a special group.  Why derail the thing now because of the pipe dream of a coaching upgrade.  is Crean perfect?  No, but the 2016-2017 Hoosiers might be special.

5 – Good may be the enemy of great, but it’s also the enemy of mediocre.  Even by showing an inability to qualify for an Elite Eight after three Sweet Sixteens, the Hoosiers have been a good program over the last five years.  Until this March, the last time Villanova punched its ticket to a Sweet Sixteen was 2009.  Prior to the last two seasons, Notre Dame under Mike Brey had reached one Sweet Sixteen in 14 years. The Fighting Irish just concluded their second consecutive trip to the Elite Eight.  There are opportunities to pivot forward, and 2016-2017 might be the watershed season for Indiana.

4 – Recruiting is on the uptick.  While Crean has not secured elite talent in bulk from Indiana since “The Movement”, OG Anunoby has proven that Victor Oladipo was no fluke.  Oladipo came to Bloomington unheralded and under-recruited.  He left three years later as the #2 draft choice in the NBA Draft.  Anunoby was similarly ignored, and is in a position today to be evaluated as a potential first-round pick after his freshman season.  Once, maybe Crean got lucky.  Twice, he and his staff are beating the bushes and choosing wisely.

3 – How many coaches that might replace Crean would be a better option.  Okay, Crean isn’t Coach K or Tom Izzo, but that level of coach doesn’t exactly grow on trees.  Crean has been good enough to make it to three Sweet Sixteens, win two outright Big Ten regular season championships, and send three players to the NBA Draft as top 10 picks.  That’s a pretty solid legacy as he has built the program from the ground up into an upper echelon team in what is sometimes America’s best basketball conference.

2 – The hug between Crean and Thomas Bryant was a touching sign of respect and love between a player and coach.  When Crean took the time to calm and reassure Bryant, it was a player relying upon his coach for exactly what he needed at that moment.  Some players need a kick in the ass and others need a hug.  From some who were in the room when this PDA transpired, it was said to be a lovely moment.

1 – Re-starting from jump street would set the program back years.  Unless exactly the right coach is selected, the program would require an almost complete reboot.  If the outcome isn’t substantially better than what Crean has provided, there would be no bounty for the lost years.

To read part one, the 10 reasons Crean should be replaced, click here.