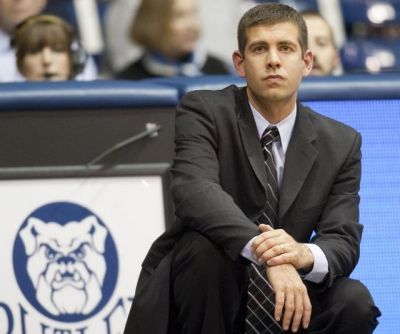 Brad Stevens was the head coach at Butler for only six years, but what a six years they were!

There may come a time when Frank Vogel, Mike Brey, Matt Painter, Chris Holtmann, and Tom Crean qualify to be listed among the all-time greats in a state that is well known for its love and mastery of basketball.

But that day is not today.

This list – like all lists – is imperfect.  Qualifying for the list has no hard and fast rules, but being a head coach in this state at some point in a career is necessary.  Mike Krzyzewski was an assistant at Indiana for a season, but claiming him would be silly.

It’s borderline nutty to claim John Wooden, as his run at Indiana State last two years and predated his earliest success at UCLA by 15 years.  Rick Majors is in there for two reasons – he was a great coach, and I wanted Ball State to have some representation.

Argue with it, call me a moron, think of me as a genius – whatever.  This is my list, and I’m standing by it!

here are the top 11 basketball coaches in Indiana hoops history:

11 – Rick Majerus.  One of the best teachers of defensive basketball in history, Majerus coached Ball State for just two seasons, but qualified for the NCAA Tournament in his second year.  The year after, Dick Hunsaker took Majerus’ team to the Sweet Sixteen (a similar result occurred at Saint Louis the year after Majors left the program due to health issues and passed away).  A master of turning middling programs into winners, Majerus could be funny, dismissive, and cruel.  But he was a uniquely gifted basketball coach who left a mark in this state.  [ed. note: the original version of this story stated the Sweet Sixteen team at Ball State was coached by Majerus, which was inaccurate.]

10 – John Wooden.  Obviously, Wooden as a coach deserves to be ranked much higher than 10th on any list, but given his short tenure as the coach for South Bend Central High School and what is now Indiana State University, it’s not appropriate to rank him higher here.  Not only did Wooden win at Central and ISU, he told the postseason tournament that invited the Sycamores (assuming they were called the Sycamores in 1948) to get bent because they did not allow blacks to compete.  Wooden is one of the all-time greats, but his work in Indiana was too scant to acknowledge with a higher ranking here.  Eleven national championships at UCLA in 11 championship games counts in Cali..

9 – Digger Phelps.  Notre Dame qualified for its only Final Four under Phelps in 1978, but fans remember him best as the coach of the team that ended UCLA’s unparalleled 88-game winning streak.  Phelps was a master recruiter, bringing a string of All-Americans to a school where admission isn’t granted based only upon the ability to throw a leather ball through a hoop.  His work supporting various charities continues where Digger sees a need.  Leveraging famed for the common good counts here.  Coaching isn’t only about winning.

8 – Larry Bird.  Who knows where Larry Legend would rank if he had decided to stay beyond his third season as the head coach of the Indiana Pacers.  Bird’s winning percentage of .687 is the all-time best among Pacers coaches (second is Larry Brown at .579; third is Frank Vogel at .577), and he led the Pacers to their only trip to the NBA Finals – losing to the Lakers in 2000.  Bird had a strong roster and a great staff with Dick Harter and Rick Carlisle, but there is no questioning that Bird succeeded in following the first rule of coaching, “Don’t screw up a good thing.”

7 – Gene Keady.  Keady led the Purdue Boilermakers during a glorious run of 25 seasons of hard-nosed and relentlessly competitive basketball.  He was the coach during the last Big Ten championship threepeat, and virtually matched his rival to the south in wins during the 20 seasons they coached against one another.  He was named the Big Ten Coach of the Year seven times, and won six Big Ten crowns.  Under Keady, Purdue never made it to a Final Four, but that doesn’t diminish his legacy as a leader.

6 – Tony Hinkle.  You knew that Hinkle Fieldhouse was named after somebody, right?  That guy was Tony Hinkle, who was the human embodiment of Butler athletics where he was the football coach for more than 30 years, the basketball coach for more than 40 years, and the baseball coach for 40 years during three stretches.  He won more than 1,000 games combined in those three sports.  Hinkle’s longest lasting legacy is as the inventor of the orange basketball.  Balls were brown until Hinkle decided orange balls would be easier to see.

5 – Bob Leonard.  “Slick” led the Indiana Pacers to three ABA titles during his tenure with the Pacers, which included the first four seasons of its history as an NBA member.  Leonard hasn’t coached since 1980, but is still revered by the professional players he led as members of the Pacers most beloved and successful teams.  Without the success Leonard’s teams authored, the Pacers never would have achieved the popularity necessary to make the leap from the ABA to the NBA, and if he and his wife Nancy had not organized and hosted a telethon to sell season tickets, it’s likely the team would have been sold and moved – or simply folded.

3 – Piggy Lambert.  The inventor of the fast break, Lambert led Purdue to 11 Big Ten titles and a national championship in 1932 during his 29 years running the show in West Lafayette.  He is the coach who taught the game to John Wooden, who is considered by many to be the greatest college basketball coach of all-time.  Incredibly, Lambert also coached Purdue’s baseball team for 20 years.  He was also an integral figure in the merger that led to the formation of the NBA.

2 – Bob Knight.  Just as there is no way to ignore the self-indulgent and boorish behavior of the most polarizing figure in the history of Indiana sports, Knight’s run of excellence from 1971-1994 is startlingly consistent and amazing (from 1995-2000, not so much).  Three NCAA titles, 11 Big Ten Championships, and a long list of outstanding coaches and players who graduated during his era at Indiana make Knight’s greatness impossible to ignore.  He taught basketball as well as anyone who has ever coached the game.  Sure, he believed he was the emperor of Monroe County, but he was a virtually peerless coach.

1 – Brad Stevens.  I know.  Stevens spent only six seasons as the head coach for the Butler Bulldogs, but what a run it was.  Consecutive trips to the National Championship game were a wonderful validation of his acumen for strategy, teaching, and recruiting players who fit well together, but his long-lasting legacy is the unprecedented conference leaps the program took because of the Butler’s success.  Butler jumped from the Horizon League to the A-10 in 2012 and then to the Big East in 2013.  Now the coach of the Boston Celtics, Stevens continues to find a way to squeeze wins from a roster without stars.  And it doesn’t weigh into his ranking, but he is among the nicest and most considerate men I’ve ever met.