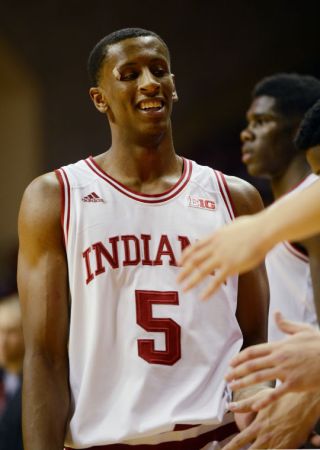 Troy Williams might wind up back in Bloomington for his senior season. That’s a no lose scenario!

The rules are different this year, so the number of college basketball players declaring for the NBA Draft has exploded.  Rightly so.

College players who don’t hire an agent have until May 25th (10 days after the NBA Draft Combine) to declare their intention to return to school.  This is a player friendly rule that allows a kid to participate in workouts to gain insight from NBA general managers and scouts without penalty to make an informed choice to stay or go.

If a player hires an agent, he forfeits his remaining eligibility and is committed to being available in the draft.

Yesterday, Indiana University’s Troy Williams declared his eligibility for the NBA Draft, but did not sign with an agent.

This was a procedural move for Williams that comes with no downside.  It still has some IU fans and media wondering whether this is a sign that regardless of his decision to stay in the draft or pull out, he is done playing basketball at Indiana.

Here are 10 reasons Troy Williams – and everyone else who declares for the draft – is making the right call:

10 – It only takes one team that loves you to make you rich.  If 29 teams think Williams should spend a couple of years in Europe to refine his game before playing in the NBA, and one believes Williams is ready, guess what, Williams’ dream of playing for millions will come true.  There is a lot to like about Williams, like elite level physicality, and maybe that’s enough for the right GM.

9 – This May might lay the groundwork for a successful next May.  Even if Williams goes through this process and comes out the other side returning to Bloomington, he is going to be better prepared to run the gauntlet at the NBA Draft Combine a second time.  Familiarity with the process will calm Williams, and that may provide a better ramp for hearing his name called on draft night.

8 – Betting on yourself is good for the soul.  Even if Williams has trouble stirring the kind of adulation in GMs necessary to rocket up at least one NBA team draft board, having confidence in yourself is key to success.  Nothing communicates that better than showing up ready to work.

7 – Chicago is beautiful in May.  Why not roll to the Windy City for a few days of hoops as Spring springs?  Chicago wakes up in May, and being there for a few days after finals end is a righteous way to celebrate the end of yet another semester.  [This assumes Williams is invited to the NBA Draft Combine.]

6 – After three years, a change in scenery is welcome.  Bloomington is a great town, and Assembly Hall and Cook Hall are two great places to work on your game, but the grind can get a little old.  Heading to Chicago and elsewhere to play against different guys and for different coaches will be a nice change of pace after hearing from the same coaches for what seems like forever.

5 – Williams seems to have plateaued.  Williams came to Indiana as a raw basketball player who turned the ball over too often and too carelessly, was out of position too often defensively, and lived for the Sportscenter worthy highlight.  Three years later, not much has changed.  He’s a better defender because he is stronger, but his understanding of the game seems to have remained static.  Maybe an opportunity to get out of Bloomington to workout for NBA bigwigs will provide Troy an epiphany in how to improve by eliminating the negative.

4 – Workouts against the best in college hoops can’t hurt.  One of the great aspects of the high school basketball experience is that summers are filled with tournaments against the best prep stars in the world.  It gives players a chance to gauge their games against those they hope to compete with and against in college.  The NBA Draft Combine is a similar experience.  Competing with the best exposes greatness and weakness.

3 – Input from NBA GMs, coaches, and scouts will be invaluable in developing his game.  Tom Crean has shown himself to be very adept at helping players build bodies that impress NBA scouts, but getting additional input from the key masters of the league in which Williams longs to play will give him plenty to work on during his final year at IU.

2 – Information is king.  By all accounts, Crean is very good about providing insight to Indiana players hopeful of playing in the NBA (which is all of them), but getting face time with NBA GMs and coaches is going to give Williams a much more accurate appraisal of where he will be drafted – or if he will be drafted.  His dream is to play in the NBA, and there is no better way to determine whether he is ready than to hear it from the horse’s mouth without any filter or emissary.

1 – There is no downside.  The worst that can happen is that Williams has some interesting experiences working out, learns a little more about basketball, and returns to IU for his senior season.  The best case scenario is that NBA scouts are enthralled by Williams’ length and athleticism and his stock surges.  Going through this process is playing with the house’s money in a game he cannot lose.  Williams is going to be a better player whether or not scouts love him.

Scouts to whom I have spoken believe Williams will return to Indiana, but minds can change, and Chicago may provide Williams a great opportunity to change them.