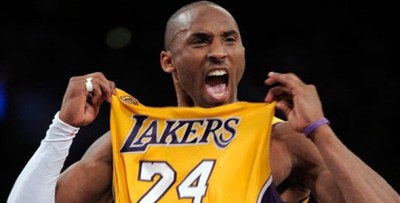 Kobe Bryant has always been willing to tell us who is responsible for the success of his Lakers teams.

Kobe Bryant will play the final game of his 20-year career with the Los Angeles Lakers tonight, and the media is climbing over one another to wax rhapsodic about the legacy of the self-proclaimed Black Mamba.

His career has been collage of great, good, bad, and hideous moments.  There were five championships and a single MVP award, but what defines Bryant more than anything else has been his ultra-myopic me-mirst arrogance that is best displayed in his income at the age of 37 – far past the end of his era as one of the best players in the NBA.

While the fawning continues on ESPN, let’s take a look at the top 10 lessons we can learn from the career of Kobe Bryant:

9 – All the branding in the world can’t put Kobe in front of Lakers greats.  While branding is the name of the game in 2016 America, when the Logo, Captain, Magic, the Stilt, the Diesel and George Mikan have played for the same franchise, the conversation isn’t about whether Kobe is an all-time top five NBA player, but whether he should be listed in the Lakers top five.

8 – Popularity doesn’t put bling on your finger.  Bryant might be one of the top five most disliked players in NBA history, but popularity doesn’t win championships.  Reggie Jackson was not well-liked with the Oakland A’s, Baltimore Orioles, New York Yankees, or California Angels when he played for them, but all those teams won.  There is nothing wrong with being a happy and affable guy, but championships are won as often by jerks.

7 – Self-dubbed nicknames are obnoxious.  The best nicknames come from others – Magic, Dr. J, the Round Mound of Rebound, Larry Legend, the Logo, the Sultan of Swat, Mr. Cub, the Say Hey Kid, Sweetness, and Juice are all perfect identifiers of great players and personalities,   In fact, the only nicknames should come from others.  Proclaiming himself “Black Mamba” was obnoxious.  Referring to himself as “Vino” because he got better with age was ridiculous.

6 – Surly works.  Teammates of Bryant talk about how insulated, aloof, and peevish he is.  There’s nothing inherently wrong with that.  We all know salespeople who are me-first types uninterested in making the sacrifices needed for team success.  There is no reason to be overly critical of people who put themselves ahead of the unit, but there is also no reason to hold a yearlong parade for their poster child either.  Being friendless wound up being worth $25-million a year from the Lakers and many tens of millions more in endorsements.  If your goal is amassing stacks of cash, surly is a solid behavioral choice.

5 – Branding trumps production.  Yes, Kobe won five championships, and is the third all-time leading scorer in NBA history.  His career should be celebrated as one of the best 25 in the history of the game, but this endless torrent of reflections during his farewell season have celebrated the brand at a level that stretches far beyond the reality of Bryant’s impact upon the league.  Brand yourself and win!

4 – Who needs teammates to get paid?  The Lakers have cobbled together a wretched supporting cast for Bryant the last three years – in large part because Bryant’s contract was so inflated that finding competence with the cash remaining was nearly impossible.  Given a choice between playing for peanuts with a talented group capable of winning, and cashing out at a max level while losing at a level the Lakers have never experienced, Kobe took the cash and hobbled through a season of pathetic basketball.

3 – Surviving a sexual assault charge requires patience.  In 2003, Bryant was charged with sexual assault after an encounter between Bryant and an employee of a hotel where he was staying.  Charges were dropped when the victim did not testify.  A civil suit was filed by the victim, and a settlement was agreed to which included an acknowledgement from Bryant that the victim did not perceive the sex as consensual.  I’ve heard nothing about the accusation or settlement during this final tour filled with defeat.  Time heals all wounds – with the media if not the victim.

1 – Selfishness rules.  How many stories have aired on ESPN celebrating San Antonio Spurs great Tim Duncan this season?  None I can recall.  Duncan has done nothing for the Spurs but do what’s necessary to win, including taking a severe financial haircut to allow the Spurs to remain a championship level team.  This season, Duncan is the sixth best paid player on the Spurs, and the 146th best paid player in the NBA at just over $5-million.  One of the best forwards in the history of the game is the 65th best paid forward this season.  Kobe?  He’s the highest paid player in the NBA at $25-million.  The return for the Lakers?  A 16-65 record.  The Spurs?  Maybe another championship if they can get past the Warriors in the Western Conference Finals.  You think Duncan will take a year long farewell tour when he retires?  No chance.