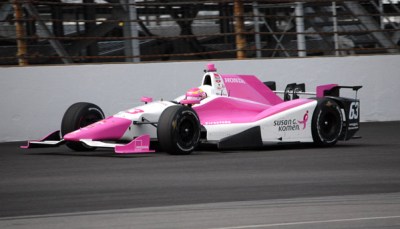 I found myself alone yesterday at the Indianapolis Motor Speedway in Jonathan Byrd Racing’s garage with four fully functional and (one would assume) fueled IndyCars.

The track was empty because of the rain that washed out practice, but by the time my radio show ended, the grounds were dry.  It occurred to me that I had a rare opportunity – to hop behind the wheel of one of the the finest engineered automobiles on the planet and tour the famed two-and-a-half mile oval where the 100th Running of the Indianapolis 500 will be contested in 11 days.

That irresponsible and criminal impulse faded quickly despite knowing that if caught, I would be the perpetrator of the coolest auto theft in the history of the world.

My rational decision came for 11 reasons – the immorality of violating the trust of our gracious hosts, which would be more than enough on its own, and the following 10 very pragmatic deterrents:

10 – No passengers/radio/tunes.  Not sure I could drive more than 30 feet without some companionship – whether it’s a person, talk show, or music.  Driving 200 mph with nothing to keep my mind occupied would be a terrible confluence of conditions that would corrupt my ability to operate the vehicle safely.

9 – Ultimate chick magnet in a chick-less venue is ridiculous.  To drive the hottest car on the planet in an absolutely empty Indianapolis Motor Speedway would be a silly waste of wheels.  Sure, driving insanely fast would be fun, but it would be nothing compared to having it valeted downtown in front of a parcel of vapid women who judge a man based upon his ride.

8 – Shifting is not done like a normal manual transmission car.  There are paddles on the steering wheel that allow the driver to shift gears, and I have no idea how the hell they work.  Blowing the tranny of a 1992 Honda Prelude is one thing; frying one in an IndyCar can’t be fixed or hidden by anything you can pick up at Pep Boys.

7 – Head is too big for a standard helmet.  A guy with a body like mine needs to take great care of his brain, and driving better than two-hunge with an unprotected cabeza is not the way I want to fry the little bandwidth I have remaining.  Sending my cavernous head’s dimensions to the Bell people so a custom helmet can be created seems a waste – given the scant chance I will be left alone a second time with my choice of four cars in an IMS garage that sits in entirely empty home of the Greatest Spectacle in Racing.

6 – Starting the car seems to be a two-man operation.  You don’t just grab the keys to an IndyCar to get it rolling.  A crew member needs to plug a dealie into the rear of the car to turn the engine (that I don’t know what the piece of equipment is called is a clue as to how unlikely it would be for me to find and use it properly).  If the car can’t be started, I can’t drive it.

5 – While I could certainly out run a cop, it wouldn’t be long until he saw me again.  The Indianapolis Motor Speedway is an oval – meaning it is a never-ending loop that would ensure my escape would lead almost instantly to my capture as I caught the policeman I had just eluded soon after.  This would be a futile, looped escapade unless I could find my way to 16th Street and then I-465, at which point it would become a one-man Cannonball Run until I ran out of gas.

4 – Pippa Mann’s car is pink.  My Dad had three rules – hold the door for a lady, always pay with cash, and never drive a pink car.  One of the cars with which I was locked in the garage is the pink Susan G. Komen Honda that belongs to Pippa and her car owner Dale Coyne.  Can’t defy my Dad in an idiotic and illegal pursuit of speed.

3 – Not entirely sure which peddle is the brake and which is the clutch.  I would imagine the sequence of pedals remains the same in an IndyCar from a typical car, but getting confirmation needs to precede climbing into the tub and firing the engine.  Trial by fire doesn’t need to be a literal description of my first effort behind the wheel of a car,  And while I doubt pressing the wrong pedal would cause it to burst into flames, I can’t be sure.

2 – Professional drivers are professionals for a reason.  Sure, we’ve all seen back-markers ride the brake around Indy, but the drivers today are really good.  Bryan Clauson told me yesterday that the window for error in hitting a turn correctly is right around six inches.  I can’t hit a turn perfect at 55 mph.  Doing it at 220 four times in a row during one lap would be well beyond my skill level as a recreational driver.

1 – I would likely poop myself at 115 mph.  There isn’t much point in hopping in an IndyCar if you aren’t going to go a little faster than 200 mph, and I have never topped 110.  That’s the threshold at which I feel uncomfortable in a car – and for good reason.  Traveling at twice the speed limit is not for the weak-kneed, and sadly I believe my digestive system would quickly and violently take corrective measures to ensure bodily safety if I ever drove a car faster than 110.