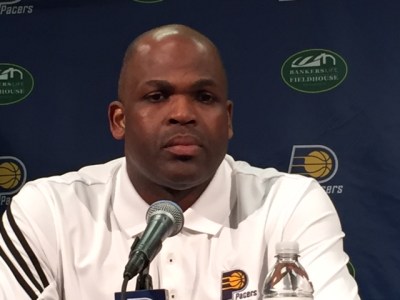 The reason I go to press conferences is to learn something I can’t when reading a transcript, and yesterday I learned something about Larry Bird’s decision to replace Frank Vogel with Nate McMillan.

Vogel is no longer the coach of the Pacers because in Bird’s opinion players were not held accountable for their behavior during practice.

I’m sure other messages were conveyed as I sat listening to Bird and McMillan talk about the move to hire a coach with middling success at Portland and Seattle in 12 seasons, but the word “accountability” was used often enough that it’s still echoing in my head almost 20 hours later.

McMillan is a likable, no-nonsense guy with a calm outward demeanor.  He’s not going to light up Bankers Life Fieldhouse with his charisma, but his job is to win basketball games, not charm a city.

There are plenty of reasons to like Nate McMillan a lot, if you take Bird, Pacers GM Kevin Pritchard, and McMillan at their word.  Here are 10:

10 – Says style of play will be determined by strength of roster.  Coaching stylists are prone to force a square peg into a round hole until a roster can be cobbled together to suit their preferred offensive and defensive schemes.  That takes time the Pacers are unwilling to waste in building a championship contender.  McMillan’s desire to scheme to the Pacers strengths means better results sooner.

9 – Players not climbing over one another to offer congrats.  There may be social media posts from current Pacers sucking up to McMillan, but I can’t find any.  That can mean a great many things, but I am choosing to infer that maybe they are unsure what exactly this move means for them.  Of course, it could be the Pacers all extolled McMillan’s virtues on Snapchat, an app I don’t use.  In which case, please skip to #8.

8 – McMillan is a coach, not a budding broadcaster.  Some coaches try to project a fascinating personality because working in media provides a nice paycheck without any headaches.  McMillan is a coach who wants to be a coach, and appears to be completely disinterested in working behind a mic.  Nothing wrong with coaches migrating into media, but McMillan will bring no such agenda to his position.  McMillan’s only interest appears to be doing the right thing – as he sees it.

7 – Rebutted notion he prefers slow-paced basketball.  McMillan’s last three Blazers teams ranked 30th in pace of play, and after hearing Bird extoll the virtues of getting up and down the court quickly, this seemed an odd marriage of team president and coach.  Not so much after listening to the reasons why McMillan chose to slow the game in Portland.  He went slow because of the strengths of his roster.  Brandon Roy was as good an iso guard as there was in the NBA, according to McMillan, so that is what the Blazers ran.

6 – McMillan never tried to end run for Vogel’s job.  McMillan said yesterday that he never talked basketball with Bird during his three years as a Vogel assistant because he never wanted to be perceived as a guy going after the head coaching gig.  McMillan told Vogel he would never go after his job, and according to Bird and McMillan he never did.

5 – Called Vogel immediately after accepting the position.  McMillan spoke often yesterday of doing the right thing, and calling Vogel to let him know he was taking the job was the right thing.  Vogel did the right thing by talking to McMillan for 45 minutes to an hour about the job and team.  We’ve known Vogel to be a great guy, and we are learning the same about McMillan.

4 – Familiarity breeds understanding, not contempt.  Being a three-year assistant working with this roster, McMillan knows exactly what each Pacer needs to succeed, and what holes need to be filled to achieve the goals of the franchise.  This might be bad news for players who felt like they could get over on Vogel, assuming they did – as was implied many times during yesterday’s media availability..

3 – McMillan played the game.  Being a former NBA player isn’t a prerequisite for succeeding as an NBA coach, but there is an understanding of how a player’s mind works that is an asset available only to a former player.  McMillan understands the mindset of the pampered player, and knows first hand the tactics that can be used to bring them together.

2 – Does “the right thing”.  Pritchard worked with McMillan at Portland for several years in addition to the past three with the Pacers, and he drilled into the media McMillan’s propensity for doing the right thing.  McMillan lives by a code, and he demands his players do the same.  The repetition of the message reinforced the notion that Vogel was a little lax in his demands for players despite always doing the right thing himself.

1 – Players accountable to same set of rules.  We don’t know that there were different rules for different players under Vogel, but that was the easy inference as we listened to Bird and Pritchard speak about how McMillan is devoted to holding players responsible every minute of every practice and game.  No one said that Vogel went along to get along, but it certainly seems in talking to Pacers front office folks privately that rules and culture were not applied equally to all.  McMillan’s voice gets even quieter and his eyes steely in discussing accountability – like he enjoys the challenge of ensuring equanimity in asserting a culture.

Does any of this mean more than 45 wins and a first round triumph next season?