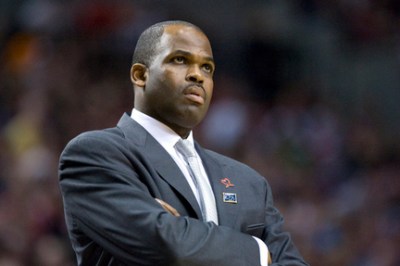 Nate McMillan is the new boss, and in many ways he appears to be the same as the old boss.

Meet the new boss – same as the old boss.

Nate McMillan will become the next head coach of the Indiana Pacers as soon as the mundane dickering over terms and the insertion of the ubiquitous force majure clause is inserted in the contract.

For a franchise that required change, according to team president Larry Bird – the promotion of an assistant coach, a member of Frank Vogel’s staff, seems an “stay the course” choice.

Bird said in the press conference announcing Vogel’s removal as coach, Bird reasserted his somewhat unique belief that players tune out a coach after three years.  McMillan has been an assistant on Vogel’s staff since 2013.  You do the math, and tell me how that makes a lot of sense.

There is no question that a voice from the head coach’s seat is different from that of an assistant, even if the voice belongs to the same guy.

This was undoubtedly the least intriguing of all the options available to Bird, a hire that packs no sizzle outside the McMillan household.  That doesn’t mean he can’t – or won’t – be a good coach.

McMillan might be the exact right guy for the job, but as far as being a creator of enthusiasm or as an explanation for the removal of Vogel, Bird tapping McMillan does not suffice.

Here are the eight reasons the McMillan hire is worth no more than a shrug:

8 – The known is less sexy than the known.  We’ve been around McMillan, interviewed him, seen what he does.  There will be no surprises with McMillan.  He might be incredibly successful, but as far as sizzle walking through the door, there will be very little as he takes the stage for his presser.

7 – Blazers pace of play.  McMillan’s last three teams ranked 30th out of 30 in pace of play.  From an offensive efficiency perspective, the Blazers were always at or above the NBA average, but Bird has spent a lot of time talking about pace over the past 12 months.  The guy who authored a historically prudent offense seems an odd choice to lead an uptempo attack.

5 – Name isn’t as cool as Ettore Messina.  If the lyrical quality of a name determined success or failure, Adam Levine would be an entry level tax attorney, but I’ve known a bunch of Nates, and no Ettores.  I’d like to know an Ettore.  That’s no reason to hire a coach (or tax attorney), but the truth cannot be argued.

4 – While offensive efficiency was good in Portland, defensive efficiency receded through his six years there.  Bird wants the Pacers to score more, but they also need to continue to play tough defense.  The game is played on both ends, and under Vogel, the Pacers defense was always better than the league average.

3 – McMillan has won only a single playoff series.  The Seattle Sonics won their first round series against Sacramento before losing in six games to the San Antonio Spurs, who went on the win the NBA Championship.  Other than that, McMillan coached teams never won more than two games in any postseason (one fewer than the postseason that just got Vogel kicked out the door).

2 – McMillan’s postseason record of 14-20.  Frank Vogel was fired with a 31-30 postseason record in 5+ seasons.  The Pacers team was obviously different from the Sonics and Blazers teams McMillan led, so the comparison isn’t apples to apples, but McMillan had multiple opportunities to succeed and for whatever reasons failed.

1 – Can meaningful change come from within?  A new voice coming from a familiar coach doesn’t make a lot of sense without realizing that a similar change was made in Chicago just prior to their championship runs when Phil Jackson was elevated over the top of Doug Collins.  The difference is that if McMillan was another Jackson, we would have seen it when he was in Seattle or Portland.