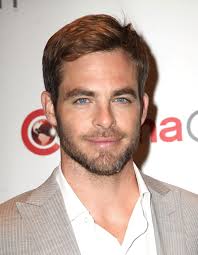 Chris Pine is a great looking guy, but does he really qualify to drop the green flag for the 100th running of the Indianapolis 500?

“Who is Chris Pine?” I was asked by a long time Indianapolis sports media type in an actual conversation earlier today.

“Is he a country music guy?”

“Let me google him…  Nope, he played Captain Kirk in the Star Trek reboot”

The conversation you had when you heard Chris Pine was going to be front and center during the ceremony to begin one of the biggest events in the history of racing might have been different by a word or phrase, but the tone was the same – somewhere near the intersection of Blah Boulevard and Astonishment Avenue.

Given the historic importance of the 100th running of the Greatest Spectacle in Racing, and the understanding that while we love the Indy 500 here, it barely registers on America’s cultural radar, here is a list of 10 celebrities who would be a much better choice to participate as the honorary starter of the race:

10 – A descendant of Ray Harroun.  Harmon won the first Indy 500 in 1911 as the pilot of the Marmon Wasp, and never attempted to run in another Indy 500.  Obviously, the Indy 500 in 1911 was something quite different from what we know it to be today, but Harroun’s family continues to visit the place where he became a legend decades after his only start and win.

9 – Bobby and Al Unser together.  The brothers combined to win seven Indianapolis 500s, and lost brother Jerry in a wreck during practice for the 1959 race.  Both continue to come to Indy.  In fact, Bobby was in the media room yesterday.

8 – David Letterman.  I know the Broad Ripple High School and Ball State University graduate is a car owner, but I don’t care.  He loves Indy, and he’s a good guy.  He may be fading from the public consciousness, but at least there are serious ties between Letterman and Indianapolis.

7 – John Mellencamp.  Hell, why not?  I don’t know whether the former Johnny Cougar has ever been here, but he’d make significantly more sense than Chris Pine, an actor with nothing to evoke a tether to Indiana whatsoever.

6 – Mario Andretti brought cool to Indy for more than a generation, and he is still a walking monument synonymous with the world’s greatest race course.  We remember the win in 1969 and the incredible flip during a testing lap in 2003.  He was the quiet and cool yin to A.J. Foyt’s loud and brash yang when the Indy 500 was appointment viewing across America.

5 – Jim Nabors.  Hey, if the former Gomer Pyle can’t sing “(Back home again in) Indiana” anymore, why not fly his ass up here from Hawaii one more time to do something else.  The affection Hoosiers feel for the former sitcom star with no ties to Indiana other than the 40+ times he sang the state anthem prior to the race is more than a little odd, but it’s beyond argument that he is beloved here.

4 – Roger Penske is really busy on race day and would likely decline, but without Penske where would Indy be?

3 – Tony George.  Whether George saved the Speedway or nearly destroyed it by launching what is now the IndyCar Series will be debated forever, but there is no doubt he poured family resources into the Indianapolis Motor Speedway at a rate that made his family nervous enough to remove him as the head of the place and series.  Someone ought to pay homage to George for always having the best interest of open wheel racing and its fans top of mind.  Why not by waving the green flag?

2 – Carl Fisher’s nearest relative.  Fisher had one child who died early in life, so there are no direct descendants, but somehow or another the significance of the dreamer who designed and paid to build the Indianapolis Motor Speedway deserves some level of recognition on race day.  Four-hundred-thousand fans and 33 drivers will validate his vision for the 100th time in a little more than a week.  Putting someone that represents Fisher’s memory in the spotlight is the least the current stewards of the track Carl built can do.

1 – AJ Foyt.  Who is more Indy than Foyt?  He won the 500 four times, and has done more to extoll and enhance the virtues of the Indianapolis Motor Speedway than anyone since Tony Hulman or Wilbur Shaw.  Tex isn’t going to be around forever, and while there is no reason to hold a wake for him, putting him front and center prior to the race is an appropriate honor.

This list is hardly exhaustive.  I could rattle on 5,000 more names – including many friends and family members – before I ever began to think about Chris Pine as a candidate to wave the green flag.