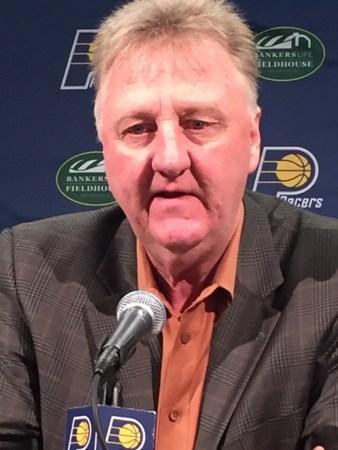 Larry Bird is going to try to find the next big piece of a Pacers championship roster in 20 days.

In 20 days, Indiana Pacers president Larry Bird will have another opportunity to look like a genius or a lunkhead.

The Pacers, based upon years of scouting, private workouts, and intense interviews will cast their lot with a young man who will either prove them astute or silly with his talent and behavior.

Stretch four and prototypical point guard are the Pacers glaring needs.  They might indulge there – or they could draft the best player available regardless of position.

Salary caps will explode all over the NBA this offseason, so the Pacers need to figure out whether the immediate improvement they sought by replacing Frank Vogel with Nate McMillan will come from a free agent or a player selected in the draft.

Maybe they grab a couple of free agents and draft a project with the 20th overall pick.

There are so many possibilities, fans can’t wait for selection #20 just 20 nights from today.

Here are the 10 reasons Pacers fans should be counting the days to June 23rd:

10 – When the Pacers pass on Tyler Ulis, it will keep UK fans from road-tripping to Indy.  No fanbase base packs a healthier dose of annoyance than Big Blue Nation, and Indy is just close enough that members of that bizarre fraternity might decide to make the two-hour drive to see Ulis play against John Wall, Eric Bledsoe, Nerlens Noel, or some other former Wildcat who did a short stretch in Lexington waiting for NBA Draft eligibility.

9 – Teams picking ahead of the Pacers are going to screw up.  GMs of lottery teams are going to try to uncover a gem that might carry them to relevance and a contract extension (except in Boston where relevance and extension for Danny Ainge and Brad Stevens have already come), and several good players who might develop into championship level components will be pushed out of the lottery where the Pacers will have access to them.

8 – Thon Maker is a win/win if he is picked.  For those who love Bird, Maker represents a chance for Bird to steal a player with all-star upside to form a young and talented front line with Myles Turner and Paul George.  For those unsure whether Bird is as smart an executive as owner Herb Simon believes, Maker is also a potential bust who might make the Tyler Hansbrough selection in 2009 look prescient.

7 – What the hell else is there for us to think about?  Indy is a great sports town from late August to the Indy 500 or the end of Pacers season – whichever comes first.  Outside that window, it’s all about drafts, minicamps, and minor league baseball.

6 – Pacers appeared to get smart last year.  Grabbing the under-appreciated Myles Turner was a stroke of genius that will benefit the Pacers for the next decade, and Joe Young is an engaging hard-working player who can score the ball at an elite level.  While genius seems to visits the Blue and Gold only every five years (2005 – Danny Granger; 2010 – Paul George; 2015 – Turner), this draft appears filled with talent enough to help coach Nate McMillan succeed in year one.

5 – Another chance to talk to Bird.  I find Bird to be engaging and quite funny.  Sitting in the media room as he answers dozens of questions about his team is usually a very good time.  There aren’t that many people who can make me laugh hard.  Bird is one of them.

4 – Anything can happen.  The Pacers are notorious for not leaking their intent.  In fact, Bird has said there are drafts where he’s not sure who the Pacers will take until the name pops from his mouth during the call to announce the pick.  The Pacers could trade up or back, or stand pat, and mock drafts almost never get the Pacers pick right.

3 – There is depth at both positions of need.  If the Pacers are looking for a power forward and true point guard, there will be a bunch available when the Pacers select 20th.  Brice Johnson (North Carolina), Ben Bentil (Providence) and Damian Jones (Vanderbilt) should be available at the four while Demetrius Jackson (Notre Dame) and Ulis could be available when Larry makes the call.

2 – This is a freaky deep draft.  There is not much separation between the 10th best player in the draft and the 40th.  Some drafts have shelves of players beneath which the talent level plummets.  This is not one of them.  There is even a reasonable chance the Pacers can get a player worth gambling on with the 50th pick.

1 – Much more likely to draft a star than sign one in free agency.  It makes no sense to me that athletes would prefer to live in Miami, New York, or Chicago than Indy, but NBA free agents make decisions based upon criteria I may not fully appreciate.  Regardless of the logic, Indy seems to be one of those cities that are not top of mind for star players.  That leaves the draft as a conduit for excellence.  If the Pacers are destined to win a championship, it will be with a roster of stars build through the draft – and this draft is a key in that effort.