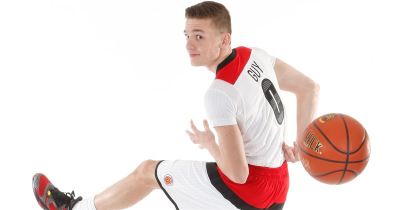 Mr. Basketball Kyle Guy will represent Indiana against Kentucky as a high school basketball player prior to heading to the University of Virginia.

A group of Indiana high school players representing its state and their high schools as the final act of a long pre-college basketball career is a cool tradition.

Being forced to play against a ragtag bunch of all-stars from Kentucky as the last test in that process is unfairly dreary.  The 22-point win the Indiana seniors posted last night against the Indiana Juniors will likely be more competitive than either of the two games against Kentucky.

For decades, Indiana has played Kentucky in what used to be a fun test of hoops skills by kids from two states where basketball was king.  Then, Indiana players improved in ways Kentucky could not match, so the series devolved into an embarrassing mismatch that needs to be retooled or the Indiana All-Stars may be rewarded for its superiority with a permanent pink slip.

There are ways to save this important tradition for the generations of Indiana All-Stars to come, but the first step must be the pursuit of a new and improved opponent.  Just as the University of Kentucky refused to play Indiana again after Christian Watford’s buzzer-beater beat the Wildcats in 2011, the time has come for Indiana to stop looking to the south for its annual all-star series opponent.

Here are the 10 reasons why Indiana needs to look away from Kentucky:

10 – Being slaughtered as their last act as a high school athlete is a sad end for Kentuckians.  It’s unfair to continue to ask Kentuckians to accept their annual fate as lambs led to slaughter at the hands of Indiana kids in front of embarrassingly small crowds.

9 – Would be more fun for Indiana to host a round robin.  Maybe the answer isn’t to play a home and home against one state, but a four-way party for Indiana, Ohio, Michigan, and Illinois.  Those four states launch college players all over the country.  What a great finale to a high school career that event would be – hosted, of course, at Bankers Life Fieldhouse, the world’s greatest basketball arena.

8 – The Indiana junior all-star squad is a superior opponent.  Back in the day, the junior all-stars provided a tune up opportunity for the seniors prior to the two-game series against our neighbors to the south.  Now, these games between the juniors and seniors from Indiana are more competitive and the games against Kentucky are an afterthought.

7 – If the series had a mercy rule, Kentucky would have abandoned ship a decade ago.  Indiana has swept Kentucky seven years in a row, won 31 of the last 34 games and leads the 75-year-old series 92-42.  Attendance requires hope, and there is very little of that south of the Ohio River when Kentucky plays Indiana.

6 – According to Kentuckians, the all-star program is not well-funded.  The Kentucky team doesn’t have the resources to house and feed the Kentucky team for the week of practice required to be even mildly competitive.  In an essay at khsaa.org calling for Kentucky to leave the series, former all-star coach Allen Feldhaus Jr. says, “When some kids don’t even show up (to practice), when nobody’s coming to games, when you don’t have money to house and feed (the players) well, it comes to the point where you need to do away with it.”

5 – Illinois and Ohio high school hoops talent is superior.  There are occasional outliers, but for the most part Kentucky does not produce high quality talent.  Ohio and Illinois stock multiple programs with all-conference and all-American talent on an annual basis.  If Indiana played against a team from Chicago, it would be a series of very talented players who would provide a fascinating contrast in styles.

4 – Game in Kentucky to be held at Bellarmine University will be an upgrade.  Knights Hall at Bellarmine seats 2,196 people.  That’s a significant drop from an average size high school gym in Indiana, and an embarrassment to the series.  if the interest level in Kentucky has deteriorated to where barely two-thousand people from the Blue Grass State care to watch their state’s best, the time has come for Indiana to move on to a new opponent.

3 – Transylvania University nearly owed attendance last year.  The truth was even uglier last year than it will be at Bellarmine as 834 people watched the game Kentucky hosted at the Beck Center on the campus of ol’ Transylvania U, and some of those had to be friends and family from of the members of Indiana’s team.  What better school to suck the life out of a game than Transylvania?

2 – If the opponent doesn’t change, the series may end.  The Indiana All-Star team is a great tradition, and the chance for the best players in the state to come together after a lifetime of playing against one another is too sweet a cherry on top of an outstanding career to not save by dumping the underfunded and under-talented Kentucky squad.

1 – Kentucky high school basketball is too far beneath Indiana to compel interest.  For a variety of reasons – population, training facilities, financial health, organization, and tradition among them – Indiana high school hoops has lapped many times what passes for basketball in Kentucky.  In Kentucky, no one cares about the series because being annihilated annually by Indiana is embarrassing.  In Indiana, few care because relentlessly beating the hell out of a lesser opponent has reduced the drama to near zero.