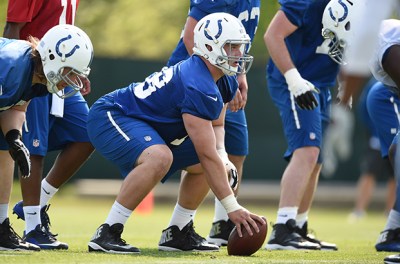 Minicamp ended today for the Colts, but for the smart players, the work never stops.

These are the times that try coaches souls.

Chuck Pagano said goodbye to his team today for a period that will end in late July when his roster reconvenes at Anderson University for training camp.

Each player left the Colts Complex with a binder and iPad containing a day-by-day schedule of workouts, diet, and study that Pagano trusts will keep his team on the straight and narrow – ready for a healthy and productive camp and five preseason games – three more than necessary, but that’s a belief best left for another list.

The option of continuing a self-disciplined regimen of toil as a professional or a few weeks of sloth and late nights is a great sifter for the NFL.  Some behave like men determined to maximize their value, and others buy the hype that they are indestructible and able to burn the candle at all eight ends without suffering consequences.

10 – “Clear eyes, full hearts can’t lose!”  If Coach Eric Taylor said it on Friday Night Lights, it must be true.  Keeping your eyes clear requires a lifestyle that a couple of drops of Visine can’t correct.  Super bowls aren’t won at the moment of a great throw, catch, or tackle.  They are won – and lost – because of the tenacity during every drill at practice or rep in the weight room prior to that moment of victory – or defeat.

9 – You are what you eat.  You want to eat a deep dish pizza every night?  You can, and the result will be the same for you as a for an NFL player.  Nonproductive weight gain and a congested cardiac region will make an NFL player as sluggish as you would be.  Put good stuff in your body, feel good, and live with great energy.  Bad stuff does exactly the opposite.

8 – Nothing good happens after midnight.  My Dad told me this a million times, and I didn’t start believing him until I was 30.  NFL players don’t have the luxury of waiting until they turn 30 to start acting like adults.  96% of professional football careers end before players turn 30.  When Aqib Talib was shot earlier this week, my first question was, “What time was it?”  of course, it was after three in the morning.  It’s always after midnight when the bad stuff happens in bars/clubs.

7 – Big Brother is watching.  If NFL players believe that owners and management just allow players to ride off into the danger zones of their own self-indulgence each Summer, you are crazy.  You can bet there is a reasonable amount of monitoring that goes on between now and camp.  As deeply as front offices dig into the lives of potential draftees, you think the information gathering stops when a player is selected and trusted with hundreds of thousands of the owners’ dollars?  Not a chance.

6 – “A” students are “A” students for a reason.  My son is going to take the bar exam at the same time the Colts report to camp.  He is studying for the exam at least eight hours every day and has been for a month.  I ask him every day – in jest – “What the hell are you doing?  The test is weeks away!”  The people who pass the test work hard in preparation.  Those who fail shuffle until the night before and try to cram.  The NFL is similar.  Those who work, earn.  Those who indulge and cram, retire early.

5 – There is a car service available.  The NFL got smart a long time ago and stuck deals with car services that players can use gratis if they have any doubt of their sobriety.  All a player has to do is call to get a lift home, and players continue to rack up DUI arrests.  It makes no sense.  Make the call, save the attorney fees, humiliation, loss of gig, and potential harm done to others as a result.

4 – “If you have to tell people who you are, you aren’t.”  That’s a great quote from Gregory Peck who was waiting for a table at a restaurant with friends who asked him to assert his fame to speed the seating process.  If you need to tell people – or a cop – you are a Colt, it’s not meaningful to them.  Fringe players should never play the “I’m a Colt” card because they won’t be for long.

3 – The next seven weeks make the difference because no one is watching.  Everyone works hard when the boss is looking.  if you work hard when he or she isn’t, you will take leaps ahead of those who don’t.  The period between minicamp and training camp is where careers are made or broken because it is when losers reveal themselves.

2 – Listen to your elders.  Mike Adams and Robert Mathis are both 35 years old, so asking them how they have managed to stay in the NFL and replicating their habits is a very suitable substitute for those not clever enough to devise their own regimen.  When I was in college, I did everything a guy named Joe Amicucci did.  My grades were never better.  Imitating smart people is a great way to achieve as they do.

1 – Don’t be THE idiot.  If you are at a bar or party and as you look around you see no one drunker or dumber, leave immediately because you are both to everyone else.  The squeaky wheel gets the grease, and the idiot gets arrested.