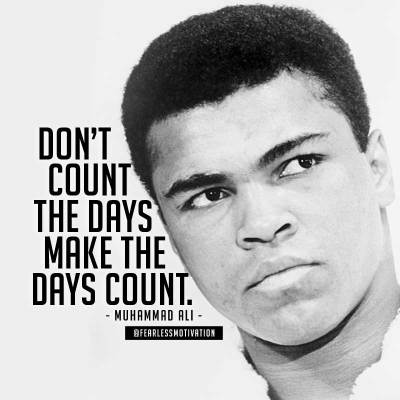 Muhammad Ali’s impact is best captured not in his jabs and right crosses, but in his many lessons.

Muhammad Ali is being laid to rest today, and everyone in the world is either privately or publicly eulogizing him.

It’s impossible to get any remembrance of Ali exactly right because he was too grand a figure – both as an athlete and cultural leader to capture in mere words.

My thoughts of Ali this week center on the lessons I have learned through Ali’s unconquerable spirit, lightning fast left jab, ability to take a punch (both literally and figuratively), and decision to voice his disdain for illogic.

Here are my favorite 10 lessons taught by Ali:

10 – Life’s about where you finish, not where you start.  Muhammad Ali grew up on the west end of Louisville and became the most famous person in the world.  He showed thousands in Louisville that the road from the west end to massive fame is hard to find, but not impossible.

9 – If you say it out loud, it can happen.  From the time he was a boy, Muhammad Ali proclaimed himself as the future heavyweight champion of the world.  It came to pass.  if you are afraid to say it, you may be afraid to make it happen.

8 – Marketing plus talent builds interest.  There was no one better at building interest in a fight than Ali.  He understood interest is driven by conflict, and he was eager to frame a fight as a battle of good versus evil.  Fans require an affinity driven by beliefs, geography, or generational loyalty to consume an event.  Ali understood how to access and monetize the passion that burns in most fans.

7 – Pride matters.  There were many reasons for a young black man in Louisville in the 1950s to feel somehow less important or privileged than whites.  Ali never understood why race defined a person, and so for him it did not.  He didn’t play the white man’s game – didn’t cow-tow to the power structure.  He lived life with pride on his terms – on his God’s terms – by taking pride in who he was..

6 – Voicing beliefs is our mandate.  If you believe it, say it.  There might be consequences, but it is always the right thing to do.  Because Ali questioned America’s involvement in the Vietnam War, many questioned it.  Because Ali attempted to live outside the restrictions of racism, racism as a construct and belief was questioned and ultimately discarded.  He lost three years of his career, was vilified, and had his life threatened innumerable times.  But his life changed ours because he used his fame to say what he believed.

5 – Adversity can be a springboard.  When Ali was 12, his new red bike was stolen.  He vowed to fight the thief.  A louisville cop named Joe Martin taught him to fight, and Ali the person became Ali the fighter.  If he responded to his bike being stolen with a shrug or by buying a gun, his life winds down a very different road.

4 – Life is about learning.  The evolution of Ali’s beliefs went through many stages, including his own angry racism as espoused by Nation of Islam leader Elijah Muhammad.  He failed the first three times he married.  In the end, he loved all and remained married to his fourth wife for more than 30 years.  Intellect becomes wisdom through experience.

3 – Kindness is king.  Ali had a magic trick, smile, and hug for everyone.

2 – Being special is determined by the effect we have upon others, not great talent.  Ali hasn’t won a championship fight in nearly 40 years, but he is viewed by millions of those under 30 as the author of a special life.  His boxing skills provided a forum for him to touch others, and that is what has led to our virtual worship of his legacy.

1 – Live with love.  If you send love toward people, you will get love back from many of them.  If you project anger, you will get that back.  Life is just too short to not embrace one another at every opportunity.  Ali loved, and so he was loved.