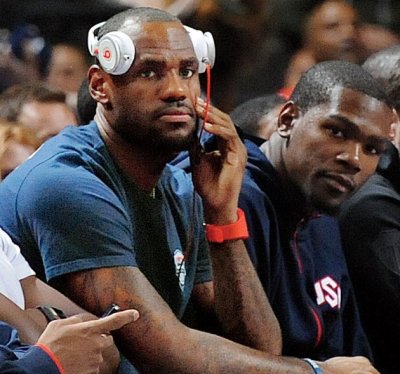 Wearing headphones without them covering your ears is odd, but it’s no reason to dislike LeBron James.

LeBron James will either win the next three games against the Golden State Warriors, or he will fall to 2-5 in his seven NBA Finals.

Regardless, there will be those who love what he represents, and others who do not.  Count me as one of those who doesn’t.

There is no question LeBron is THE player of his era in the NBA, but there is also no questioning his lack of charisma.

He is a great player, endorsement shill, and will make more money as a business owner than player, but that doesn’t make him likable.

Here are the 10 reasons I don’t like LeBron James:

10 – He’s a tank among gazelles.  Popular players of the past were graceful athletes who thrilled fans with their fluidity and explosiveness.  Michael Jordan, Julius Erving, Dominique Wilkins, and others elevated, finished, and smiled.  Magic Johnson, Isiah Thomas, and Larry Bird competed, waved towels, and grinned through years of excellence.  LeBron is more like Ivan Drago in Rocky IV.  There is no question he is the best player of his era, but he seems not to enjoy it.

9 – LeBron’s pre-game speeches are horribly weak.  You have to hand it to LeBron for trying to assert himself as a vocal leader, but the results are wanting.  The worst was the speech he gave prior to the home opener in 2014 as he returned to Cleveland, “Don’t take this moment for granted. This is going to be one of the — this is one of the biggest sporting spectacles in the history of sports. And we’re a part of it. And it has a lot to do with me. I understand that. But I wouldn’t won’t to do it with no other guys besides ya’ll.”  Good grief.

8 – Telling Dr. Dre he’s have to call him back in the Beats commercial.  I know this was a fictitious spot where Dre calls LeBron as he works out.  LeBron takes the call, but then informs Dre that he’ll have to get back to him.  LeBron was working out alone, and could easily have answered Dre’s question before returning to work, but he big-timed him.  Why LeBron thought this was a positive way to portray himself is the real question.

7 – Claimed yesterday that he has taken the high road for 13 years.  James is never a petulant tool with the media, but the high road cannot be claimed by the person who rides it.

6 – Got his coach fired.  This isn’t horrific in and of itself, but David Blatt was doing a respectable job as the Cavs leader.  In year one, the Cavs went to the NBA Finals, and their record in year two was 30-11 – hardly a mess requiring the dismissal of a coach.  The replacement was Tyronn Lue, whose record for the remainder of the season was 27-14.  The fault for the Cavs underperforming had nothing to do with Blatt, but there always seems to be a fall guy when a James team fails.

5 – His rider for high school games.  LeBron was a big draw as a high school player, so his St. Vincent-St. Mary High School team was often booked into games at larger arenas in Ohio.  The rider for the games was filled with demands by LeBron’s family that rivaled those of a rock band.  He and his have lived immersed in an environment of entitlement for a long time, and it started long before his entry into the NBA.

4 – Stepped over Draymond Green.  This was a punk move that prompted Draymond Green to shove James, causing a flagrant foul to be assessed.  I’m all for baiting a hothead into overreacting, but stepping over a guy in the way James did was akin to a fifth grader thwacking the ear of a second grader.  No principal in the world would suspend a second grader for swinging on a punk fifth grader, but the NBA decided to pull the trigger on Green.

3 – He is a physical beast in ways unlike any player since Chamberlain.  Rooting for a 325-pound high school defensive tackle to blow past a 190 pound center or guard to get to a 175 pound quarterback is a close comp to LeBron going up against most players in the NBA.  LeBron is physically gifted at a level I thought impossible in this era of supplements, training, and diet.

2 – The endless whining.  Has there ever been a player in any sport that whines, bitches, and carps about calls with the regularity of LeBron James?  Not in my memory.  Every call against him is worthy of appeal, and any time there is even minor contact as he goes to the rim there is another lengthy, palms-up dissertation on what constitutes a foul.  LeBron is like a rich teen who argues about parking tickets.

1 – LeBron believes he is entitled to winning championships.  Based upon the ceremony announcing his arrival in Miami and every other media availability he participates in, LeBron embraces the notion that he is gifted enough to take virtually any roster to a championship.  If the Cavaliers lose any of the next three games, LeBron teams will be 2-5 in his seven attempts to win an NBA Finals series.  LeBron may believe he is “The King”, but he has proven himself again and again to be “The Prince”.