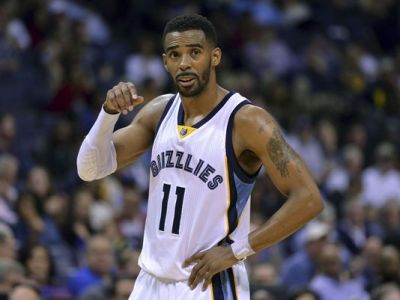 If Mike Conley wanted to come back home, I’m sure Larry Bird would find the roster spot and cash needed to make it happen.

This is an offseason where the Pacers will show their hand as a team that believes it can contend in the East, or one committed to building a roster that might a championship in three years.

Pacers president Larry Bird appears to believe that now is the time, or why would he replace the longest tenured coach in the franchise’s NBA era with Nate McMillan?

This draft is a weird one filled with intriguing choices.  There are young players who are long term projects, and others with lower ceilings ready to contribute now that will be available when the Pacers draft 20th overall.

Free agency also provides the Pacers a chance to upgrade at the two spots where they appear to be weakest – point guard and power forward – and they will have a lot of cap room to spend.

Here are the top 10 players who might help the Pacers reach that ultimate goal of winning the championship that has eluded them for each of their 40 NBA seasons of existence:

10 – Tyler Ulis – Short, light, and fast, Ulis will bring a unique level of speed and quickness to the team that drafts him.  His 149-pound frame will make for interesting matchup challenges, but he might be able to make up for it by being a relentless and clever pest.

9 – Jeff Teague – Teague has a year left on his deal with the Atlanta Hawks, but is a likely trade victim because of the development of Dennis Schroder as the Hawks point guard of the future.  Teague would likely not be discussed by Pacers fans and media fans as a solution at point if not for his status as an Indianapolis native.  Teague is a good player that has never shown an ability to lead a team to postseason wins, but I’ve underestimated him from the time he was a fourth grader, so who knows?

8 – Demetrius Jackson – I debated whether to slot Jackson or Domantas Sabonis of Gonzaga here, but I can’t see Sabonis being available at #20.  Jackson is a fast point guard who can score, and seems a solid choice as replacement for George Hill should he decide to leave as a free agent after this season, or if he is traded as the deadline approaches.

7 – Brice Johnson – I love Johnson as an option for the Pacers.  Throughout his four years at North Carolina, Johnson improved and became an outstanding four – especially on the defensive end.  Despite turning 22 just four days after the draft, Johnson is still a project as a stretch four.  Johnson attempted exactly zero three-pointers during his era at UNC, but he is an elite athlete with good size who scored and rebounded exceptionally well last season during his senior year that earned him first team All-America status.

6 – Kevin Durant – Let’s be honest, there is no chance Durant pledges Pacers.  If he wants a small market option with a roster ready to contend, he’s already there in Oklahoma City.  Durant is a native of the Washington DC area, he might find Los Angeles to his liking, or understands and appreciates his role as the most popular basketball player to likely ever live in the state of Oklahoma.  He could wind up in any of those places, or somewhere else, but the Pacers are an enormous longshot.  He’s on the list because he would make the Pacers the favorites in the East and he’s a free agent.

5 – Furkan Korkmaz – Sure, it would be fun to hear Pacers radio voice Mark Boyle say, “Korkmaz for three! There is only one Furkan Korkmaz!”, but that’s not a reason for Bird to pull the trigger on the 18-year old Turkish guard.  The possibility for annoyingly amusing “What a Furkan Korkmaz!” tweets is a reason to look elsewhere.  Sadly, his name is the only reason to get excited about a project who might take three years to develop and is a likely draft and stash in Europe candidate.

4 – Thon Maker.  This is the kind of kid who gets general managers fired – or promoted.  Maker has the potential to be an all-star or a total bust.  Because he never played in college, so no one has seen whether he can compete successfully against players his size and ability.  He is an honest seven-footer with length and great shooting range.  It’s likely that Maker is two years from scratching the surface of his best self in an an NBA uniform, which means that the Pacers are likely to pass for a more immediately productive option as Paul George enters his prime.

3 – Denzel Valentine – Hoosiers tend to love Big Ten players because we have seen them throughout their college career.  Valentine seems more likely to be a good player for a good team, rather than a key component for a championship team, but the Pacers could certainly benefit from Valentine’s two-way game and maturity.  Unlike many of the tantalizing players with great upside who might be available as the Pacers select 20th, Valentine is a known quantity who can help now – especially in the absence of free agent Solomon Hill.

2 – Ty Lawson – Poor choices and a bad fit in Houston brought Lawson to the Pacers on March 7th last season.  There were flashes of the game that made him a nightmare for defenses during his last four seasons in Denver.  He is fast, and if the Pacers want to play fast, there are few better offensive point guards in the NBA to do it than Lawson.  Plus, he will be cheap.

1 – Mike Conley – It’s unlikely that in a pique of sentimentality Conley will choose to return to the city where he went to high school – not when there will be so many options for one of the best defensive point guards in the game.  But maybe he will see that the Pacers are a true point guard away for being a threat to win the Eastern Conference as LeBron James ages.  Conley is a winning player in his prime who would fill a huge hole for the Pacers.