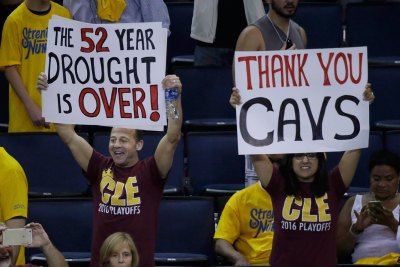 Cleveland finally won something yesterday, and it was about time.

There is something magical about watching adults experience the level of extreme joy normally reserved for children.

It usually happens only in sports, and usually after the end of a severe drought of success.  Few cities have ever experienced a lack of championships that stretched more than 50 years.

Despite having franchises in three major leagues, Cleveland’s had not known what a celebration felt like since 1964.  Not only had Cavaliers superstar LeBron James not been alive when Jim Brown led the Browns to their last title, his mom Gloria was born over three years after that game.

Through unending losing, choking, and misery Northeast Ohio’s sports fans had been made to believe they might never see another championship, and that seemed especially true after falling behind Golden State 3-1 in the NBA Finals.

Cavs fans kept the faith that the Cavs would be the first team in NBA history to win a title after losing three of the first four games in the NBA Finals.

That faith was rewarded, and now the Mistake by the Lake is again a city on top of the world – as well as Ohio.

Here are seven reasons to be very happy for a city that has suffered long enough:

7 – With LeBron turning 32 in six months, the window is closing.  Opportunities for LeBron to assert his will while sitting only one minute during a game seven are ending.  He’s been lugging around 265 pounds for a long, long time.  Not only has LeBron played 13 NBA seasons, he’s played another 2 1/2 seasons worth of games in the playoffs.  Add 12 all-star appearances and three Olympics, and the tread left on his tires is getting thin.  If not last night, then when?

6 – Now known as something other than the “Mistake by the lake”.  The national image of Cleveland has not been filled with positives.  The Cuyahoga River burning was a miserable characterization of a city filled with proud people.  Now, we see Cleveland through a different lens.  Such is the power of sports.

5 – They lost LeBron before he found his way home.  Generational players rarely leave their original franchise.  Larry Bird, Magic Johnson, Michael Jordan (forget about the Washington Wizards version of Michael), John Stockton, Jerry West, Kobe Bryant, and Bill Russell all stayed put.  Kareem Abdul-Jabbar and Wilt Chamberlain were both traded.  LeBron walked out the door in the most agonizing fashion imaginable, which made last night all the better for Clevelanders.

4 – Celebration was mostly safe and fun.  Some cities burn after a championship.  Some are filled with looting by opportunists who use the frenzy to feed their greed.  In Cleveland last night, a police car was damaged, someone was shot in the ankle, and a window was broken at Flannery’s – a downtown bar.  Fifty-two years of frustration exploded in almost entirely harmless joyful fun.

3 – Cleveland forgave and forgot that LeBron packed for South Beach.  When LeBron made the call to leave his native northeast Ohio for South Beach, bonfires of jerseys were all over the news.  When the prodigal SOB decided to return, the burned jerseys were replaced by new ones.  The passion that dimmed for the Cavs as they predictably receded to mediocrity minus their leader was reborn as he returned.  Cavs fans could have remained petulant, but they chose to enjoy the return and circus that has followed.

2 – No sports city in America has been tortured more than Cleveland.  For 52 years, Cleveland has lived in hope and died in desperation.  Some of the least pleasant losses in sports history have been authored by Cleveland teams.  When Michael Jordan hit “The Shot” over Craig Ehlo, Cleveland mourned, but nothing like they did after the Browns lost back-to-back AFC Championships in 1986 and 1987 because of “The Drive” and “The Fumble”.  Late last night, all that misery was washed away with a LeBron James swat of an Andre Iguodala layup.

1 – It happened on Fathers Day.  Being a sports fan is passed down from generation to generation.  Each of us learned how to invest emotionally in local teams through our dads.  That the first championship in Cleveland in more than a half century was earned on the day we celebrate the impact our fathers have had upon us is perfectly just for Clevelanders.  Those Cavs fans who were lucky enough to spend last night with their dads need to understand just how magical that moment was.