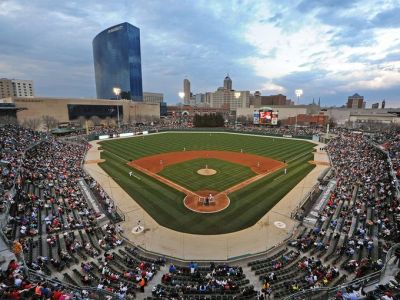 No better place in Indy on a June night than Victory Field.

These are the doldrums for Indiana sports fans, people will say.

Between the Indianapolis 500 and first Colts preseason game, those who enjoy sports hibernate a little bit in Indiana.

You might have to look a little harder, but there is so much going on that I have to make a difficult choice as to what I will either do or watch every night.

You say nothing is going on – I say different.  The month of June is chock full of fun, if you know where to look.

Here are 10 great events that can occupy your time and attention during June (some have occurred already, but mark your calendar for next June!):

10 – NCAA Spring Championships.  They aren’t held in Indianapolis, but track & field, softball, and baseball championships are televised during late May and June, and I love all three.  Every race in track is a novella unto itself, softball moves at the pace I wish baseball did, and baseball is a good time too – especially when Indiana, Louisville, or other teams featuring local talent compete.

9 – Colts Minicamp.  Until training camp starts, this is our best opportunity to figure out what kind of a team the Colts will have.  It’s pointless to extrapolate from the on-field activity whether the Colts can win another Super Bowl, but talking to the players can bring some insight.

8 – Indiana Children’s Wish Fund Celebrity Softball.  I love this event for a variety of reasons.  Every late spring – usually on the last day of Colts minicamp, the Colts, Pacers, and various media knuckleheads head to Victory Field for a night that puts the fun in fundraising.  The athletes are relaxed and eager to mingle with fans, and the best part is that all the money goes to one of the best charities in Indiana.

7 – U.S. Olympic Diving Trials.  Beginning tomorrow, the competition that will determine the group of divers who will represent the United States in Rio will be held at the IU Natatorium at IUPUI.  Diving is fast paced and more interesting than the size of the crowds would suggest.  The grace of the athletes combined with the obvious unending work required to turn, twist, and flip while falling 40 feet into the water is incredible.

6 – Cubs Baseball.  The Cubs are rolling this season, and their first trip to the World Series since six weeks after the end of World War II would be a thrill for long-suffering fans of America’s best loved losers.  Joe Madden is one of the best managers in the game, and the young nucleus of talent at Wrigley Field is the best in 80 years.  We get to watch almost every game on TV, but a trip or two to Chicago this summer is worth the three-hour drive.

5 – Indiana High School All-Star Series.  Sure, Indiana beats Kentucky twice every year (as they did last weekend) in a series that has certainly seen better days, but watching the Indiana team come together to represent this basketball crazy state is wonderful.  Hopefully, the series gets a jump start with a new format soon (my new pet project), but regardless of who the all-stars play, it’s fun to watch.

4 – NBA Draft.  There is nothing quite as useless a waste of time as trying to outguess Pacers president Larry Bird as he evaluates potential draftees.  This year’s draft is fascinating with proven four-year players like Michigan State’s Denzel Valentine and North Carolina’s Brice Johnson as well as projects like Canada’s Thon Maker and Kansas freshman Cheick Diallo who all might be available when the Pacers choose 20th.  Next Thursday should be a fascinating evening as we await wait on who will join Nate McMillan’s squad next season.

3 – Indianapolis Indians.  I don’t spend nearly as many summer evenings at Victory Field as I should.  The ballpark is still spectacular as it enters its third decade as a downtown fixture.  The baseball is good too, as the Indians just completed a sweep of the Pawtucket Red Sox.  There are few experiences as sweet on on Indianapolis summer night as sitting on the left field lawn with an ice cold man soda while watching the next generation of Pittsburgh Pirates play our national pastime.

2 – Indiana Fever.  The Fever are 4-7 through the first third of the WNBA season – the last for Tamika Catchings as a player and Stephanie White as a WNBA coach.  The Fever are coming off a trip to the WNBA Finals, and with Briann January returning to full speed, it’s likely the Fever will find their mojo – as they did after a slow start last year.  Enjoy this season as Tamika is one of the best players/people in the history of Indy sports, and White is a dynamic leader who has served as an outstanding role model for coaches and business leaders during her brief time as Fever coach.

1 – NBA Finals.  The Finals are alternately dull and thrilling, and while the current series between the Cleveland Cavaliers and Golden State Warriors has featured exactly zero close games during the first six, the world awaits game seven with baited breath.  Both teams have scored exactly 610 points, and LeBron James efforts to bring the Cavs back from the dead have re-asserted the King as the best player of his generation.  Sunday at 9p, we will either root for or against LeBron because that’s what watching sports is all about.