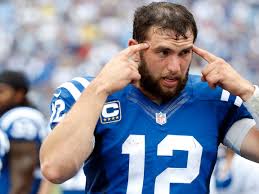 June is the time for Indiana sports fans to dream, and today we dream big.

The Colts were one win away from a Super Bowl just 17 months ago, Indiana has won the Big Ten twice in the last four years, and the Pacers are coming off a nice bounce back season where they played an Eastern Conference finalist to a game seven.  This would seem to be a time to where dreams might come true.

And so without apology or self-condemnation, we offer 10 Indiana sports dreams to could make the next year a lot of fun if they come true:

10 – Josh Newkirk becomes next Yogi Ferrell for Hoosiers.  The big question for the Hoosiers, who are deep everywhere but at the position that Ferrell vacates through graduation, is point guard.  Newkirk becoming a point guard that can defend at Ferrell’s level and distribute the ball to the Hoosiers many weapons would elevate expectations toward hoisting a sixth banner in early April.

9 – Offensive line help from the draft keeps Luck clean.  The Colts drafted four offensive linemen two months ago to help open holes for Frank Gore and protect Andrew Luck.  If two of them are able to contribute at a high level in 2016, that would be a great result.  If all four show competence, the Colts will return to the playoffs and have a shot to advance a few times through the playoffs.

8 – Kevin Durant bumps head, decides to become a Pacer.  This is a ridiculous pipe dream, but Durant is going to sign with an NBA team.  The Pacers are an NBA team, so they might be able to invest the very serious cap room ($35M or so) they have on a splendid talent like Durant.  Is it likely Durant pledges Indy?  Nope, but within that small window of hope lies our grand dream.

7 – Robert Mathis returns to form and enjoys one more explosive season.  Mathis is 35, coming off a season that was equal parts rehab and production after tearing his achilles during a workout in 2014.  It would be a wonderful reward if Mathis could play 16 more weeks as the disruptive force he was in 2013.  Another two seasons at a high level would put Mathis in a very good spot as a hall of fame candidate with a top 10 spot in career sacks.

6 – Paul George reaches potential as 1st team all-NBA player.  If the Indiana Pacers are going to contend for a championship any time soon, they will do it with George as their lynchpin.  He has a ways to go to become that level of player both physically and mentally.  Now is the time for George to show who he is – and can be.

5 – Butler and Purdue replace massive losses of senior leadership and keep rolling.  Butler lost Roosevelt Jones and Kellen Dunham while Purdue waved goodbye to A.J. Hammons and Rapheal Davis.  Good players and good to great leaders are hard to replace, but that is what positive cultures do.  If Kelon Martin/Tyler Lewis and Caleb Swanigan/Ryan Cline can step into the void, both Butler and Purdue can have very good seasons.

4 – Andrew Luck perfects the “slide & survive”.  Luck is disruptive when he is on the move, but being on the move puts Luck’s health at risk.  If Luck gets hurt, a season is lost.  That is why it is imperative that Luck embrace the notion of ending scrambles without contact.  Luck always delivers a little more punishment than he absorbs, but the cumulative effect of that contact robbed Luck and the Colts of a fourth straight 11-5 season in 2015.

3 – Mike Conley signs with Pacers and Pacers become contenders.  It is said by smart people who invest their intellect in understanding basketball that the Pacers are a point guard and stretch four away from making the leap to just behind the Cleveland Cavaliers in the Eastern Conference.  There is no better point guard on the free agent market than Conley.  His defense and playmaking would provide a significant boost to the Pacers.  He went to high school at Lawrence North and might have a soft spot for Indy.

2 – Tom Crean continues to evolve into the next John Wooden.  I’m very pleased that Crean has stopped selling, and started behaving like the head basketball coach of Indiana University.  We will find out whether Crean’s changed temperament will yield more March success, but it certainly has made him a better representative of the program for which IU is best known.  Two Big Ten titles in four years is not chopped liver, but success in Bloomington needs to be measured by the number of games won in the NCAA Tournament.

1- New Colts defensive coordinator Ted Monachino is true to his word and Colts defense attacks.  Every DC walks into a gig extolling the virtues of playing an attacking defense.  The problem with an attacking defense with the wrong personnel is they give up yards and points in bunches.  Every team would love to have the 1985 Bears defense, but if Buddy Ryan hadn’t had Dan Hampton, Mike Singletary, Otis Wilson, Wilbur Marshall, Gary Fencik, Dave Duerson, Richard Dent, and Steve McMichael, we wouldn’t know who he is.  If Monachino can scheme aggressively with the talent he has at his disposal, that will make the Colts a lot more fun to watch.