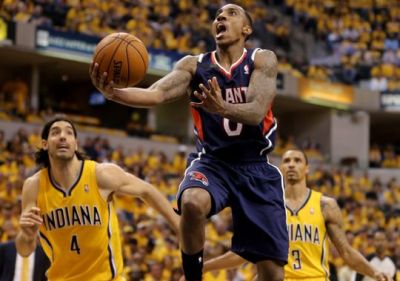 One hometown hero swapped for another.

It’s easy to be conflicted about this deal.  We watched George Hill lift an otherwise mediocre Broad Ripple High School team to relevance a decade ago before doing the same thing with IUPUI and helping the Pacers to consecutive Eastern Conference Finals, but we also enjoyed Jeff Teague at Pike High School a couple of years later.

Hill is on his way to Utah while Teague is coming home to Indy, (the #12 pick in tonight’s draft goes to Atlanta).  Sad, happy, excited, disappointed – there are a lot of emotions for Pacers fans to grapple with this morning.

Given that today is draft day in the NBA, there will be more immediate change – either by the Pacers standing pat and selecting at #20 and #50 or through another trade – maybe a series of trades.

That’s life in the NBA.

Roster turnover is a fact of life for players, coaches, and fans.  Pacers president Larry Bird explained the change in coaches that sent Frank Vogel to Orlando by saying coaches lose the attention of players after three years.  With Hill gone, and the possibility of free agency Ian Mahinmi not returning, the only Pacer left from the team three years ago is Paul George.

Clearly, the Pacers are embracing change with an uncommon but perhaps ultimately successful enthusiasm.

Here are the top 10 ways Pacers fans can look at the Hill for Teague deal:

10 – Goodbye to a community icon.  George Hill worked hard to impact Indianapolis in a positive way, and Teague will be measured against Hill with that metric as well as what happens on the floor.

9 – The Atlanta Hawks may get the best end of the deal.  I don’t subscribe to this, but the Hawks received a lottery pick in an exchange of assets where neither of the other two parties got one.  If the Hawks draft, oh let’s say, the next Kawhi Leonard, this trade will stick out as a clunker in exactly the same way George Hill for the draft rights to Kawhi Leonard does today.

8 – Teague is a younger and better version of Monta Ellis.  Maybe the acquisition of Teague allows the Pacers to deal the iconoclastic Ellis for yet another piece of the puzzle.  Teague and Ellis are probably a little more similar to one another than Teague and Hill.  If Al Horford comes to the Pacers as a free agent, they may choose to invest the #20 pick in a two guard like Denzel Valentine who can play alongside Teague.

7 – As a slight evolution toward youth.  Teague is 25 months younger than Hill, and while that isn’t a huge deal, younger is better than older, especially when an extension is discussed.

6 – Evidence that the Pacers under Larry Bird are willing to attack the market.  Building through the draft is nice, but changes are required to remain competitive.  Pulling the trigger on this deal shows a drive to continue the work needed to find the right combination of players to win and win big.  The status quo was worth 45 wins last season.  The odds of 45 wins ballooning to 55-57 without significant roster change was a longshot.  Prudent impatience is a hallmark of great leadership.

5 – As a trade of players who view Indy differently.  Hill has told people privately that he planned to leave as a free agent after next season while Teague is reportedly interested in signing an extension to remain in Indy.  Given all that, the Pacers have a much better chance of retaining an important asset moving beyond the upcoming season with Teague than Hill..

4 – Swapped deck chairs on a sea-worthy but mediocre boat.  Hill and Teague are very similar players in exactly the same contract situation.  They are remarkably alike in their statistical importance for their teams despite different skill sets.  Both are good, not great.  Both have led their teams to some success, but never sniffed a championship.  Both can score, but neither is dynamic.  Both can defend, but neither are stoppers.

3 – See Jeff as a piece that might lure free agent Horford.  This is pure conjecture, but with Horford as a free agent big who showed for the first time last year an ability to hit three-pointers, Horford would be a remarkable snug fit for the Pacers as they continue to evolve their roster toward being among the most dynamic offenses in the East.  I would love for the Pacers to pick Brice Johnson at #20 tonight, but given a choice between Horford and Johnson at the four, I’ll take Horford – at least for the next couple of years.

2 – As a release from an unpleasant situation for George.  One thing became clear through the 2015=2016 season – that George Hill was not thrilled to be here.  He wasn’t sullen and didn’t mope, but he was clearly disenchanted with his use on the offensive end.  Being told to stand in the corner to spread the floor was beneath his ability, and he knew it.  At the age of 30, his career clock is ticking more and more loudly.  He needed a change of scenery, and Utah qualifies.

1 – Welcome Jeff as a piece of a championship puzzle.  This is a stretch, but it can be listed among the choices.  The Pacers are a mostly pleasant diversion for us, and being wrong in our emotional investment brings no serious consequences, so why not view Teague through the prism of potential excellence?  Teague, Paul George, Myles Turner, Horford (?), and whomever the Pacers take at #20 could be a potent force in the East, and with a little luck might put themselves in a position to earn a spot in the NBA Finals.