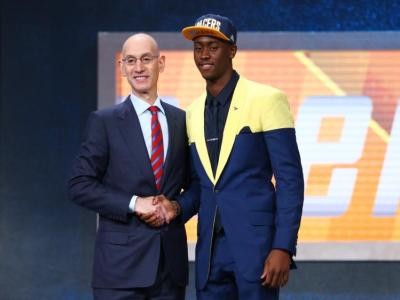 If you like the look of Caris Lavert in a Pacers cap, don’t get used to it.

Dreams are granted.  Dreams are crushed.  That’s the NBA Draft in a nutshell.

Last night’s draft was filled with fun and surprises, as were the two days prior for fans of the Indiana Pacers.

A trade sent one Indy native to Utah of all places, brought home another native, filled a gaping hole at power forward, and sacrificed a potential good player at #20.

Years from now, we will look back at the potential all-stars and busts taken from #20 back in the draft to see how they measure up against Thaddeus Young, the power forward the Pacers received from the Brooklyn Nets in return for that pick.

Last night was the kind of night where we can all play along with general managers in evaluating trades and draft choices, and all 30 GMs hope they are right because if they can’t outguess us, their careers will be at a merciful end.

10 – Orlando sends Victor Oladipo and Domantas Sabonis to Oklahoma City for Serge Ibaka.  This deal wouldn’t bear mention if Oladipo had not been a Hoosier.  Ibaka is in decline.  Vic has not lived up to his #2 overall selection in 2013.  Sabonis?  He might be pretty damn good eventually.  Unlikely either Ibaka or Oladipo last in Orlando or OKC beyond next season – the final year of their current deals.

9 – Tom Crean’s strange rant about Troy Williams.  I understand extolling the virtues of one of your draft eligible players, but claiming that Troy Williams has one of the highest basketball IQs he ever coached is one of three things – a lie that he hopes one of the 30 NBA GMs buys, a belief he holds in abject isolation among those who have ever watched Williams play, or a prank played on Crean by editing disparate statements together like a post-production version of Mad-Libs.

8 – A.J. Hammons taken #46 by the Dallas Mavericks.  Over and over again, analysts quoted NBA front office types and those who played with or coached Hammons, “He has lottery talent, but the desire to get to his potential might be lacking.”  He has size, length, strength, and a sweet midrange stroke that will make him a productive pro.  I can’t crawl around the guy’s brain based upon five or six interviews, but I always liked him and thought he was more than capable of understanding the level of effort required to take a roster spot from another seven-footer with a dream.  This is a roll of the dice pick I like because I like Hammons.

7 – No one can talk about trades until July 6th when they are confirmed.  The explanations for the rule that compels team officials to remain silent about trades that have been consummated are nonsense.  That rule also compels draftees to be presented with the wrong cap.  For instance, last night the Pacers dealt the 20th overall pick to the Nets, Caris Lavert was forced to plop a Pacers cap on his head for the commemorative photo with commissioner Adam Silver instead of the cap of the Brooklynn Nets – the team for which he will likely play.  Abject silliness.

6 – We need another Furkan Korkmaz over here!  While the Indy media sat waiting for hours to see who the hell the Pacers would take at #50 and make certain they were around in case Bird decided to trade up, we amused ourselves by yelling “Who’s ready for another Furkan Korkmaz!” and other mildly amusing permutations of the Turkish star’s name as he slipped further and further down the draft to the #26 pick.  We had to do something for four hours to break the Furkan Korkmaz, didn’t we?

5 – No one drafted Yogi Ferrell.  Throughout his senior season, I came to believe that Ferrell is more than capable of defending well enough to earn a spot on an NBA roster, and his efforts in workouts for NBA teams confirmed those beliefs, according to reports.  Ferrell has a great basketball IQ, can shoot from beyond the arc, and distributes well.  There was no reason for Ferrell to be stuck behind Keckucky sophomore Tyler Ulis, but while Ulis was taken early in the second round, Ferrell waited.  And he continued to wait until the night ended.  He’ll sign as a free agent with a team in need of a point guard.  Might be the best thing that could have happened for him.

4 – The #20 pick for Thaddeus Young.  A good player on a long series of bad teams was sacrificed by the Brooklyn Nets to allow them a pick in the 1st round last night.  Young averaged 15 points and nine rebounds per game last season for a Nets team that finished 21-61.  If he can duplicate those numbers for the Pacers as they work to improve upon their 45-37 record, this trade will have been a short-term steal.  if not, the Pacers may have passed on the opportunity to draft a more productive player in the long term.  The Nets bet Caris Lavert can stay healthy enough to be worth Young’s loss.

3 – Pacers lone bounty is Iowa State’s Georges Niang.  He’s a fringe NBA prospect who spent four years helping Iowa State emerge as a college basketball force.  Ben Bentil of Providence was the next guy taken, and I really like Bentil.  ESPN’s Jay Bilas said about Niang, “He has an old man’s game,” which I believe is a compliment.  Hey, he’s a second rounder.  If he finds a way to get on the floor to contribute, it’s a victory.

2 – Thon Maker drafted #10 by the Bucks.  There were rumors that his draft stock might be affected by reports that he is significantly older than 19.  There is no denying the upside for a 7’1″ athlete who can run, handle a bit, and shoot with range, but the Bucks investing the #10 pick in a kid (or man) whose highest level of basketball was Canadian high school is a reach longer than Maker’s long arms stretch.  Whether he is capable of competing at the level required to build a significant NBA career won’t be known for years.

1 – Jeff Teague for George Hill trade.  This deal had been rumored to be in the works for months, but it was still hard to believe when it was announced.  Hill has been a part of some very good Pacers teams and didn’t appear to be in any state of decline, and Teague is a good player not quite as good defensively while being a more productive offensive player.  The trade of one hometown hero for another shouldn’t have taken us by surprise, but it did.  Whether it makes the Pacers better will be obvious a year from now.