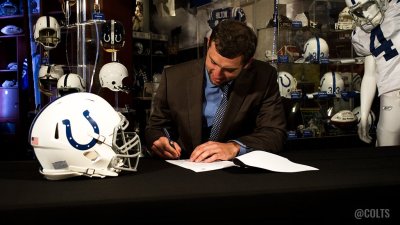 Andrew Luck signs the contract that makes him the NFL’s best paid player.

The guaranteed money is an astounding $87 million over the next six years – $22 million more than the next biggest deal, the $65 million guaranteed to New York Giants quarterback Eli Manning.

Luck has never won a Super Bowl, or even played in a Super Bowl.  He’s never led the NFL in passer rating or QBR, and most experts feel he slots just outside the top five in rankings behind Aaron Rodgers, Tom Brady, Ben Roethlisberger, Cam Newton, and Drew Brees.  Carson Palmer and Russell Wilson are also pretty damn good.

Some fans and media are asking why a quarterback in the back half of the NFL’s top 10 is worth 25% more guaranteed jack than any other player in league history.  While the question is legit, the answers are too.

Here are the 10 reasons Luck is worth every penny of the $87 million he is guaranteed through 2021.

10 – After lucking into both Peyton Manning and Luck, hoping for a third straight generational QB is too much to ask.  For every Manning and Luck, there are five Sam Bradfords and David Carrs who are taken #1, but fail to fulfill expectations.  Luck possesses a rare combination of athleticism, intellect, and character that projects forward toward a Super Bowl championship – or multiple championships.

9 – Last year was an aberration.  Luck played seven games last season, and the Colts were 2-5 in those games.  That means that backups were 6-3.  Does that make sense to anyone?  Of course not, so I am choosing to overlook it completely.  Even a cynic like me is willing to look back at 2012-2014 as more indicative of Luck’s career path than the weird and injury filled 2015.  Luck’s stats across the board were down in his fourth year, but over the first three, he was in steady ascension toward greatness.

8 – Luck checks ALL the boxes.  He can run, throw, lead, think, and behave, which makes Luck a unicorn among NFL quarterbacks.  If you are going to invest historic money in a single player, you should do it with a player – and a person – who absolutely understands his role in the community as well as on the field.  Athletic enough to win a Super Bowl and smart enough to win a Nobel Prize is one hell of a skill set for the face of a franchise.

7 – Offensive line has to be better, right?  The Colts invested four draft picks on offensive linemen two months ago, including Ryan Kelly, who will be Robin to Luck’s Batman.  The O-line will be better – or else!  If you owned a porcelain vase worth $87 million, would you ship it without bubble wrap and styrofoam peanuts?  Nope!  If Colts GM Ryan Grigson and coaches Chuck Pagano and Joe Philbin can’t draft, develop, and correctly employ offensive linemen capable of keeping Luck on his feet, they will be replaced – and should be.

6 – He could have gotten more.  Luck was the perfect NFL player to bridge the gap between guaranteed and total money.  While $87 million is a ton of jack for 96 Sundays of work, there are still $53 million in his contract that Luck might never see.  In the NBA and MLB, virtually every cent is guaranteed.  Players in those leagues are far less likely to lose time due to injury, and they play on teams with smaller rosters, but Luck could have tried to hold firm as a trailblazer to establish guaranteed deals as a possibility in the NFL.

5 – Luck is entering his prime while many of the other top 10 are entering their twilight.  Luck will turn 27 on the day after the 2016 opener, which means that this six-year swath of time covered by this contract will almost perfectly cover his athletic prime.  As we look at current expert quarterback rankings, among the top five only Newton will be under the age of 33 at the end of the 2016 season.

4 – We don’t have to listen to evasive answers to extension questions through camp.  As monotonous as the questions were about signing an extension became for Luck, it was even worse for fans.  Luck will have to stand at a podium one more time (before 2020) to answer questions about his financial well-being.  Thank God.  he was sick of it, and so were we.

3 – Least likely pro athlete to be affected by infusion of cash.  Producer Scott Agness asked me yesterday what I thought Andrew Luck would buy first with the proceeds of his initial $18M signing bonus (he gets another $14M paid in nine months).  I joked, “A new bicycle helmet!”  Then I thought about it, and I might have been right.  The QB with a flip phone and bicycle that he uses to move around downtown Indy is not likely to buy a Bentley or Rolls.  I can’t see him buying a bejeweled crown and scepter for the mantle.  Luck is building a sweet house he designed, but that’s hardly the kind of indulgence we are talking about.  His effort on the field won’t be impacted either.  Luck is getting paid because he plays hard – he won’t play hard because he’s getting paid.

2 – Can’t win a Super Bowl without a franchise QB.  There are 53 men on every NFL team’s active roster, and they all serve a purpose.  None is close in importance to whether a team wins or loses than the quarterback.  Without Luck, the Colts are ordinary in the extreme, as the Patriots would be without Brady or the Steelers without Roethlisberger.

1 – Would you rather Jim Irsay kept the cash?  The NFL prints money for its franchises.  I was told be a former major league owner that his cat could run an NFL team and net $40 million.  That was 15 years ago.  I much prefer a player like Luck wisely investing and donating his money than an owner strip mining his asset so he can buy another gross of diamond bedazzled trinkets to pass out to money grubbing cougars.  Irsay invested in his most valuable asset and it was cash well spent.