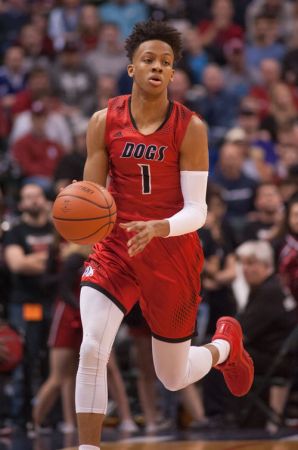 How good can New Albany’s Romeo Langford be is one of the 10 questions about basketball to be answered this year.

What a year of hoops action Indiana basketball fans have to look forward to.  So much potential for thrills and heartbreak with every shot, pass, and recruiting visit.

This is why we love basketball – virtually anything can happen, and it likely will over the next 10 months.

Some of the biggest stories in Indiana that may lead to even bigger news in 2016-2017:

The Pacers have made some serious adjustments to their roster and staff.

Tom Crean appears to be a different kind of leader in Bloomington.

The high school talent level has never been higher.

Jason Gardner might have IUPUI ready to win big.

Matt Painter needs a run in March to silence critics.

Lest we forget our neighbors to the south:

Louisville is going to have to answer for running a brothel in its basketball dorm.

Kentucky seems not to possess the cache they once did as a development outpost for the NBA.

Here are my top 10 area basketball questions that will be answered during the upcoming season/year:

10 – Can Paul George avoid Zika Virus and upset at Rio Olympics?  Athletes are bailing on the opportunity to participate in the 2016 Summer Olympics for a couple of reasons – sanitation is reported to be horrendous in the fresh water events like rowing, and mosquitoes there carry a virus that can cause miserable birth defects.  Paul needs to pack some Off!, stay out of the ponds, and help the United States win a gold medal that seems to have become a birthright for the United States.

9 – Will Tom Crean, Chris Holtmann, or Matt Painter grab monster 2017 class from home state?  Kris Wilkes, Jaren Jackson, Malik Williams, Zach Gunn, and Paul Scruggs are among a very talented group of seniors-to-be in Indiana.  Get one, that’s a step forward in recruiting Indiana.  Get four of five, plus Romeo Langford in 2018, and start sewing banners.

8 – Can Butler continue winning without Kellen Dunham and Roosevelt Jones?  Butler returns talented players like Kelon Martin, Tyler Lewis, and Tyler Wideman, but the loss of two players who have been significant cogs in the Bulldogs machine for what seems like the last 15 years might be difficult to overcome.  Dunham and Jones have been program cornerstones like Matt Howard, Shelvin Mack, Gordon Heyward, A.J. Graves, Joel Cornette, Brandon Miller, and Mike Marshall before them.  Replacing everything Dunham and Jones took with them as they walked out of Hinkle for the final time will be a great challenge for Holtmann.

7 – Will Pacers build on 45-win season following departures of Frank Vogel, George Hill, and others?  Lots of change at Bankers Life Fieldhouse.  Gone are Frank Vogel, George Hill, Solomon Hill, Jordan Hill, and Ian Mahinmi (likely), and in are Nate McMillan, Jeff Teague, Thaddeus Young, and Georges Niang.  That might be really good for the Pacers – maybe it won’t be.  Time will tell.  Right now – Teague for Hill is a short term push, and maybe a long term gain.  Young is better than the #20 pick right now, but that deal will eventually be a long term loss.  McMillan for Vogel is a wait and see move.

6 – Can Matt Painter find a path to March success?  After two straight opening round overtime losses, Boilermaker fans are getting a little bit nervous about the prospects for future success in the month of March.  This season will find Purdue filled with talent, so expectations are high.  If Purdue loses again in the first round, the normally docile West Lafayette fan base might begin to chant unpleasantries at alum events.

5 – Is IUPUI ready to jump to top of Summit League?  Jason Gardner has a very nice looking team on paper.  He has transfers like Ron Patterson who are Power Five level talents, and homegrown players who got a taste of success last year when the Jaguars shared the conference’s top spot halfway through the season.  This might be the year Gardner gets IUPUI rolling.

4 – Will Romeo Langford become the best high school player ever from Indiana?  One thing is for sure – Romeo Langford is different from any other player I have ever seen.  His combination of explosiveness, limitless range, rebounding savvy, ball-handling skill, and team first demeanor is unicorn-esque.  As a sophomore, Langford led the Bulldogs to the 4A state championship, and this year he is probably the biggest drawing card in the Louisville market, including Rick Pitino’s Cardinals.  If he stays healthy, Langford has a legitimate shot at Damon Bailey’s all-time scoring record.

3 – Will Louisville and Rick Pitino pay a larger price for Whorehouse Dorm?  The NCAA continues to investigate the scandal that erupted with the release of the tell-all book by prostitute/madame Katina Powell and journalist Dick Cady.  Strippers and prostitutes, according to Powell were paid by a member of Pitino’s staff to service players, recruits, and family members of recruits in a university dorm.  If the NCAA decides the self-imposed sanctions aren’t enough, Pitino’s job could be in jeopardy.

2 – Is the Tom Crean evolution for real, complete, or a work in progress?  I like the new Tom Crean.  He’s a more real guy, and a little less the relentless seller of his program that we saw during his first seven years in Bloomington.  Hopefully, this is the real Crean that fans will see for the remainder of his time in Bloomington.  If there is a backslide to the old Crean, his next sub-par season might be his last in Bloomington.  If he continues down this path of reason and likability, Crean might raise another banner in Assembly Hall.

1 – Is the bloom off the rose at Kentucky?  Skal Labissiere came to Lexington as a presumptive top five overall pick in the 2016 draft, and fell to 28th when he was selected last Thursday night.  Spending a year in Kentucky under the tutelage of John Calipari evidently wasn’t the magic elixir for brand and game building that Cal touts at every opportunity.  Tyler Ulis was at UK for two years, and was taken #34.  Maybe, like many believe, it’s not so much the developmental plan instilled by Cal, but his recruiting “magic” that releases so many players to the NBA after spending 10-22 months in the Bluegrass State.