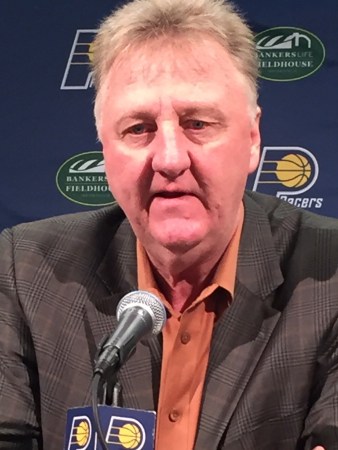 Pacers president Larry Bird has been busy this offseason preparing the Pacers to win now.

The Indiana Pacers are better today than they were one month ago.

That is team president Larry Bird’s job, and on paper he’s improved the Pacers through two trades, (a third trade was executed, but facilitated a salary dump for the Dallas Mavericks), two free agent signings, and the replacement of his coach.

The only potential issue is with the coaching swap.  Time might prove Nate McMillan a better coach than Frank Vogel, but it’s way too early to hail that swap as a net plus for the Pacers.

Below is a list of the move the Pacers have made in order of importance toward a more positive season is 2016-2017.  For instance, the biggest deal in terms of fan interest was the trade of George Hill for Jeff Teague. That’s ranked fifth because the Pacers will miss Hill while welcoming Teague.

Included are also some roster losses where the Pacers chose not to pay players at the same level as those who coveted them.  Those are evaluated against the money the Pacers chose to invest elsewhere.

And Bird might not be done molding his team, but given the reported signing of Aaron Brooks it seems that the initial flurry of wheeling and dealing has come to an end and the roster might be a move or two from being set.

Here is the list of top 10 moves made by the Pacers this offseason – ranked by level of obvious positive impact on the team:

10 – Pacers acquire Jeremy Evans and cash from the Dallas Mavericks in exchange for the draft rights to Stanko Barac.  This was a salary dump by the Mavs.  Maybe Evans contributes to the Pacers.  Maybe not.  The good news is that the Pacers reportedly received $2-million more cash from the Mavs than Evans will cost.  That news likely made Pacers owner Herb Simon smile.  It’s good to make the owner smile once in a while.

9 – Pacers hire Bill Bayno as assistant.  Bayno seems to be a funny and outspoken voice among a serious group of coaches.  McMillan is quiet and deliberate, so hiring his behavioral opposite shows a willingness to fill a void.  That’s a positive for McMillan.  Bayno being hired is also a good thing for media, who like to talk to those who entertain.

8 – Solomon Hill signed by New Orleans Pelicans – four years/$50-million.  Sometimes the best deals are those you don’t make, and the Pelicans overpaying for a good bench player allowed the Pacers to spend that level of jack elsewhere.  I look at Hill leaving as a swap for Al Jefferson, who cost a couple million less.  It’s true that the Pacers could have guaranteed Hill’s contract for 2016-2017 at less than $3-million, but would Solo have had the late season run for big cash he enjoyed without the safety net being removed.  This was a win/win.

7 – Replaced Frank Vogel with Nate McMillan.  This might be the most important change made by Bird during the offseason, but who knows whether it will be good, bad, or indifferent.  McMillan might provide the fresh voice Bird is hoping for, or Vogel’s loss may cause problems for a team that seemed to outperform its talent during his time in Indy.  Vogel was unemployed for a couple of days before the Orlando Magic snapped him up at twice the salary the Pacers paid him.

6 – Drafted Georges Niang #50.  Niang is a superior offensive player to Solomon Hill, but nowhere near his equal on the defensive end.  People who watched Niang through his entire career at Iowa State are curious who Niang is going to guard in the NBA, but that doesn’t mean he can’t be coached into being a better defender.  The only real sign this pick might be a miss is that Fred Holberg – the coach who recruited and worked with Niang at Iowa State – passed on him at #48 in favor of another small forward named Paul Zipser.

5 – Swapped George Hill for Jeff Teague.  This three-team deal was more complicated than Hill for Teague, but the bottom line is Hill leaves and Teague arrives.  This was obviously a big trade, but my excitement over the acquisition of Teague is countered by my disappointment in losing Hill.  Teague is a very good offensive point guard – more consistently aggressive than Hill, who is a better defender than Teague.  if the Pacers get Teague signed to an extension, this becomes a much better deal because Hill was likely to leave after the 2016-2017 season.

4 – Ian Mahinmi leaves for $16-million per year for four years.  See #9.  If the choice was spending $64-million to hold onto Mahinmi or to say goodbye, Bird made the only sensible call.  Mahinmi is a competent rim protector who is occasionally productive on the other end while being a poor foul shooter.  There are a lot of Mahinmis running around professional basketball.  No point in paying top dollar for flank steak, when a ribeye is on the menu at the same price.

3 – Pacers agree to terms with Aaron Brooks.  The glaring need for the Pacers as this roster came together was at back-up point guard, and there are few back-up point guards that check as many boxes as Aaron Brooks, formerly of the Chicago Bulls, Denver Nuggets, Houston Rockets, and two other NBA teams.  At 31, Brooks knows who and what he is.  To sign Brooks to a one year/$2.5-million both addressed the need and left enough cash to negotiate a new deal with Teague.

2 – Signing Al Jefferson to three-year deal.  A nice economy signing, Jefferson will only cost the Pacers $10-million per year.  Jefferson is coming off the least healthy season of his career, and pro athletes don’t generally regain health after turning 30, but this was a beautiful roll of the dice for Bird, who only needs Jefferson to play 20-22 minutes per game as a back-up to Myles Turner.  Jefferson is capable of scoring against and defending big bodied centers.  A pro’s pro, Jefferson is also going to be a willing mentor for Turner.  If last season was an aberration, this move will be lauded when the Pacers win 55 games next year.  If last year signaled the end of productivity for Jefferson, it was still a solid risk.

1 – Acquiring Thaddeus Young for #20 pick in this year’s draft.  Heading into his 10th season at age 28, Young is in his prime as a power forward.  And he’s reasonably priced at roughly $13M per year for the next three seasons.  Young isn’t perfect – or an all-star – but he is a bigger piece to an improved puzzle than anyone the Pacers could have chosen with the 20th pick. The Nets took Caris LaVert with that pick.  If you are a Pacers fan, would you rather have Young or LaVert for the next three years?  Bird agreed.

In acquiring Teague, Jefferson, Young, and Brooks, the Pacers added 70.8 points per 36 minutes, while waving goodbye to 51.4 points per 36 minutes as the three Hills and Mahimni left.  Defensively, the Pacers might not be as strong, but the offensive leap is going to accomplish two things – they will evolve toward the NBA construct that appears to be most successful, and they are going to be a lot more entertaining.