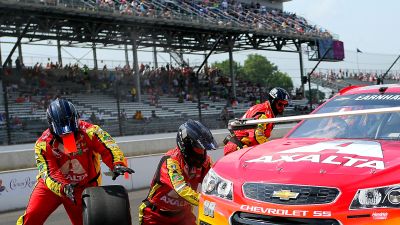 Jeff Gordon in the pits while the crowd for the Brickyard was the pits.

Kyle Busch won the 23rd running of the Brickyard 400 yesterday in front of dozens at the Indianapolis Motor Speedway.

At least it looked like no more than dozens.  The Indianapolis Motor Speedway is a gargantuan facility capable of holding more than a quarter million race fans – as it did for the 100th Indianapolis 500 two months ago – so when entire grandstands are empty, it’s easy to exaggerate weak attendance.

It wasn’t always like that.  The Brickyard used to be a tough ticket.  The bleachers were filled in all corners, and people in Indianapolis looked forward to the Brickyard with nearly the same enthusiasm as they did the Indy 500.  Then came the parades and mandatory red flags every 11 laps due to tire wear, and local interest plummeted.

Hoosiers are a loyal group until they feel violated, and then they never forget.  They haven’t forgotten the mandatory red flag race, just as they never forgot the Michelin fiasco with the United States Grand Prix.

There are plenty of reasons for the parade-esque racing at the Brickyard, and very few possible solutions.

Here are 10 ways to make the afternoon of the Brickyard 400 more enjoyable:

10 – More races.  This is actually a terrible idea that has no business on this list.  More bad races on Sunday would create more boredom, not alleviate that created by the Brickyard 400.  The Xfinity race on Saturday was no more thrilling than the Sprint Cup event.  Additional races that are exciting would make the Brickyard appear even less inspiring.  Maybe cutting the Brickyard in half to 80 laps would be a better #10.  “If an event bores people, bore them for less time,” is a terrible mission statement, but it beats boring them longer.

9 – Gambling.  Everything is more exciting with parimutuel wagering.  “Give me a $10 trifecta box with McMurray, Busch, and Logano!” makes watching 40 comparatively slow cars run in a circle 160 times much more fun.

8 – Run the race on the road course.  At least with a road course race, our expectations are for a parade.  This would only correct the Brickyard’s problems by creating another problem, but it beats the status quo – sort of.

7 – Change the schedule so the Brickyard is on the Saturday prior to the Indy 500.  There are so many reasons for this not to happen, it’s an absolute non-starter, but if you want a big crowd for a mediocre event, hold it where there is already a lot of people.  This doesn’t really fix the core problem which is the relentless and odious tedium of the race, but it would put people in the seats.

6 – Continue to build the ancillary party into the primary focus.  Kid Rock and Parmalee on Saturday was a good idea.  If the race becomes a part of the party instead of a virtual standalone event, the tedium of the race won’t matter as much.

5 – Lighten the car and increase the downforce.  Sounds like evolving NASCAR toward IndyCar, doesn’t it?  Yep, and for good reason.  The Indianapolis 500 is a hell of an exciting race.  Migrating the NASCAR equipment toward IndyCar would be a great idea – at least for the Brickyard 400.

4 – Build a one-mile oval using part of the original speedway.  If you eliminate the four holes of the Brickyard Crossing Golf Course, maybe there is a way to build a sub-oval in the same way the dirt track was constructed in turn three.  How would that work?  How the hell do I know?  I am not an architect – I’m an idea man.

3 – Take the Brickyard off the schedule.  TV is the primary financial driver for NASCAR, so the series doesn’t need a huge throng at the gate to make this race work, but it’s existence does nothing to build enthusiasm for the series.  The NASCAR brand is damaged by the Brickyard parade.

2 – Raise the corners.  The nine-degree banking has never been anything near ideal for NASCAR, so how about a re-design of the 2-1/2 mile oval that brings high-banked turns to Indy.  Obviously, this is heresy, but there are no bad ideas in a brainstorm, and we are brainstorming here.  If the powers that be made the call to alter the original configuration of the World’s Greatest Race Course, the outcry from traditionalists would be deafening and I would be right there with them.

1 – Go to a lake, ballgame, museum, church, or campground.  Judging by the empty seats, which far outnumbered the fans in attendance, this seems to have been the overwhelming choice among Indiana race fans.  They stayed away in droves, and I can’t imagine the TV ratings will reflect great interest either.  Who says you need to pay attention to every local event?