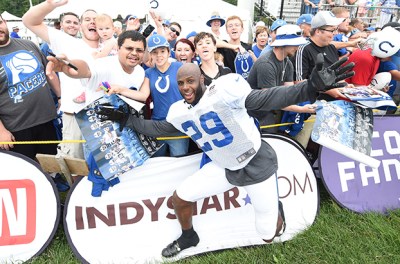 Indianapolis Colts training camp starts today, and thousands of fans jonesing for some football  will make the short drive to Anderson to get an eyeful of what should inspire substantial hope for a bounce back 2016.

Most of what happens in camp is difficult to project toward regular season success or failure, so figuring out what to watch and what it means is sometimes difficult.

There are two things I know about Anderson – the fast food employees there are the most courteous in the world and Good’s ice cream is the most delicious I’ve ever eaten.  Assessing the progression of the Colts is not the third thing.  Whether the Colts will be great or suck is impossible to distinguish because they compete against themselves.

There are a few things worth watching in Anderson if you make the trip.  Here are 10:

10 – Is Scott Tolzien a suitable replacement for Matt Hasselbeck as back-up QB?  Hasselbeck was incredibly accurate in every drill – a true tactician who worked tirelessly to keep himself ready to compete at the age of 40.  Unlike Hasselbeck, Tolzien has never succeeded as a starter, so it will be interesting to see what Tolzien does if Luck should miss time.

9 – Ryan Kelly embracing leadership role.  For the Colts offensive line to function at a high level, Kelly needs to be a leader of the offensive line from the first day at camp.   I hate to set difficult to meet expectations for a rookie, so it’s a good thing that Kelly is a born leader.  He won’t have to try to be a leader to get veterans like Anthony Castonzo, Joe Reitz, and Jack Mewhort to respond to his leadership.  It comes naturally to him.

8 – Health of Henry Anderson and D’Joun Smith.  Anderson is not expected to be 100% before the regular season opener – if then.  Smith played only 20 snaps last year, but appears to be physically ready for camp.  If he can play at the level he was drafted in 2015, Smith can provide depth at cornerback, a position where a team can never have enough quality players.  To what extent can Anderson use camp to get ready for action?  We’ll find out.

7 – Rookie Antonio Morrison with the ones or twos?  Morrison is the most intriguing member of the Colts 2016 draft class.  He has an ability to shed blockers and get to the ball carrier that is not a strength of the Colts inside linebacking corps as currently constituted.  Morrison has what coaches call “pop”.  If Morrison can get on the field with the ones, that means he has studied hard and well enough to make more plays than errors.  Morrison is an under the radar key for the 2016 Colts defense.

6 – Who’s at right guard?  Hugh Thornton is a perfectly built right guard, but has not been able to lay claim to the position during his time with the Colts because of injuries and maturity issues.  The clock is ticking on Thornton, who is entering his fourth season after being drafted in the third round in 2013.  if Le’Raven Clark can progress as right tackle quickly enough, Joe Reitz might be used as either right guard or a utility offensive lineman capable of playing almost anywhere.  Jonotthan Harrison is another candidate for the job, having been replaced at center by Kelly.

5 – T.J. Green’s ability to cover.  Green is a big, long, and fast safety drafted out of Clemson in the second round three months ago.  He has all the physical tools to be a star, but he has a lot to learn about the position, according to many who scouted him.  Green totaled 130 tackles last season, but only picked off one pass while playing for the 10th ranked defense of the Tigers.

4 – Josh Ferguson’s elusiveness.  Frank Gore is 33, and while we all hope he has another season of greatness in him, it’s likely the Colts will need to find another back to carry some of the load of the running game.  Ferguson is an undrafted rookie out of Illinois the Colts think very highly of.  He was a workhorse for the Fighting Illini, and tallied the second most all-purpose yards in program history.  Ferguson knows how to play, and needs to show what he has throughout camp to earn regular season snaps.

3 – Pat McAfee’s boomstick and personality.  It’s fun to watch McAfee launch kicks, whether punting or kicking.  He’s capable of making a 70-yard field goal, and occasionally bombs a punt 75+ yards.  Watching Pat kick is like watching golfer Dustin Johnson hit drives 370 yards.  And then at the end of practice, Pat shares himself with fans and members of the United States Armed Forces.  Laughs follow Pat wherever he goes, but on the field McAfee is all (mostly) business.

2 – Phillip Dorsett’s speed.  Injury robbed Dorsett of a normal regular rookie season, but in camp he was explosive.  It’s fun to watch Dorsett blow past DBs to settle underneath a long pass from Andrew Luck.  There are going to be a lot of jersey numbers running around in Anderson, but #15 will stand out immediately.  He has a unique burst that will draw your eyes.

1 – Andrew Luck’s enthusiasm.  There are things that stand out among the greats.  Reggie Wayne demanded perfection from his hands and worked tirelessly to earn and maintain it.  He made that clear working with the gun to catch hundreds of balls after every practice.  Luck is not a perfect thrower of the football, but he is a leader at a level few ever reach.  His determination to enjoy every second of every workout inspires others to do the same.  Luck sprints everywhere, smacks teammates on the butt at every opportunity, and makes it impossible for anyone to be bored during the most tedious portions of camp.