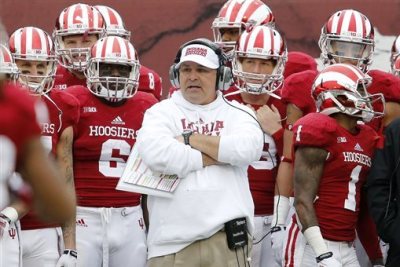 Kevin Wilson and the Hoosiers sounded like they are ready for the next step at IU Football’s Media Day today.

Indiana University’s football program is the losingest in the history of college football.

I bring that up only to reinforce the difficulty of executing a longterm pivot from terrible to bad to mediocre to good to championship contender.  It’s taken a long time to get here – wherever on that continuum you believe the Hoosiers to be – and it might take longer for the needle to move farther.

But one thing is for sure, the days of Hoosiers walking into a media room filled with gloom and doom are over in the wake of Indiana’s first trip to a bowl in a decade and their seemingly rational thoughts that more bounty is coming.

Things were different today, and it wasn’t just a bunch of smiles and platitudes.  This was the first time I have been at an IU Media Day where we weren’t being sold on the promise of improvement.

There was a quiet confidence that permeated all conversations with players and coaches that felt for lack of a better word – competitive.

Here are the 10 takeaways for a reasonable and fascinating IU Football Media Day:

10 – Slot receiver Mitchell Paige is IU’s Justin Bieber.  Last Friday, Paige dyed his hair blond.  With a Wes Welker build, Paige has never quite stood out on campus as a member of the football team, but with this blond hair, he is going to draw immediate curiosity among co-eds.  Not saying he did it to generate an influx of attention.  Some people lose a bet and bleach their hair.

9 – It’s “takeaway” not “turnover”.  Among the many changes new defensive coordinator Tom Allen brought to Bloomington is the need to use very active and specific language.  He insists defensive players view the opposing offense losing possession of the football as a takeaway, not a turnover.  The difference is that the offense turns the ball over while the defense takes it.  Taking it is active.  Waiting for the offense to turn it over is passive.  I love that.

8 – Indiana’s receivers are big.  Four of IU’s wide-outs are 6’2″ or taller and weigh 220 lbs. or more.  Those are big targets for whomever is throwing the football at <emorial Stadium.  It helps if they have good hands and great speed, but big is good, and at Indiana we take good.

7 – Extension has given Wilson and staff a calm focus.  After last season, Kevin Wilson was given a six-year extension with a substantial raise and a larger pool of cash for his staff.  The result was the kind of long-term planning that is impossible when you are fighting for your immediate career health.  It’s kind of like a guy with heart failure getting a prostate exam.  The prostate isn’t going to get you.  With a deal stretching through 2021, Wilson can continue to plot beyond the now as the first head coach since Bill Mallory to enter a sixth season running IU Football.

6 – Devine Redding is ready to be the next.  Tevin Coleman put together a historic 2014 season, and Jordan Howard followed suit at tailback last year with the 11th best year running the football in Indiana history.  It’s Redding’s turn, and his teammates are very bullish on the chances of his following suit. One lineman told me, “He doesn’t have Tevin’s speed or Howard’s ability to bruise, but he explodes through the hole and makes guys miss.”

5 – Defense is going to be aggressive.  Every incoming defensive coordinator in the history of football has preached aggression.  “We are going to play downhill!” they all say.  When Allen says his team is going to be aggressive, people believe it.  The quiet passion in his explanation of why a defense needs to dictate terms compels absolute buy-in – at least it has to this point.  He’s a unique guy whose lessons are being lapped up by a team thirsty for them.

4 – Kevin Wilson continues to mature.  During his first two or three seasons as head coach, Wilson and the media lived on opposite sides of a wide divide.  Wilson tried to sell a vision of the program (and himself) that no one was eager to buy.  Now, he just talks football with the media – no sales job, no credentialing – just football.  He’s likable, decent, and honest.  Wilson has evolved into a coach comfortable in his position and his own skin.

3 – Lots of fifth year seniors.  Indiana has an unusual number of red shirt seniors – fifth year players who are at the very end of their eligibility.  Many are on an offensive line that has spent the last two seasons opening gaping holes for Tevin Coleman and Jordan Howard.  This is a group that will run block well, and if they can protect whomever Wilson decides should play quarterback, that young man’s entry into being a starter will be a smooth transition.

2 – There is no starting quarterback yet.  The battle right now is between Richard Lagow and Xander Diamont.  Fans know Diamont.  He’s a runner who can also throw a little bit.  Lagow comes from a junior college, and he is a more traditional quarterback who has never played at anything near the Big Ten level.  Players who were asked about the quarterback battle were obviously coached to voice no preference, but when Wilson and offensive coordinator Kevin Johns explained why neither might win the job outright, I bought that there is no frontrunner in this battle.

1 – The evolution did not end with the New Era Pinstripe Bowl.  The players each lamented losing the bowl game to Duke, and seemed quite unimpressed with the accomplishment of being the first IU team in a decade to earn a berth.  The lack of satisfaction was interesting and may be a portend of positive things to come.

Bonus – Confidence seems to fit this time around.  Last year, when defensive lineman Darius Latham claimed the Hoosiers goal was to play in the National Championship Game, I wanted to check his vital signs to make sure he hadn’t lapsed into a fever-driven psychosis.  When players spoke of goals this year – like winning the Big Ten – somehow it fit.  I’m not saying they have a chance to beat Ohio State, Michigan, and Michigan State for the Big Ten East crown, but hearing it today didn’t make me worry for anyone’s health.  The players sounded reasonable and confident – two words that haven’t fit well in the same sentence for Indiana Football since the halcyon days of the Bo McMillan era.