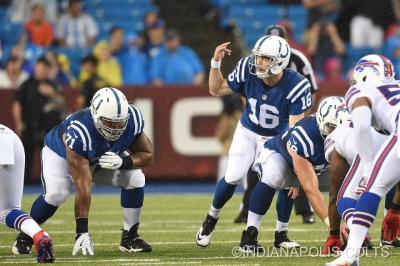 Scott Tolzien motions to a receiver during the Colts utterly meaningless win in Buffalo Saturday night.

The Indianapolis Colts won their first preseason game 19-18 over the Buffalo Bills, and if you felt better (or worse) about the Colts chances to enjoy a fruitful 2016 because of that result, you are a moron.

You can enjoy the game as a positive alternative to losing, but preseason wins are meaningless, and so is most of the activity in them.

Andrew Luck didn’t play, and that is a good thing because he would be no more ready today than last Friday because of a half dozen reps, and during one of those reps he might have suffered an injury.

There is a reason skill position starters play very little in the first preseason game – even when it should have been the second.

Two Colts are in midseason form after the first preseason game – punter Pat McAfee and tweeter/owner Jim Irsay.  The rest will find a way to be ready on September 11th against Detroit.

Here are the top eight takeaways from Saturday night’s action:

8 – Preseason is too long for everyone but the owners.  The only purpose these games serve is to fatten owners’ wallets.  There is no need for four full exhibition games to prepare for the season.  Better work could be done during controlled scrimmages, but fans won’t pay full price to watch.  Sadly, the answer to almost every question where logic seems to take a holiday – as with why is the NFL preseason four games long? – is MONEY.

7 – Colts running game not dynamic.  Whether or not Frank Gore being a part of the attack was a big deal in Buffalo is debatable, but the stats for the Colts on the ground were awful.  They ran the ball 23 times and gained 30 yards.  If that is indicative of the Colts rushing efficiency during the regular season, pessimism in the national media about this Colts team will be rewarded.

6 – Pat McAfee doesn’t need preseason at all.  Despite an aberrational block, the Boomstick showed himself to be in midseason form in Buffalo as he averaged 58.6 yards on five punts.  Michael Palardy – the soon to be axed other punter – wasn’t bad either as he averaged just over 45 ypp.  The net wasn’t bad as four of the punts were returned for 28 yards, and two resulted in touchbacks.  The Colts aren’t likely to win a Super Bowl because of punting, but they sure won’t lose any games because of McAfee.

5 – Season is over if Andrew Luck gets hurt.  This is true for most teams in the NFL, but on few teams is the gap between starter and backup wider than with the Colts.  Luck is the highest paid player in NFL history, while backup Scott Tolzien is pedestrian in every sense.  Sitting Luck in the first preseason game appeared to some as a soft move by the Colts, but the risk far outweighed the reward.

4 – Game will not be remembered in four weeks.  The Colts won 19-18 as the Bills chose to go for two with no time remaining rather than force overtime.  That was the sane choice by a sane Rex Ryan who appreciates the lack of value preseason wins represent.  When the Colts were rolling from 1999-2010, do you remember their preseason record?  Of course not, but it sucked. Preseason wins are a pathetic predictor of regular season success.  If the Bills had converted, would the Bills be better or the Colts worse?  Nope.

3 – Sio Moore’s hamstring injury is not a season changer.  One of the positives of employing mediocrity is that replacing it is simple.  Nothing against Moore, but he does not have a skill set that is unique.  If the hamstring is only tweaked, the Colts won’t have to expend much energy searching for another inside linebacker because he should be good to go by the opener.  If the hammy is shredded, GM Ryan Grigson will need to find one of the many ILBs who will be cut as preseason rolls on.

2 – Luck doesn’t need five (or four – or three) preseason games to be ready.  If Luck had played, how many snaps would he have taken?  Three?  Five?  That’s not meaningful prep for an NFL regular season.  Colts fans upset with the decision to sit Luck need to take a deep breath and understand that while you pay full price to watch preseason football, Luck doesn’t get paid until the regular season starts.

1 – Jim Irsay needs to keep tweeting.  Irsay owns the team, so he can do whatever the hell he likes in the locker room, press box, or on Twitter, and he should.  Rex Ryan took umbrage when he heard about Irsay’s tweet.  So what!  Here are Irsay’s tweets from Saturday night announcing Luck as a spectator, “Colts Fans; it’s a long Pre-Season and 2 Home Games are coming in the next 2 Weeks..Look for #12 to make 1st Start then instead of tonight … Yes,there is some truth on this dark,rainy night; that my good friend Rex…has never heard of the word…. PRESEASON

Ryan doesn’t like it.  Tough tomatoes!  So what.  Pagano has to answer questions about the owner correctly assessing the importance of the night?  So what again.  Nobody cares about this silly sidebar but the knuckleheads looking for something inane to carp about as we look ahead to week two of meaningless football.