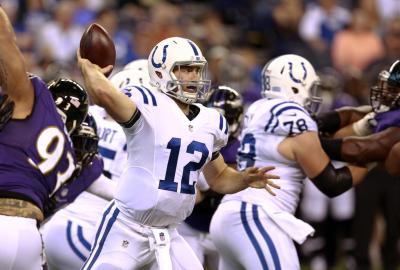 Guess who is the #1 player to watch this weekend against the Eagles?

In four weeks, no one will remember the Indianapolis Colts lost 19-18 to the Baltimore Ravens at Lucas Oil Stadium Saturday night, but that doesn’t mean we shouldn’t watch preseason football.

There are jobs at stake with every snap, which makes the preseason dramatic but in a much different way than the regular season.

Through two games – and a cancelled third – some obvious storylines have developed as the Colts prep for a season that will either prove their 8-8 record in 2015 was a fluke as the Colts return to the playoffs or a trend south as bad drafts and misguided free agent signings have taken their toll.

Here are the 10 players to watch through the rest of the preseason:

10 – Hugh Thornton, RG.  An ankle injury has kept Thornton off the field for the first two games of the preseason, but he is going to have to heal quick to earn a roster spot in his fourth year out of Illinois.  A prototypical guard, Thornton has found it difficult to stay on the field for an extended period of time after being selected in the third round of the 2013 Draft – a draft class he alone represents for the Colts.  If he is cut, that entire class will have washed out.  I’m not sure any draft class in NFL history has vanished this quickly.

9 – Josh McNary, LB.  Likely a special teams guy, McNary looks explosive with the twos and threes this preseason.  His road to success with the Colts was nearly derailed because of a rape arrest.  After his acquittal, McNary kept his head down and worked his way back onto the roster and into a position now where he might be able to contribute in a meaningful way.

8 – Chester Rogers, WR.  Through two preseason games, Rogers has seven catches for 93 yards, and looks like a lock to make the squad as an undrafted free agent out of Grambling.  I keep waiting to see why Rogers went undrafted, and that answer hasn’t come yet.  Good speed, good hands, good routes…what’s not to like?  And he was a very solid return guy in college.

7 – Stephen Morris/Scott Tolzien, QB.  If Luck goes down, which of these two is next up, and does it matter?  Both Morris and Tolzien played well Saturday night, but the drop from #12 to either #7 or #16 will likely be fatal for the Colts playoff hopes if the relief is needed for a prolonged period.  The upside appears to be higher for Morris because of his foot speed, but Tolzien might be a steadier hand.  Every rep is huge for both these guys.

6 – Erik Swoope, TE.  A very good college basketball player at The U, Swoope is trying to be the latest hoopster to make the jump to the NFL as a tight end.  He’s very athletic, and while we love Cathedral product Jack Doyle, if Dwayne Allen gets dinged up, the Colts are going to need a similarly talented dual threat at that spot.  Swoope played well against the Ravens, and looked very comfortable.

5 – Denzelle Good, RG.  No fan watches the right guard but his family, but Good’s ability to slide to that spot is critical to the Colts keeping Luck upright through 16 regular season games.  Defensive coordinators are going to salivate at the thought of attacking a second year seventh rounder out of Mars Hill who has never played guard before.  We’ll see if Good is up to the challenge.  So far, so…well…good.

4 – Antonio Morrison, ILB.  No offense to Nate Irving, Sio Moore, or D’Qwell Jackson, but the Colts have placeholders not playmakers at inside linebacker.  They are competent, but incapable of dominating at their position.  Morrison has a skill set to be a little more special than the others, and a hunger to hit that was obvious while watching the preseason game against the Ravens.  Morrison is the key to the 2016 Colts draft class.

3 – Robert Turbin/Josh Ferguson, RB.  Frank Gore is 33, and that means that the Colts are going to monitor his use to ensure he stays fresh into December.  Turbin and/or Ferguson are going to have to carry some of the running game weight as the Colts try to take some pressure off Luck with a capable running attack.  Which or both will be decided in the next 11 days.

2 – T.Y. McGill, DL.  The Colts lead the NFL in T.Y.s with two, and the second best known is blossoming into a play-making defensive lineman.  If Kendall Langford’s convalescence keeps him on the shelf for any period of time during the regular season, McGill might get the opportunity to establish himself as an indispensable part of the defense.  McGill has what coaches call “twitch”, which is best described as quickness despite girth.  Twitch causes problems for offensive linemen.

1 – Andrew Luck, QB.  Any list regarding players who will determine whether the Colts return to the playoffs will have Luck as the #1 entry.  He is not only the most important Colt, he is the most important player to his team in the NFL.  And as the highest paid player, he should be the most important.  Luck’s first action against the Ravens Saturday night was very solid.  The play calling protected him nicely, and he slid twice while completing all eight of his passes.  If Luck can be more consistent early, he won’t need to be so spectacular late – and the need to be spectacular can get Luck hurt.  His last action of the preseason will be this Saturday for a little more than a half, so get to Lucas Oil early Saturday night.