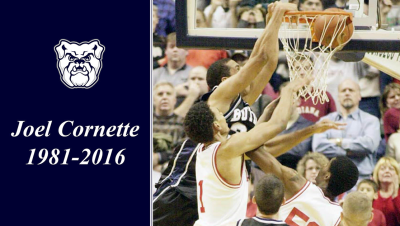 Butler remembered and celebrated Joel Cornette yesterday, but it will never say goodbye.

Yesterday, Butler University hosted a celebration for the life and legacy of former basketball player Joel Cornette.  It was attended by a couple thousand of his closest friends.

There were 13 speakers, and all told different versions of the same story.  Passionate teammate whose level of belief in friends led to their rising to meet challenges on the court and off.  Big personality who didn’t wait for an invitation to debate, amuse, or comfort.  Caring teammate who showed up again and again when chips were down.  Wonderful man friends trusted with their children.

People almost never say anything bad about a guy during a service to memorialize him, but the uniform and effusive positiveness related about Cornette was unique.  Joel Cornette was quite evidently a very good man whose life touched virtually all he met – from elementary school to St. Xavier in Cincinnati to Butler to Priority Sports.

Here are the top 10 things we learned about and from Joel Cornette during the celebration of his life:

10 – Great players aren’t always born that way.  Cornette was the 16th player on a 16-man roster as a freshman in high school, according to his best friend.  Hard work, an endless reservoir of faith, and a series of growth spurts put Cornette in a position to earn a scholarship at Butler.  From there, Cornette and his teammates kicked open the door that stood between the Bulldogs and national prominence through the force of their will and friendship.

9 – College teammates are friends forever.  As four teammates extolled the virtues of their fallen brother, another 20 or so stood behind them to offer their support.  They flew in from all over the world to share that space with one another and pay tribute to a man each considered a close friend.  Other than the military, there is no level of camaraderie greater than that created by the shared sacrifice and accomplishment of collegiate athletes.

8 – Being tall gets you into clubs in Vegas.  One of Cornette’s co-workers from Priority Sports told a great story about Cornette annually posing as an NBA Summer League player to gain VIP access to a club.  The story ended with Brad Stevens offering Cornette a jersey so he could sit on the end of the bench for the Celtics to turn his lie into a truth.  The story showed Cornette’s sense of mischief, humor, and thirst for fun.

7 – Continuity is key.  Sitting among the mourners were Barry Collier, Thad Matta, Todd Lickliter, Brad Stevens, and Chris Holtmann.  While there has been coaching turnover driven by success at Butler, there has always been an orderly line of succession that respected and honored “the Butler Way”.  At many other schools, you would never be able to get former coaches to share the same space.  Butler is different in that once you are part of the Butler Family, you are always part of the Butler Family.

6 – “The Butler Way” works because of players like Cornette.  A cultural and schematic bible is a wonderful tool to share with players, but without their buy-in, it’s just paper and ink.  Players like Cornette who embrace and reflect a set of principles give life to a lofty ideal like “the Butler Way”.  Everyone with Butler ties who spoke at Cornette’s celebration agreed that without him believing that playing for a National Championship was possible between 1999-2003 when he played, it couldn’t have happened in 2010 and 2011.

5 – Great parents, great kids.  Throughout the nearly three-hour celebration, so many extolled the virtues of Joel Sr. and Christi Cornette, it became obvious that Joel was both literally and spiritually their creation.  Inattentive, abusive, or absent parents don’t always produce wayward kids, but great parents who put their children’s needs ahead of their own almost always wind up with great kids.  It’s clear that Joel Sr. and Christi imbued Joel Jr. with the endless loyalty and belief in others that was his hallmark at Butler and in adulthood.

4 – Our limits are self-imposed.  When coach Todd Lickliter listed the goals for his Butler team one year while Joel played for him, the final entry was a trip to the Sweet Sixteen.  Joel, according to multiple stories yesterday, picked up a marker and wrote beneath it, “win the National Championship”.  That was the first acknowledgement that such a thing might be possible at Butler, and it changed the program from one that wanted to play with the big boys into one that demanded they be beaten.

3 – Life is about showing up.  Whenever teammates and friends were in need, Cornette showed up – repeatedly.  He didn’t ask for permission to be a good friend; he just did it.  That should be a lesson for all of us.

2 – Be yourself from the jump.  People became comfortable with Cornette almost immediately because he was never anyone other than 100% Joel Cornette.  He represented his feelings and opinions fearlessly, and shared his friendship without reservation from the moment he met others.  That seems a time-saving behavior over getting a sense of the room and tiptoeing toward candor.

1 – Life is better when surrounded by people who know the whole is greater than the individual. Self-centered and self-serving people suck the life out of businesses and rooms.  Those who passionately care about the well-being of others make great managers, friends, and employees. Hire those who care about the collective more than their own selfish needs, and your business has a chance to do great things.  Embrace friends about whom you care more than yourself, and life becomes a daily devotion to others.  That’s what Joel Cornette did, and for it he will always be loved.