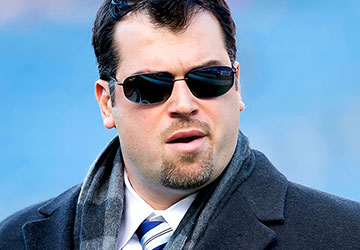 Ryan Grigson hopes the roster he has put together will be ready on September 11th.

The Philadelphia Eagles are not a great football team, and their quarterback has never led a team to a winning record.  They beat the Indianapolis Colts handily 33-23, and it wasn’t that close.  In the process, the Colts made Sam Bradford look like Tom Brady.

While your eyes told you the Colts suck, it’s important to continue to remind ourselves that the Colts 2016 record still sits at 0-0, the same as everyone else in the NFL.

Don’t get me wrong, there are plenty of reasons to worry – which may or may not be corrected by kickoff in the opener against the Detroit Lions.

Plugging as many holes as were displayed Saturday night is not going to be easy, but why focus on those until we have to?

How about the positives!  There were several, and I’m going to do my best to find 10 because that is the basic conceit of this daily post.

9 – Jack Mewhort is out for only 2-4 weeks.  The Colts don’t need their already wobbly offensive line weakened further, so hearing that Mewhort will be back with relative dispatch was good news.  Hopefully, right tackle Joe Reitz will be back for the opener against the Lions.  Le’Raven Clark needs a little seasoning, or it sure looked that way Saturday night, so Reitz coming back will be a big deal.

8 – All Colts stood for the National Anthem.  Colin Kaepernick’s tone deaf protest against racial inequities was not repeated at Lucas Oil Stadium, and that’s a positive.  Racial issues require our vigilance and outrage, but to not stand during a song that honors the sacrifices of current and past military members and their families is absurd.  There are plenty of reasonable forums for expressing outrage, but sitting during the National Anthem is offensive to veterans and their families.

7 – Starting wide receivers looked ready.  T.Y. Hilton, Donte Moncrief, and Phillip Dorsett combined to catch 12 balls for 145 yards.  If the Colts offense sputters during the regular season, it won’t be because the wide receivers aren’t any good.

6 – Backup QB Stephen Morris looked like a game changer for third straight week.  I know that Morris is playing against defensive guys who will be on the street a week from today, but against the Eagles he again made the game look easy.  He completed 7-of-11 passes for 144 yards and a TD.  His passer rating was a gaudy 137.5.  Colts fans hope and pray Morris never sees action, unless at the end of a blowout win, but it’s fun to watch a quarterback succeed without fearing for his safety.

5 – Frank Gore is going to get better as he gets more work.  This entry is more about hope than reality.  All we know is what we see, and Saturday night Gore had trouble finding a hole to squeeze through.  Gore had four carries for six yards, and whether he is 33 or 53, he is going to average more than 1.5 yards per carry this season.  Hopefully, the offense is able to stretch the defense during the regular season in a way that allows the offensive line to open holes.  The Eagles putting seven and eight in the box dared the Colts to throw deep, exposing Luck to serious heat.  The Colts declined to answer that dare.

4 – Antonio Morrison looked good again.  I’m not sure at what level rookie ILB Morrison grasps his responsibility in every scheme, but if the Colts are looking for a linebacker who sees ball, hits ball, they have their man.  Morrison closes quickly and hits violently.  Like Morris, Morrison isn’t going up against the ones, but that day may come sooner rather than later.

3 – Six of the Colts top seven cornerbacks sat on Saturday.  Sure, the Colts cornerbacks were terrible against Bradford and his Eagles receivers, but at least none of them are expected to play during the regular season.  Vontae Davis, Antonio Cromartie, and Patrick Robinson will be ready at some point.  Jalil Brown is on the mend, and Darius Butler has a soon-to–be okay ankle.

2 – Backup QB Stephen Morris didn’t lead Colts in rushing.  For the first two preseason games, Morris led the Colts ground game in yards.  Against the Eagles, Robert Turbin – a running back – was the leader with 24 yards on four carries.  The bad news is that minus Turbin’s efforts, the Colts ran the ball 14 times for a grand total of 15 yards.

1 – Andrew Luck looks good.  All Colts lists must end with a mention of Andrew Luck.  He is, by far, the most important component of the Colts drive to return to the playoffs.  In the preseason, Luck is 21-26 for 205 yards, and no TDs nor interceptions.  Luck was sacked three times against the Eagles as none of the five starting offensive linemen acquitted themselves well as the Jim Schwartz led Eagles stacked the box, which made blocking difficult.