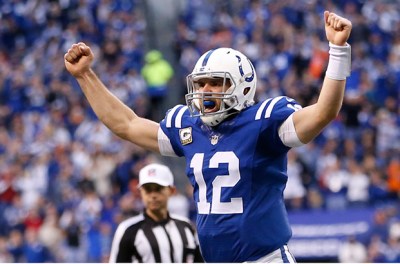 August 30th is way too early to be relentlessly cynical about the 2016 Indianapolis Colts.

An NFL season is broken into quarters, and even a bad first quarter is too early to cast an entire season into the scrap heap.

There is no doubt these Colts are a bit different from most of those Colts teams who have posted only one losing season since 2001, but until the season starts and players hit to win rather than prepare we can’t know for certain what might happen.

Injuries have taken a toll and brought question to positions that were believed to be areas of strength – like cornerback where Vontae Davis is expected to miss at least the first two games of the regular season.

Nine hits to the once again healthy physique of quarterback Andrew Luck in the first half of the Saturday’s preseason game against the Philadelphia Eagles cast doubt about his ability to survive that level of beating for an entire season.

Sure, there are reasons to feel a little foolish for believing the Colts will find a way to the Super Bowl – or even the playoffs – but finding a reason to have faith is what we do in August.

Here are to top nine potential, but very likely fictional, narratives that would validate genuine optimism for the 2016 Indianapolis Colts:

9 – Hysteria in coaches meeting causes schematic replate.  During a postseason wrap-up with media, Chuck Pagano confirmed rumors that mayhem during an early September meeting led to a change in focus and scheme that propelled the Colts to an astonishing turnaround.  During that meeting, new defensive coordinator Ted Monachino drew up the innovative “98” defense for the very first time.  Experts claim the deployment of Robert Mathis in a position never before conceived will forever change football.

8 – Chud takes offense vertical with T.Y. Hilton catching 80 balls and averaging 18 yards per.  While fans sweated a meaningless preseason of dinking and dunking to keep Andrew Luck upright, offensive coordinator Rob Chudzinski waited to unveil a vertical passing game that confounded defenses and stunned analysts.  Hilton responded with the most productive season of his five-year career with 1,440 yards and 15 touchdowns..

7 – Foundering in preseason causes frenetic work by players leading to mass improvement.  Fear of doom was a powerful motivator as the Colts careened through a preseason that set a new standard for uninspired play.  Each of the 53 roster survivors spent significant time staring in the mirror and realized that a different level of aggression is needed to play winning football.  A furious rally against the Lions in the opener set a tone that never changed.

6 – Frank Gore becomes first running back his age since John Riggins to run for 1,000 yards.  Defying age and worries about an offensive line that appeared to have difficulty generating enough push to consistently create a hole, Gore found enough creases to use his 225 carries to notch 1,012 yards and earn an invitation to his first Pro Bowl since 2013, which he declined because of the Colts trip to the Super Bowl.

5 – Offensive line congeals just in time to save Andrew Luck’s life.  The porous unit that allowed the Eagles to rain down blows on their quarterback began playing like a unit against the Detroit Lions in the opener, and just kept rolling, allowing opponents to sack Luck only 10 times.  As a result, Luck was able to do what he does best – throw the deep ball to the speediest trio of wide receivers in the NFL.  “The Five Blocks of Granite” – Castonzo, Mewhort, Kelly, Good, and Reitz are now among the finest units in the nearly century long history of the NFL.

4 – Importance of preseason is vastly overrated and the Colts find a way to win AFC South.  All the doubts caused by a singularly difficult to watch preseason were entirely unfounded as the Colts played with crisp aggression from the opener against the Lions through the regular season into the playoffs.

3 – August injuries lead to December health.  The Colts injury issues were at their worst as the regular season started and only improved from there.  Every starter who returned was able to finish the season on the field, and a miraculous recovery by left guard Jack Mewhort allowed the starting offensive line to play together intact through all 16 games.

2 – Robert Mathis returns as a rampaging beast at age 35.  Mathis continues to defy age and a recent spate of injuries by matching his 19.5 sacks total of 2013.  His strip sack against Tom Brady in the AFC Championship was the deciding play in an AFC Championship Game for the ages.

1 – Andrew Luck proves incredible play of quarterback can trump mediocrity everywhere else.  The greatest season played by a quarterback in NFL history led the Indianapolis Colts to a third Super Bowl in the last 11 years.  Luck was virtually untouched while completing an NFL record 56 touchdown passes and running for another seven as the Colts set the bar for explosive offense in a championship season Colts fans will forever remember.