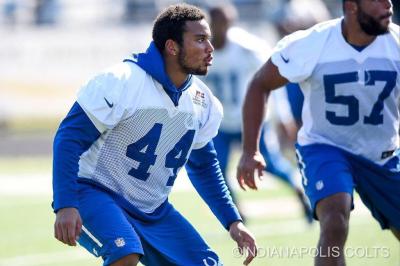 Antonio Morrison and Josh McNary will be worth watching tonight as the Colts take on the Cincinnati Bengals.

The Colts and Hoosiers play simultaneously tonight, so DVRs all over central Indiana will be busy – as will sports bars for fans and gamblers who can keep an eye on each game simultaneously.

Sane people know that betting on any preseason NFL game is a chump move, and that betting on the fourth preseason game is as clear an indication of gambling addiction as any, but even without dollars on the line, tonight’s action will be worth your attention because as hard as drama might be to find in Cincinnati and at Florida International, it will be there.

The Colts vs. Bengals game is little more than a job fair for end-of-the-roster talent that might be able to wrestle a job offer from an impressed NFL general manager.  Sounds a lot like “American Idol”, doesn’t it?  That show, when it was good, drew historic audiences.  This game, like Idol, will be interesting, if you know where to look.

When Indiana plays Florida International, a tall stack of Hoosier chips will be in the middle of the table.  With a Big Ten East schedule that includes Ohio State, Michigan, and Michigan State among others, the Hoosiers cannot afford a non-conference misstep if they are to earn a second consecutive bowl berth for the first time in a generation.

Here are the 10 storylines that will keep my attention riveted on two TVs tonight:

10 – Will any of the back-up offensive linemen earn money on Sundays?  To you, they are #70, #77, and #79.  To their families and friends, they are Kitt O’Brien, jeremy Vujnovich, and Mitchell Van Dyk – large men with a dream.  They have quietly gone about their business through camp and the preseason as Colts offensive linemen.  They play in the second half of preseason games, and it is widely assumed they will be told to bring their playbook to Chuck Pagano’s office this weekend as the Colts cut the roster to 53.  Maybe they catch on as practice squad members.  Maybe they play next for an arena league team.  Maybe they are forced to abandon their dream and go to work for a living.  Tonight will give each a chance to make their cases that they belong.

9 – Can IU stop anyone?  The Hoosiers defense has been porous for a generation, and that sad but consistent reality might be about to change.  The inexperienced secondary, so brutal last year, is a year older.  Depth has improved.  There is a new defensive coordinator who brings strong talk.  There is a lot to inspire uncharacteristic optimism about the Hoosiers defense.  There is irrefutable history that justifies grave doubt.

8 – Did Le’Raven Clark learn anything last week?  Lessons learned in front of 70,000 fans while trying and failing to protect the highest paid player in the history of the NFL will either stick or absolutely crush a player’s confidence.  We will see which tonight as Clark gets his first reps since a parcel of Eagles defensive linemen led by Fletcher Cox exposed Clark as a work in progress.

7 – Can Devine Redding become the first Hoosiers running back since 1991 to post back-to-back 1,000 yard seasons.  When Jordan Howard nursed an injury last season, Redding slashed and gashed opponents for 1,012 yards.  Howard has moved on to the NFL, so it’s Redding’s turn to run the ball as the Hoosiers primary back.  He doesn’t have former Hoosier Tevin Coleman’s breakaway speed or Howard’s power, but he is shifty, tough to bring down, and running behind a very strong offensive line.

6 – Can any healthy and able Colts cornerback cover somebody?  Last Saturday night, one of the most mediocre quarterbacks in the NFL looked like Dan Marino as the Colts lack of pressure exposed cornerbacks incapable of covering moderately talented receivers for more than three seconds.  Is there a spot with the Colts for Tevin Mitchel, Christopher Milton, Tay Glover-Wright, or Frankie Williams?  And if not good enough to play for the Colts in week one, then for whom might they play?  Tonight is big for the Colts corners.

5 – Is veteran running back Stevan Ridley more able to backup Frank Gore and Robert Turbin than rookie Josh Ferguson?  Four years ago, Ridley led the New England Patriots in rushing with 1,263 yards, so we know his body was once capable of productivity, but four years is a long time, and after running for 430 yards the last two seasons and being cut by the Detroit Lions a week ago, this appears to be a bit of a hail mary for the Colts as they search for a third running back.

4 – Can Richard Lagow play winning Big Ten football?  Lagow throws a great ball with excellent timing and accuracy – in practice.  He was rated the top junior college quarterback in America last year.  Starting tonight, Lagow needs to show what he can do when playing for a Big Ten team.  Succeeding Nate Sudfeld won’t be easy, but Lagow passes the eye test.  Despite wearing #21, Lagow looks and acts like a quarterback.  We’ll see tonight if he IS a quarterback.

3 – Does Stephen Morris project as a better Colts backup QB than Scott Tolzien?  Speaking of guys who just appear to be very comfortable as a quarterback, Morris has been a bit of a revelation late in games for the Colts this preseason.  He throws an easy and accurate ball, and can get first downs with his feet.  Given the choice between Morris and Tolzien if Luck goes down, based upon the first three games in the preseason, I take Morris.  We’ll see what Morris and Tolzien look like tonight.

2 – Will Indiana’s defense be as aggressive as promised?  When I spent a few minutes with Indiana’s new defensive coordinator Tom Allen on National Signing Day, I walked away looking for someone to hit.  He has a personality that inspires aggressive thinking, and we’ll see if his defense looks a little more eager to stop somebody.  It’s been a long time since an Indiana defense punished an offense for showing the temerity to try to score against it.  Maybe a new era starts tonight.

1 – Do Antonio Morrison and Josh McNary look like starting linebackers?  The inside linebackers for the Colts tend to be seen as placeholders, not playmakers, but during the preseason they have played against the ones on offense.  Morrison and McNary fly around making plays late in preseason games against other backups.  As you watch the game tonight, focus a little bit on #57 (McNary) and #44 (Morrison).  To the extent you can, try to project them on to the field against the starters for the Lions.  I don’t know whether they are ready or not, but they might earn an opportunity to make plays in 10 days based on what they do tonight.