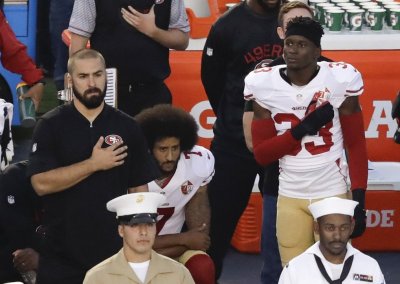 Colin Kaepernick kneels during the National Anthem prior to last night’s game.

San Francisco 49ers quarterback Colin Kaepernick knelt rather than stand during the National Anthem prior to the preseason game between his 49ers and San Diego Chargers last night.

So we are left again to discuss the intent and result of Kaepernick’s mode of protest.

There are those who feel Kaepernick is right to choose not to honor a song that celebrates slavery during its third verse.  Others see it as a slap in the face of the military.  Still more want to talk about Kaepernick’s motive rather than the form of his protest.  Some are actually talking about racism.

Kaepernick is trying to mollify critics by pledging to donate $1-million to organizations dedicated to finding justice for black victims of violence and by kneeling rather than sitting – as though kneeling conveys as lesser level of disrespect to those who hear the National Anthem as a sacred pledge of love for their country.

Unfortunately, the problem of racism will not be cured as easily as Kaepernick or anyone else would like.  Reductive reasoning, a thought process at which we as Americans are particularly adept, does not allow for a solution that can be enacted because a man kneels, sits, marches, votes, or writes.

The problem can only be solved through the type of empathy gained by engaging in extensive and intense conversation – the kind of talks that either wear us out or bore us.  Listen to our presidential candidates talk about one another, and tell me we are ready to listen to a nuanced and reasonable discussion of a societal ill as complicated as race in America.

Add the role of police in our society to the issue of racism, and all of a sudden the common area in our unique perspectives is limited to almost none.

Here are seven truths of the Kaepernick protest we need to embrace in order to move forward toward a solution he is trying to solve:

7 – DeMarcus Cousins’ event tomorrow should be getting more media play than Kaepernick’s protest.  Cousins is roundly criticized for what many basketball fans see as a selfish and ill-tempered mindset as he plays for the Sacramento Kings.  What he is doing tomorrow in his hometown of Mobile, Alabama, is the kind of forward thinking and reasonable corrective event that might actually lead somewhere productive.  Cousins is sponsoring “Break the Silence, Build the Trust,” a discussion between civic leaders and the Mobile police so both sides can understand the challenges of working in law enforcement and living as an African-American.

6 – The racial divide in America is closing far too slowly.  We are too far from seeing one another for the good we bring to society rather than what we look like.  That’s been true for centuries.  The wisdom necessary to empathize and embrace rather than shun and disparage is lacking in so many, a post-race America is nearly impossible to imagine.  Finding reasons to suspect and fear one another seems to be a skill we are unable to shun.

4 – Kaepernick’s protest has little in common with Muhammad Ali’s.  Ali refused induction via a classist draft into a corrupt war that was driven more by politics and economics than the security of the United States.  He exerted a legal claim as a conscientious objector that the country refused to grant until he won an appeal to the United States Supreme Court.  Because of his refusal to answer the call to serve, Ali forfeited three years of his career and millions of dollars.  Kaepernick has forfeited nothing.  Ali took a stand against a legislated societal wrong.  Kaepernick sits/kneels during an anthem.

3 – Police are in relentless danger from the mentally ill.  Every time a policeman is called to the scene of a crime, there is a reasonable likelihood he or she will face situation caused by a mentally ill person who is incapable of understanding the consequences of his or her actions.  The police are trained to defend themselves – and those around them.  That sometimes requires snap judgments that result in the loss of life.  Mistakes are made.  There is no question that unarmed blacks are victims of these incidents disproportionately, and that understanding and training are needed to prevent unnecessary deaths.  It would also do many of us some good to empathize a bit with the police who enforce our laws as they often deal with those who cannot be reasoned with.

2 – Unarmed blacks are more likely to be killed by police than unarmed whites.  There is oppression in our society driven by racial stereotypes.  Anyone who doesn’t believe that has never enjoyed a conversation of any depth with an African American.  Success comes harder for blacks than whites.  There is an economic reality in play that drives some of that inequity, but much of it is because many tend to favor those who look like them and suspect those who don’t.