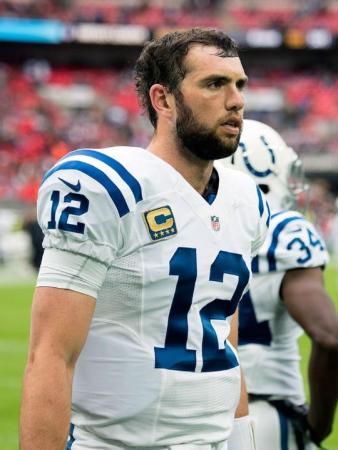 Andrew Luck had a good day, but not good enough to bring a winner back to Indy from London.

The Indianapolis Colts lost today in a battle between teams that – to be kind – aren’t so good.

Blake Bortles didn’t turn the ball over, and the myriad of penalties committed by the Jacksonville Jaguars weren’t enough to tip the scales toward the Colts.

A late push gave the game and the Colts a little life, but the Colts just couldn’t get over the hump in this 30-27 debacle.

The first half was so dull British Prime Minister Theresa May introduced a measure before Parliament seeking the censure of the United States as a hostile nation for the series of awful games foisted upon England by NFL commissioner Roger Goodell.

Well, maybe that didn’t happen, but for those who invested in travel, hotel, and tickets, that hideous first half did nothing to justify their investment.  This was a first half unworthy of a walk across the street, much less a flight across the Atlantic Ocean.

Drops and a tipped pass that resulted in a pick ruined an otherwise good day for Luck, who thrives when the tempo is pressed and his ability to improvise is exploited.  One thing Andrew Luck is not is a game manager, but that was exactly what he was asked to be early in this game – as is so often the case.

Luck completed 27-42 passes for 234 yards, two TDs, and that lone freaky interception.  The most troubling number on Luck’s stat line is six.  That’s how many times he was sacked.  On top of the sacks, he was hit a total of 13 times.

With Luck, the Colts are a wobbly 1-3.  If he succumbs to the relentless pounding and Scott Tolzien is asked to lead the offense, the tent can be folded, soaked in kerosene, and burned.

Injuries like those to right tackle Joe Reitz and left guard Denzell Good play a role in the Colts woes, but every team loses talented players.  The Patriots lost two hall of famers in Tom Brady and Rob Gronkowski to suspension and injury respectively, and Rob Ninkovich has been shelved as well.  Back-up QB Jimmy Garropolo went down too.  They are a dominant 3-0.

Trips to London are weird.  Until a team goes through the travel, players and coaches have no idea how to do it exactly right so a team plays at its best.  Hard to see how the travel might have caused a loss to one of the worst teams in the NFL.

One of the few bright spots was Frank Gore, who continues to defy age, completing the first quarter of the season with 253 rushing yards.  That puts him on pace to be the oldest back in more than 30 years to eclipse the 1,000 yard mark.

The only question worth asking now is whether that light at the end of the tunnel indicates a prosperous emergence from the dark or an oncoming train.  The answer will come in due time over 12 of the next 13 weeks, but there are few indicators that the Colts will rebound from this slow start to finish the season with a playoff berth.

It appears the Colts are mediocre at best in virtually every respect.  The coaching staff is resistant to take away what offenses do best, and the ongoing insistence that Luck must manage a game rather than attack it seems a half measure arrogant and the other half hyper-cautious.

Receivers drop passes, defenders miss tackles, and other than special teams, the Colts are generally the lesser team.

Regardless of whether the bigger problem is the players gathered by general manager Ryan Grigson or how they are deployed by coach Chuck Pagano, (perhaps a miserable combination of the two), the sad truth is that the Colts are just not very good right now.

Owner Jim Irsay has a long flight ahead of him.  That should give him all the quiet time he needs to contemplate the direction of his franchise, and how or whether it might be adjusted.

But in the NFL, good news is only seven days away.  Maybe next week something clicks as the Chicago Bears visit.  Hope lives in Indianapolis, even if the justification for it is difficult to see.