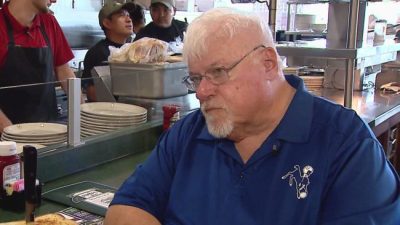 Bob Lamey crossed a line that a responsible broadcaster cannot cross, and he doesn’t remember it.

Indianapolis Colts radio voice Bob Lamey turned loose an expletive at the end of the team’s win against the San Diego Chargers that is an absolute no-no for broadcasters.

Bob dropped the big one, or more accurately an odd mutation of the big one with two suffixes that I’ve never heard before.

Yep, Bob threw an f-bomb into a live microphone that funneled through the control boards and transmitters of 45 affiliates licensed by the FCC – an organization dedicated to keeping the airwaves clear of obscene content – and into the ears of thousands of Hoosiers.

The outcry over the lapse in eloquence is more than a tempest in a teapot.  While no one is irreparably damaged by hearing a profane utterance, the fines levied by the FCC can have an adverse effect on the reputation of a broadcaster as well as the careers of innocent employees of the broadcasters who might be fired as a result of the financial reversal caused by the fine.

The Colts decision to accept the Bob’s apology and forgive him is laudable.  Bob’s response after a couple of days to reflect should be to exit stage left and call it a career for the following six reasons (more would be too unpleasant to unload on a former co-worker):

6 – There comes a time for everyone to walk away before they are escorted out.  The Colts gave Bob a pass yesterday because they are a football team, not a broadcast company.  The decision was made to forgive Bob for his massive lapse in judgment because the consequences for the team are insignificant.  The next time, absolution will be more difficult for Bob to earn and the Colts to explain to easily offended fans and justify to affiliates who might be required by the FCC to pay a significant fine. Bob exiting the booth on his own is a moment he has earned.

5 – Bob deserves a spot in the Colts Ring of Honor, not the Broadcasting Hall of Shame.  Putting his own legacy at risk by peppering his commentary with obscenities is not what Bob should be remembered for.  His name should be forever emblazoned among Colts greats at Lucas Oil Stadium to honor the manner in which he brought the excitement of Colts games to millions of Hoosiers since the time they moved from Baltimore to Indy.

4 – Dropping an F-bomb live on-air is grotesquely unprofessional.  There is one very serious line that a broadcaster cannot cross – a threshold of professionalism that must be respected.  That is to never utter the dreaded f-word into a live microphone.  It happens so rarely that Bob’s bizarre lapse is national news.  Annual seminars on obscenity are held in the conference rooms of every radio and TV station in America, and the headline of those seminars seems laughably unnecessary, “Don’t ever drop an f-bomb on-air.  There is no saving you if it happens.”

3 – Bob doesn’t remember doing it.  How can anyone expect an act not to be repeated when the person who committed it doesn’t recall doing it?  Lamey told Bob Kravitz of wthr.com that he needed to be told by Colts assistant director of communications Matt Conti what he said.  That means either that Bob lied to Kravitz or that he cannot be expected to consciously control his words.  Either should disqualify him in his own mind from continuing to describe Colts football action into a live microphone.

2 – Bob’s legacy deserves better than this.  For decades, Bob’s voice has been synonymous with the Colts.  He is beloved by Colts fans for riding the same roller coaster of emotions they do.  One lapse in judgment won’t define him, but a second or third would, and if it happened once to a broadcaster who knows better – and has known better for 50 years – he shouldn’t trust that it won’t happen again.

1 – The jobs of broadcasters may be lost if he doesn’t.  There are 45 affiliates in the Colts Radio Network, and each has agreed to broadcast under a set of rules established and administered by the FCC.  In order to enforce rules, the FCC has the ability to impose a fine of $325,000 per incident of obscenity or profanity.  The F-word is forbidden, especially from those who should be expected to know better.  The Colts Radio Network is not responsible for the maintenance of the radio station licenses – the affiliates are.  If fines are levied against affiliates, the answer from stations will be to find efficiencies that cover the loss.  That can mean the elimination of jobs.  Lamey’s exit from broadcasting shouldn’t be marked by jobs of young professionals being lost.