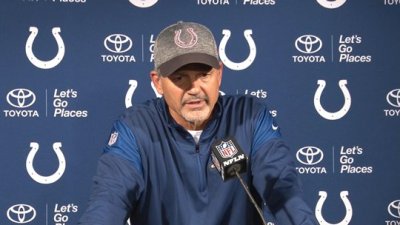 Chuck Pagano talks about what is next for the Colts after a brutal loss to the Texans.

It had to happen eventually – the Colts have become the type of team they used to mock.

For a generation, the Indianapolis Colts were the team that made others pay late.  Extraordinary comebacks were routine.  The rest of the AFC South gritted their teeth as Peyton Manning and Andrew Luck snatched victory from the jaws of defeat again and again.

Now the AFC South rivals are getting even.

Last night’s brutal 26-23 overtime loss dropped the Colts into last place in the AFC South, and that brings to an end a season where hope was a week-to-week indulgence.

Up 14 points with just 2:47 left in the game, the Colts defense wobbled and fell.  The offense shared in the blame by failing to secure the first down that would have allowed them to exhaust what little time remained after the Lamar Miller touchdown that brought the Texans to within seven.

The Colts last night were a little like the Mario Andretti piloted cars that so often dominated the Indianapolis 500 and then broke down eight laps from the checkered flag.  As the 500 is a 200 laps race that doesn’t reward cars and drivers who lead lap 199 but slow to a stop before crossing the yard of bricks, the NFL is only concerned with the score after all 60 minutes are exhausted.

Sadly, this loss that should have been a win has eradicated any hope the team might have invested regarding a return to relevance and a postseason berth.

The Colts are now 2-4, while the Texans are 4-2, the Tennessee Titans won to raise its record to 3-3, and the Jacksonville Jaguars are 2-3.  Add to that the Colts 0-2 record in their division, and the math for earning an AFC South crown gets murky.

After watching this team for six weeks, math is the least of the Colts worries.  The offensive line has moments, but has been mediocre, the pass rush is non-existent, and the only area of excellence exists in the precise and powerful footwork of kick Adam Vinatieri and punter Pat McAfee.

No other group stands out, and unless the 51 positional players on the roster suddenly get faster and more ferocious, this team can’t be expected to beat any of the teams remaining on the schedule.

That doesn’t mean the Colts can’t win again – just that from week to week, they are not likely to.

Let’s get back to the math.  To leap from 2-4 to 9-7 (the worst record that can normally be expected to send a team to the playoffs), the Colts would have to finish the season 7-3.  With games remaining against the Green Bay Packers (3-2), Pittsburgh Steelers (4-2), Minnesota Vikings (5-0), Kansas City Chiefs (3-2), Oakland Raiders (4-2), New York Jets (1-4), Titans (2X), and the Jags and Texans once more each, the Colts will face a team that currently has a losing record twice, a team at .500 twice, and teams with winning records six times.

Given the dearth of talent on the roster, the odds of finding serious enough mojo to climb past all three AFC South rivals is daunting.

The Colts are a flawed team that is suffering because of a roster built with elderly but lovable free agents, a quarterback taken as the obvious #1 overall pick in 2012, and a bunch of guys who were cobbled together to replace the woeful 2013 and 2014 draft classes (only Jack Mewhort and Donte Moncrief remain from either).

What happened last night in Houston was ugly, but that game didn’t just unravel over the final 2:47 and overtime.  It flew apart with bad trades, drafts, and wasted free agent investments over the past three-plus years.

Only good drafts and coy recruiting of free agents can fix this mess, and that is going to take time.

The only moment worth looking forward to will come on January 2nd when owner Jim Irsay decides whether or not the same men responsible for what the Colts have become are the right guys to Build the (new and improved) Monster.

2 thoughts on “Indianapolis Colts 2016 season ends with a whimper, not a bang in ludicrous loss to Texans”