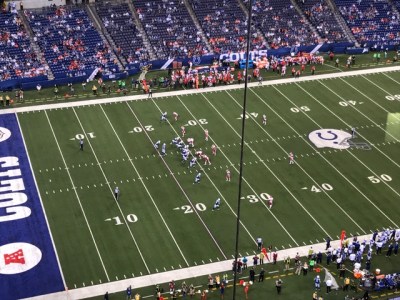 Today’s Colts loss was best viewed from a distance to avoid the stench.

The Colts win ugly, and lose uglier.  Today, they lost the the Kansas City Chiefs 30-14 in a game where the team that backpedalled the slowest won the race – again.

Today’s loss to the Chiefs was virtually without redeeming value.  Turnovers, drops, penalties, and an extended Nick Foles sighting made this yet another game to forget in what is becoming a forgettable season for the Colts

When two mediocre teams battle, turnovers will usually seal the deal, and that’s what caused separation go toward the Chiefs.

Colts QB Andrew Luck effective in spurts, but was victimized again by a horrendous decision that provided the Chiefs a touchdown late in the first half.

With :42 left and the ball at the Colts 29, Luck locked in on Donte Moncrief, who was blanketed by Chiefs DB Phillip Gaines.  The Gaines interception led to a tidy little three play, 36 yard drive that ended with a Jeremy Maclin touchdown catch from soon-to-be concussed Alex Smith.

The game was over at that point with the Chiefs ahead 17-7.

The second half was as ugly as the first, and doesn’t deserve any form of recap.

These things are true about the 3-5 Colts: