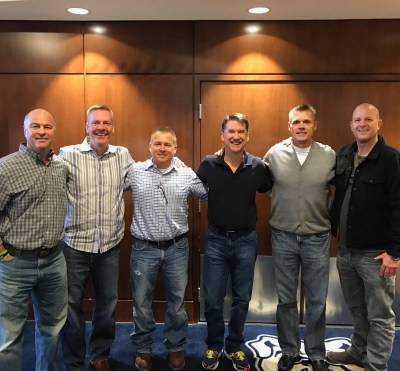 On the worst day, being a sports talk radio host is a lot of fun.  On the great days, it’s magical.

Today is one of those magical days.

The Hickory Huskers are in Indianapolis to be honored tonight at Bankers Life Fieldhouse by the Indiana Pacers as they play the Phoenix Suns, and I spent an hour with them this morning reminiscing about the making of the movie “Hoosiers” and what it means to them 30 years after its release.

I revere “Hoosiers” as the greatest sports movie of all time, and getting a chance to listen to Maris Valainis (Jimmy Chitwood), Wade Schenck (Ollie), Steve Hollar (Rade Butcher), David Neidorf (Everett Flatch), and Brad Long (Buddy) tell stories about the making of the movie was an incredibly fun experience.

That interview aired on CBS Sports 1430, and the obvious vibe from the five members of that mythological 1951 state championship team is that they were every bit the team off the set as they appeared to be on the court.

I felt silly asking them questions, but they were incredibly patient and gracious.  I never get my picture taken with guests, but there was no way I was going to pass that up.

The oddest part of the experience was grasping that I was talking to Wade, Brad, Steve, David, and Maris instead of Ollie, Buddy, Rade, Everett, and Jimmy.

My affinity for the movie and my inevitable emotional response to it are almost embarrassing, and my enjoyment in talking to those five guys was complete.

The best perk of hosting a show is that just because I have a microphone, I get to show up at different places and ask interesting people questions to which I would like answers.

If I had shown up at Hinkle this morning as some awkward guy without a mic flag, I would be viewed as a pest (at best), and asked to leave the premises.  Because I am a radio host, Butler allowed me to use a comfortable room where we could sit while I asked all of the fan boy questions.  No one called security, and everyone answered with good humor.

“Hoosiers” is a wonderful film.  And with five members of the cast, I had a magnificent and unforgettable morning.

Here are a couple of fun facts learned during the interview:

There is more, much more.  Listen today to hear screenwriter Angelo Pizzo at 3:30p, Wade Schenck at 4:45p, and then five Hickory Huskers turn back the clock at 5p on CBS Sports 1430.