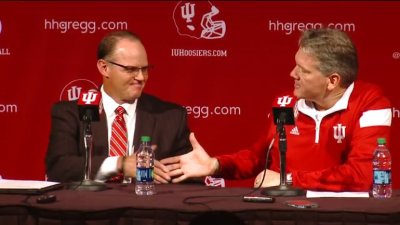 Meet the new boss – not the same at all as the old boss. IU AD Fred Glass welcomes Tom Allen as the next football coach.

Indiana Football coach Kevin Wilson resigned today, and I’m pretty sure he was asked to.

The cost of that resignation?  Exactly $542,000, according to Glass.  At least we assume that quid pro quo.

Mutually agreed to terms of the resignation made the departure quick, easy, and non-litigious.  In the end, it’s worth it to not have the thing drag out as lawyers get paid by the hour to find middle ground in a settlement.

Some 90 minutes after Wilson decided to take the cash and walk, Glass made the call to hire Defensive Coordinator Tom Allen, who led a revitalized unit from abysmal to pretty good virtually overnight, as the permanent replacement (if there is such a thing).

Glass’s press conference announcing all this took place just nine-and-a-half hours after the resignation meeting.  That’s a quick turnaround.  Historically, the only way power has transferred more quickly and with this level of order has been through execution.  Evidently, Wilson’s recent transgressions didn’t rise to the level requiring removal through the use of a guillotine.

I have no problem with either Wilson’s removal or Allen’s promotion.

Glass was very patient during Wilson’s first couple of years as head coach.  There were reports of less-than-coachly behavior from Wilson, and Glass worked hard to lead him toward a place where he would be a solid mentor for student-athletes, not just an innovative offensive football coach.

This was a bit of a surprise, but it’s reasonable to assume that Glass was simply at the end of his patience in trying to help Kevin see whatever light from which he kept shading himself.

Allen is unquestionably a great motivator and solid citizen who will lead his staff and team with loud and enthusiastic love.  He may just be the right guy to get the Hoosiers the rest of the way to consistent respectability in a Big Ten division that might yield three of the four finalists in the upcoming College Football Playoff.

Then again, he might be one of those coaches best served in the hands-on role of coordinator.  Time will tell.

Is he a better candidate than one of the coaches lurking about, rumored to be the big catch of the offseason even before the offseason starts?  You know the coaches – P.J. Fleck, Les Miles, Charlie Strong, Lane Kiffin, etc…  We don’t know that Allen is better than those guys because as far as we know, they were never compared and contrasted (anytime I write about IU, I feel compelled to use that phrase, just as I saw it in so many essay exams on that campus) against Allen.

Glass didn’t sit with those coaches to confirm his belief that Allen is the superior candidate.  Glass might be right, and Allen might be the answer to the question of the ages – who can launch IU Football into an era of prosperity unseen in Bloomington since some kid in Bedford invented football by blowing up a dead pig.

Can’t fault Glass for being decisive as an athletic director, but if his belief in Allen is poorly invested, this hire might be viewed as an impulsive and rash call to keep players happy.

This has been a fascinating 24 hours in Bloomington – a great win by the basketball team over #3 North Carolina followed by the departure of a coach in the midst of leading the Hoosiers to bowls in consecutive seasons for the first time in a quarter century.

A strange day that will be remembered for a victory in basketball and a sharp pivot in football.