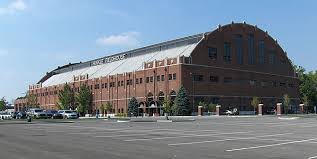 Butler did the near impossible tonight.  The Bulldogs out-executed and out-toughed Villanova.

It had to happen eventually.  Villanova’s reputation for grinding out wins possession by possession is well-earned, but tonight they didn’t have the same level of tenacity or crispness needed to beat a very good team on their own court.

So Butler got the 66-58 win in front of 10,000 Butler fanatics who were in fine form themselves.  “I’ve never heard Hinkle louder,” said Holtmann.

Not sure why it’s so much fun to watch this Butler team compete – a combination of history, culture, generosity, and grit, I suppose.

Butler had all that tonight, and they needed every bit of it.  The difference in this game can’t be found on the stat sheet, although Butler out-rebounded the Wildcats by nine.  Both teams took 51 shots.  Butler made every one of their 15 free throws while Villanova cashed on 14 of 17.

This game was about staying between your man and the bucket, rebounding with two hands, and making the extra pass.  Tonight was a fundamental basketball ground war, and Butler did everything it needed to as they pulled away late, while Villanova blinked and blinked and blinked after taking a four-point lead with 9:06 to play.

People will talk about this game, but not for long because this game is just what Butler has become as a member of the Big East.  Sure it’s the first time Butler has ever beaten a #1 team at Hinkle – at least the first time since the Earth cooled or voters cast ballots ranking college basketball teams – but this game is likely the first that one of the Big East’s best takes a very good team to task for not matching the Bulldogs level of fight and precision.

Great night at Hinkle.  Hopefully, the first of many like it.