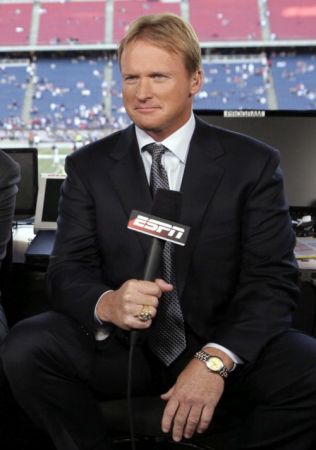 Chuckie is out, but there is a chance Jim Irsay isn’t done talking to potential replacements for GM Ryan Grigson or coach Chuck Pagano.

The beautiful dream that Jon Gruden might swap his ESPN headphone with one worn by the head coach of the Indianapolis Colts died today.

Gruden knows he is a better broadcaster than a coach, and so he’s decided to stay in the booth rather than continue to engage in negotiations that likely would have yielded a deal in the neighborhood of 10-year, $100-million to run the football ops in Indy in the same way Bill Belichick and Pete Carroll do in New England and Seattle.

That was the hope of Colts fans – and Colts owner Jim Irsay, who knows plenty enough about football to see that the hires he made in 2012 were not his best work.

The truth is that Gruden was never the greatest coach in Oakland and Tampa, (95-81 regular season record leading the Raiders and Buccaneers, and a 5-4 mark in the playoffs buffeted by the Bucs 3-0 run to a Super Bowl Championship in 2002), but he represented hope for a fanbase in desperate need of glad tidings.

The Colts are coming off back-to-back 8-8 seasons, and the two worst defensive seasons since the team moved to Indy in 1984.  That defense has significant holes that may erode into gaping chasms over the next seven months through free agency and age.

Sack master Robert Mathis has retired.  Safety Mike Adams, 35, and OLB Trent Cole, 34, will be free agents.  CB/safety Darius Butler will be 31 and a free agent.  Art Jones and D’Qwell Jackson will almost certainly be cut to save cash on grotesque deals that represent two of the worst investments of Irsay’s cash by general manager Ryan Grigson.

That means that whomever is running the show for Irsay will have some heavy lifting to do as the defense is rebuilt virtually from the studs up.

Fans and Irsay understand that expecting Grigson – the guy responsible for this mess – is among the least likely men in football to clean it up and get the defense right.  2013 First rounder Bjoern Werner and D’Joun Smith were supposed to be productive starters.  Whomever might have been taken with first rounders dealt for fat running back Trent Richardson and used on receiver Phillip Dorsett might have been defensive pillars.

As Irsay decides who the GM should be, he would be wise to list the top 20 guys he would trust to get the job done.  If Grigson’s name doesn’t appear on the list, bringing him back would be bad business.

The search may continue with Gruden’s name off the board, or Irsay may commit to allow Grigson and head coach Chuck Pagano chop wood for another year as the AFC South improves over the top of the Colts as he waits for exactly the right guy to come along.

Exactly how mediocre are the Colts since Grigson and Pagano took charge in 2012?  Against the worst division in football, they are dominant.  Even with a 3-3 mark in 2016, the Colts boast a 23-7 mark versus the AFC South.

Against the rest of the NFL, the Colts are 26-24.  Against the New England Patriots and Pittsburgh Steelers?  A combined 0-8.

The Colts offense is good enough to carry them to wins against the dregs of the league, but championships are won by beating the Patriots and Steelers.

The reported conversation with Gruden reveals Irsay knows what fans believe – hope for a championship during Luck’s prime will be postponed for another year if Grigson and Pagano return.

Hope didn’t die today with the reports that Gruden will stay at ESPN, but it was kicked down the road.