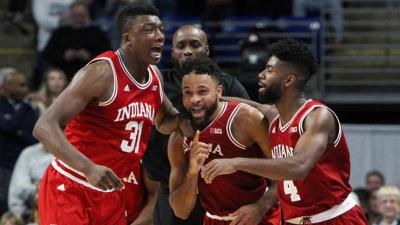 James Blackmon silenced the fans in Unhappy Valley with a three-point dagger. Then he validated their invective by shushing them.

James Blackmon Jr. hit a hell of a shot last night to save the Hoosiers bacon after they allowed Penn State to erase a 13-point deficit in the last five minutes of the game.

Then he went “Shhhh!”

I tweeted about it.  Didn’t like it.    Most agreed, some didn’t, and those who didn’t reminded me of the idiot fans from Penn State.

They got personal and unpleasant.  I ignored most, and blocked one.  Their tweets were either designed to get me to respond, or just be hurtful in some way that fills an emptiness in their lives.  That’s not my game, so when I did respond, it was to either explain (almost always a waste of time) or to try to let them know they should save their silly rants for someone who is invested in their opinions.

I wasn’t raging against a gleeful kid rightfully celebrating, but trying to communicate what legendary emperor and smart guy Marcus Aurelius did when he wrote, “The best revenge is to be unlike him who performed the injury.”

When someone makes a comment or acts in a way designed to piss you off, the most powerful response is to completely ignore the person.  Responding to disrespect with an equal or greater dose of disrespect communicates how thin-skinned you are.

That is exactly what the fans at Penn State wanted – not the three-point dagger from Blackmon – but the response to show that their harassment bothered him.

When you play in a hostile environment, acknowledging fan blather only strengthens them.  Winning an argument with an idiot is impossible because an idiot never listens long enough to realize he is wrong.  Winning a verbal sparring match with fans is equally impossible as your participation represents winning to them.

No question fans can be heinous, vicious, and acrimonious, but the right way to deal with them is to hit them where it hurts.  Blackmon did that by knocking down the shot that sent them home miserable.

That should be enough.