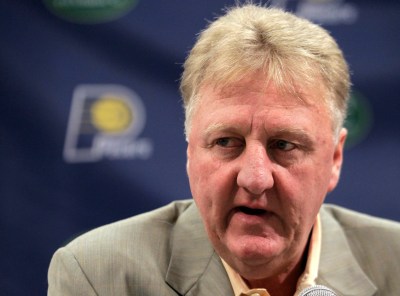 Larry Bird has completely made-over his roster in two years, but the Pacers are still mediocre.

On the game show “Let’s Make a Deal”, contestants can stand pat with a modest wad of cash, or trade it for what’s behind the curtain.  Sometimes it’s a new car, and other times it’s a goat.

Stick with mediocrity, or risk it for a car or a goat.

That’s the Indiana Pacers right now.  They are an OK team, one game above .500 at the All Star Break.  President of basketball ops Larry Bird can trade for what’s under the box, behind the curtain, or behind Door #1.

The problem is goats could be behind all three!

The Pacers are one of the NBA’s most mediocre teams with a roster cobbled together through a few draft successes, a couple of decent trades, and a few middling free agent signings.

They can’t rebound and won’t defend.  The competitive fire appears to have been extinguished by a rain shower that continues to fall from the dark clouds all-star Paul George cited last night as hovering over the Pacers after they lost to the Wizards 111-98.

Deal Paul George.  The Celtics covet George.  They own this year’s Brooklyn Nets first rounder, which will be in the top four of a very strong draft.

That could provide an additional young piece of the puzzle that includes developing superstar Myles Turner.

Buying low and selling high is good business, but not always great in building a basketball team.  Getting a potential #1 for the guy taken #10 in 2010 would be nice depending upon the other pieces the Pacers had to assume as part of making the money balance.

Stand pat.  Bird could choose to stick with the girl that brung him, which would mean the likelihood of a third act of this thoroughly dull season resembling the first two.  He could see the Pacers come together as a winning unit, or play like they are very happy where they are.

Deal spare parts.  He could try to find new homes for Monta Ellis, and the other spare parts that do as much to hamstring the Pacers on the defensive end as advance their cause offensively.  The only problem there is that the other 29 NBA GMs watch basketball too, and they know who can help and who can’t.

At some point, the decision needs to be made that .500 basketball in perpetuity is not a compelling product for a fan base still being re-energized.

A team foundering while awaiting multiple drafts to rebuild its roster is even worse.  If you don’t believe me, just ask Philadelphia 76ers fans.

Any direction is better than none.  I would like to see Bird and his staff try to find a way to abandon the middle, remove itself from the safe zone, and do what’s needed to put players on the floor who understand that winning – not earning – is the point of playing in the NBA.

That’s the mindset to which Paul George may need to be reintroduced.

2 thoughts on “Indiana Pacers – Mired in mediocrity, is it time for Larry Bird to play “Let’s Make a Deal””