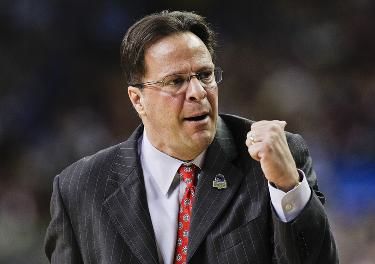 Tom Crean is doing all he can, but is it enough?

When I evaluate the work of others, my first step is to break the production of the employee into component parts.  By measuring contributions in individual silos, I tend to be more objective and through that objectivity discover whether my visceral gut feeling is accurate.

Let’s do that as well as we can from 35,000 feet with Indiana University basketball coach Tom Crean.  It’s especially appropriate because there are some in the IU fanbase who just don’t like Crean.  His sideline antics and complicated responses to simple basketball questions are off-putting to some, so let’s apply some objectivity to his leadership and remove the impulse to view him subjectively.

I’ve broken his responsibilities down to some elementary components – recruiting, results, academics and compliance, in-game scheming, and fundament instruction.

Recruiting – Crean is always given great credit for recruiting skill, and I have never understood why.  Yes, he found diamonds in the rough like Victor Oladipo and O.G. Anunoby.  That is good.  Not being able to entice a single top 10 recruit to Bloomington in his 10 classes is not good.

Since 2009, the State of Indiana has produced 20 top 30 recruits, as ranked by ESPN.  Indiana has signed three – Yogi Ferrell, Cody Zeller, and James Blackmon, Jr.  Some, like Mason Plumlee, were earmarked for Duke or another obvious destination, and nothing Crean could do would have stopped that.

The upcoming class is the most troubling though.  Four top 30 players in the 2017 class call Indiana home, and none will play for the glory of ol’ IU.  Instead, Indiana will welcome Justin Smith, who is ranked 80th, Clifton Moore, and Al Durham – who are both unranked.  One or all might be the next Oladipo, but we don’t know that yet.

Recruiting Indiana successfully is integral to winning at Indiana because if you can’t sell an Indiana kid on the notion of playing for IU, what kind of success can be expected in recruiting a kid from the east coast who can’t point to Indiana on a map?

Indiana kids know how to play the game at a unique level because that is what they do.  If it’s true that it takes 10,000 hours to become the best version of yourself at any discipline, Indiana kids are much closer to that threshold at a young age because many play and train relentlessly.

Sadly, private conversations with high school and summer basketball coaches in Indiana reveal that Crean has burned bridges with them, and as a result the recruiting well has dried for the Hoosiers in the Hoosier State.

Crean’s philosophy seems to be to recruit the best athletes he can with the longest reach.  The result for the 2016-2017 team has been a hodgepodge of talent ill-equipped to function together as a basketball team.

There is no obvious cultural mold to which Crean adheres in evaluating recruits.

Results – Indiana has boasted two Big Ten regular season champions over the last five years, has qualified for the NCAA Tournament four times, and won its way into the Sweet Sixteen three times.  In three of the last four years, IU will have finished outside the top four in the Big Ten, and has never qualified for the semifinals of the Big 10 Tourney under Crean.

Academics and compliance – No issues on either end, it would appear.  Kids graduate and the NCAA has only groused in Indiana’s direction once – and that was because of a little confusion over the calendar.  IU visited Hamilton Southeastern High School one day outside the open period to say hello to future Michigan State Spartan Gary Harris.

Indiana has delivered upon the promise of providing an education for student-athletes, and Crean should be commended for that.

In-game scheming – Indiana appears to be a jack of all trades, master of none operation on both ends of the floor.  Crean has built a labyrinthian network of offensive sets and defensive schemes that are designed to baffle opponents.  Unfortunately, they more than occasionally result in confusion for the Hoosiers themselves.

There are moments of clarity where the Hoosiers operate as an offensive machine capable of outscoring opponents, but too often turnovers are the result of unnecessarily complicated sets.

This season, Indiana ranks 27th among 351 Division One teams in offensive efficiency despite turning the ball over on 21.3% of its possessions (ranking 317th).  That’s not all bad, but when IU’s defense also ranks 317th in forcing turnovers, that is a poor recipe for success.

Fundamental instruction – The only way for the majority of Indiana fans and those who cover the Hoosiers to appraise the level of instruction is to watch the execution of the team and draw conclusions based upon that.  Good thing, because that’s always the best way to gauge the level of teaching.

Indiana has often been a fundamentally flawed team.  Blockouts are missed, turnovers are committed, defensive switches are poorly executed, closeouts allow penetration, and overall basketball awareness is so poor Indiana coaches have taken to holding up signs to communicate the most rudimentary hoops concepts – like “Don’t hop!” and “Call out screens!”

Under Tom Crean, Indiana has become disorganized and chaotic.  It seems that Crean’s brain is in hyper-drive throughout the game, which shows a lack of confidence in the instruction that occurs during practice.  When a teacher’s mind is cluttered, it’s likely his students will reflect that by focusing upon the granular while missing the big picture concepts.

Conclusion – The question we as fans, media, and Crean’s bosses and peers need to ask is whether there is someone else out there who can be attracted to Indiana who can check the above boxes at a higher level.

Another question is whether the confusion and chaos apparent in year nine of the Crean era is an anomaly or whether it is standard operating procedure in Bloomington.  The logical extension of that question is whether Crean’s ceiling at IU is the occasional Big 10 championship and a shot in the Sweet Sixteen every other year.

It’s been hard to watch the last four IU teams and hope for better days.  The team in 2013 was the zenith, and a return to that level of play seems a pipe dream.

Then the question we need to ask ourselves is whether that is enough to sustain our keen interest in the program.