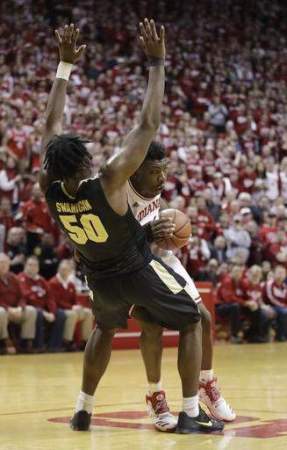 Whether this was a charge, double foul, or block may not have decided last night’s game, but it was an atrocious bastardization of the rules of basketball.

A double foul call may not have altered the outcome of the Indiana vs. Purdue tilt last night at Assembly Hall, but it sure appeared to be a ludicrous application of basketball justice.

IU’s Thomas Bryant drove to his left against presumptive Big 10 Player of the Year Caleb Swanigan as the Hoosiers trailed by five with :45 left in the game.  There was contact, and Swanigan fell.  Bryant hopped a bit and shot.  The ball found its way into the bucket.

Both Bryant and Swanigan were playing at that moment with four fouls, so when two officials blew their whistles, the ramifications of their decision to call a block or charge would be a serious change agent in the momentum of the game.

If the call went against Swanigan, Indiana would be down three and a foul shot that could cut it to two.  And Swanigan would be DQ’ed.  If the call was a charge, Bryant would be out of the game and it would be Purdue ball.

One ref called a block and the other a charge.  Officials are instructed to hold their calls in a situation like this until they can find unanimity.  Most of the time, a quick glance is all that is needed.

In this situation, both made simultaneous and dramatic gestures that were contradictory.  A rule exists that calls for this to be a double foul.  The ball is inbounded by the team that enjoyed possession of the ball at the sideline spot nearest the infraction.

All three officials met at length before deciding to split the baby, as the rule demands.

Both Swanigan and Bryant took a seat, and the game continued with Indiana converting two foul shots six-seconds later as Indiana cut the Boilermakers lead to three.

Ultimately, Indiana lost 69-64 – a loss that may keep them out of the NCAA Tournament.

While the rule was correctly applied, the level of officiating was poor.  It’s crucial for refs to communicate effectively or what happened last night can be the result.

The rule should require the refs to make a specific call against one of the players rather than letting themselves off the hook by executing a little known double foul call – or “Blarge”.

The crew should have done what is required of them by communicating before demonstrably making a potential game-changing call where one or neither ref might have had a tough angle.

Unfair to all is not a suitable replacement for an honest effort to make the right call.

One thought on “Indiana vs. Purdue double foul call correct but virtually unprecedented – feckless officiating at its worst!”